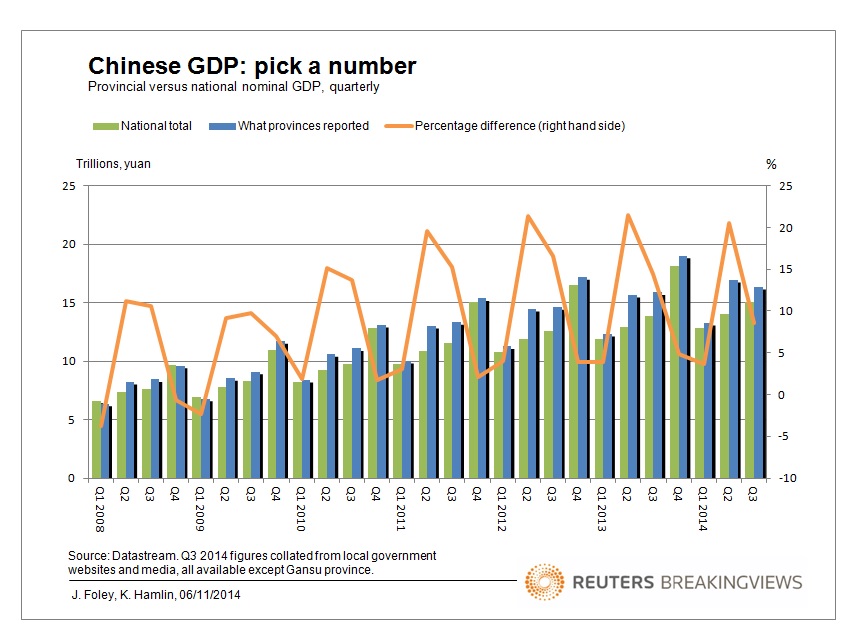 China’s days of picking a number for GDP growth and moulding the economy to fit are probably over. At the same time, its planners still seem wedded to symbolic statistical goals. Targeting a range for national output, rather than any single figure, would be an elegant way to square the circle.

Targets die hard in a Socialist system that still thinks in five-year plans. While some, like household income growth or job creation, are more like guidelines, GDP is different. The government sets a target at each spring parliament, and the country grinds into action. Local authorities tend to exceed the goal with wasteful investment and all-out number-fudging. The combined third-quarter GDP reported by 30 of China’s 31 provinces as of Nov. 5 exceeds the national total by 9 percent.

The problem is that GDP includes things China can’t control, like volatile net exports, which accounted for over 10 percent of incremental output in the first nine months of the year. When trade partners buy less, the temptation is to invest blindly to compensate. Suppressing the exchange rate used to give exports a boost, but increasingly the yuan is being used to attract or repel short-term flows of capital rather than help out exporters.

Setting a target range for economic growth would help. For example, China could say that GDP will increase by somewhere between 6 and 7 percent in 2015. Anything less than 6.5 percent may still sound like a miss, but would create disappointment rather than a crisis of confidence. Premier Li Keqiang has talked about “range-based” economics, though with little detail.

Behind the scenes, bureaucrats might still need their big-figure fix. Most local governments can’t fund their own budgets through direct borrowing, so the central government allocates funds with an output target in mind. But admitting that overall growth might rise or fall with global trade winds would remove the incentive to invest wastefully to meet the numbers.

It’s not clear whether Li and his peers are yet ready to shake things up. GDP targets are woven into China’s fabric like Mao and Marxism. But being a bit vaguer on next year’s growth would send a clear signal that China is moving in a good direction.

China’s inflation-adjusted GDP growth for 2014 is forecast to hit 7.2 percent, according to the average estimate of 26 economists polled by Reuters. That compares with a government target of 7.5 percent.

China reported 7.3 percent GDP growth for the third quarter of 2013. By Nov. 5, 30 of the country’s 31 provinces had reported regional, nominal GDP figures totalling 16.4 trillion yuan ($2.7 trillion). That exceeded the national third-quarter figure by 9 percent, according to a Breakingviews calculation based on government releases and local media websites.

The World Bank predicts China’s GDP will expand by 7.4 percent in 2015, but Karlis Smits, a senior economist, told reporters on Oct. 29 that a 7 percent growth rate would not hurt the labour market.

The International Monetary Fund has also predicted 7.4 percent growth rate for China in 2014, falling to 7.1 percent in 2015.

China’s state council tends to announce its growth target at the annual parliament session in spring. The last session of the National People’s Congress took place in March 2014.

Premier Li Keqiang said in October that China’s leaders would have greater tolerance for “fluctuations” in economic indicators. Speaking to delegates at the World Economic Forum in September, he said that GDP growth was on target based on a principle of “range-based macro control”.