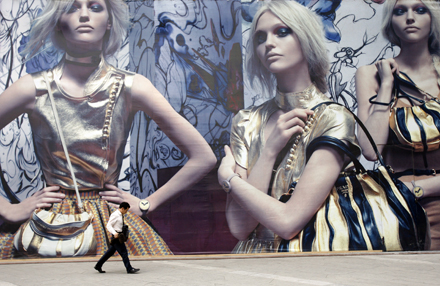 Want a vivid picture of Chinese inequality? One day an auction in Hong Kong set a record price for an early Qing dynasty painted snuff bottle; the next day the government reclassified around 100 million people as living in poverty. The disconnect between China’s rich and the rest is becoming more visible. Signs of an economic slowdown could make the divergence unsustainable.

From the factory floor, China’s near future looks uncertain. Worker strikes are sprouting in the southern manufacturing heartland while manufacturing activity has slumped to a 32-month low, based on HSBC’s PMI survey, as trade from the troubled euro zone slows. Markets started to get the picture on Nov. 30, pushing down stocks in Shanghai by 3.3 percent after a central bank advisor suggested there would be no quick monetary fix.

Yet seen from the penthouse, it’s still gangbusters. Trade in “Veblen goods” – items that get more desired as they become more expensive – is strong. The snuff bottle was part of a gilded pattern. In the same auction, a series of fan paintings went for 100 times their estimated price. A little down the luxury scale, Italian fashion house Prada reported over 50 percent growth in China sales in the third quarter, year on year.

In good times, such conspicuous consumption on luxury goods looks like progress, a mark of a country getting richer. But when times are tough, it looks like callous waste of funds that could otherwise be invested productively. China’s rich can’t easily spirit their money away, because of capital controls. But they can opt out in other ways – by pumping their wealth into snuff bottles, handbags and overvalued real estate.

Chinese society is in a tricky place. True, those 100 million rural poor are almost certainly better off than they were a decade ago – especially now they qualify for poverty alleviation measures. But the growing middle classes are more demanding and probably more sensitive to the extravagance of the elite. If the very rich want to avoid political and popular ire, they should plan to make some conspicuous concessions.

A man walks past a billboard for Prada in Beijing.

Shanghai’s benchmark index slumped 3.3 percent on Nov. 30, ending the month down 5 percent, after a central banker dashed hopes of imminent monetary easing. Xia Bin, who advises the People’s Bank of China, said that the bank would “fine tune” its “prudent” monetary policy.
China raised its official poverty line to just under $1 a day on Nov. 29, according to the official Xinhua News Agency. The recalibration would see an extra 100 million people become eligible for anti-poverty measures, according to experts cited in state media. Some 27 million rural dwellers were officially classified as living in poverty at the end of 2010.
An auction of Chinese ceramics and artworks in Hong Kong by Bonhams saw a record price achieved on Nov. 28 for a painted snuff bottle from the early Qing dynasty. The bottle sold for over $3 million, against low-end expectations of $630,000. A collection of fan paintings estimated to be worth from $10,000 ultimately sold for $1.3 million.
Prada, the Italian luxury goods maker listed in Hong Kong, announced a 75 percent increase in earnings for the third quarter, year on year. Greater China sales grew 50 percent in the first nine months of the year, compared with the same period in 2010, excluding currency effects.