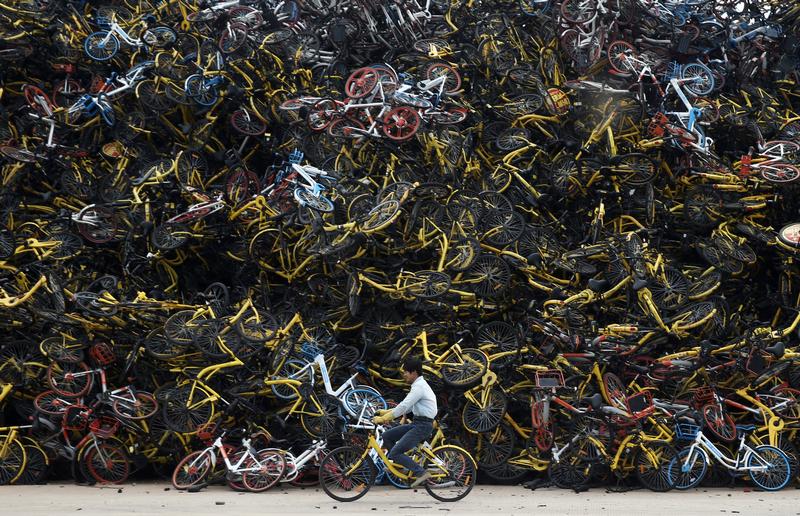 A plague of two-wheeled startups has exhausted investor cash and municipal patience. After a cull, the biggest survivors, Mobike and Ofo, will resist calls to form a monopoly. Instead they will chain themselves to other shared-economy winners like taxi app Didi Chuxing.

A worker rides a shared bicycle past piled-up shared bikes at a vacant lot in Xiamen, Fujian province, China December 13, 2017. Picture taken December 13, 2017. REUTERS/Stringer ATTENTION EDITORS - THIS IMAGE WAS PROVIDED BY A THIRD PARTY. CHINA OUT. TPX IMAGES OF THE DAY - RC16B19B1FA0

The chief executive of Bluegogo, China's third-largest bike-sharing company, said in a public letter posted online he had "made mistakes" and that the firm was closing down, Reuters reported on Nov. 17. The company claimed to have over 15 million registered users. That followed a similar closure by Chongqing-based Wukong Bike in June.

In late October, Shanghai-listed bike-sharing company Youon Technology said on its website it would merge with Hello Bike. On Nov. 9, it announced in a statement posted on the website of the Shanghai stock exchange that it had signed a strategic framework agreement with a Beijing company to cooperate on car sharing.

Zhu Xiaohu, founder of GSR Ventures, an investor in bike-sharing startup Ofo, said in September that it is time to consider a merger of bike-sharing market leaders Ofo and Mobike, in a speech in Shanghai quoted in local media. Various media outlets reported in October that the investors in both companies were holding talks on how to engineer a merger.

China's government expects the "sharing economy" to grow about 40 percent in 2017 to 4.8 trillion yuan ($705 billion), Reuters reported. By 2020, the government expects it could account for around one tenth of China's gross domestic product.