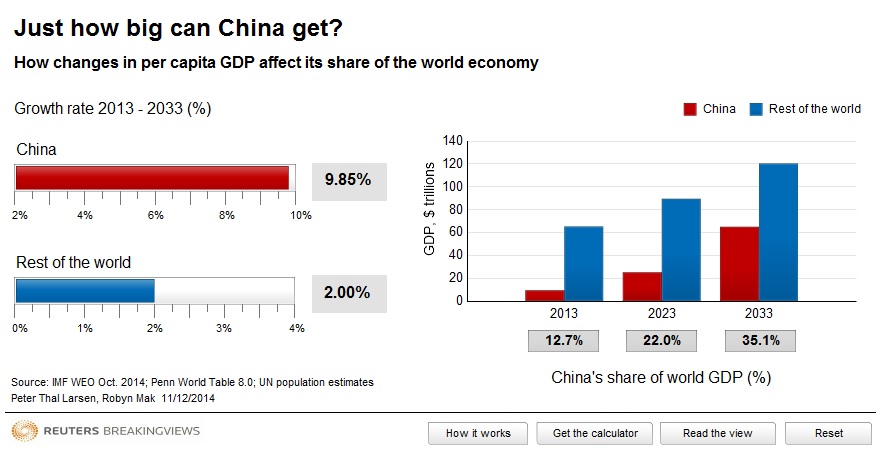 How fast will China’s economy grow over the next two decades? Most economists predict that the People’s Republic will expand at a rate not much lower than it has achieved in the past. Viewed in global terms, that assumption looks a stretch. A new Breakingviews calculator shows why.

China’s GDP per head grew by an astonishing 9.85 percent a year in the first decade of the millennium. If expansion continued at the same rate, Chinese output would reach $65 trillion by 2033 – almost seven times the 2013 total. Assume GDP per capita in the rest of the world goes on expanding by 2 percent. China’s economy would account for more than 35 percent of the world in two decades. That would be an even bigger proportion than it achieved in 1820, before the country slipped into a century of stagnation relative to the West.

Most economists accept that double-digit growth is in China’s past. However, many think the economy is still capable of expanding at a rate only slightly slower than the 7.5 percent it hopes to achieve in 2014. Even that seems ambitious over the long term, however. If China’s GDP per capita grows by 6.45 percent a year for the next 20 years – similar to the rate Japan achieved between 1963 and 1983 – China’s share of world output would almost double to just over 22 percent.

Past growth owed much to a relatively young population moving from the countryside to work in urban factories. In the future, China’s population will age and its workforce will barely expand. Garnering more than a third of global output would require Chinese workers to deliver heroic improvements in productivity. Technological advances may help – though it seems unlikely that China will be able to avoid sharing these with the rest of the world.

An alternative possibility is that China’s growth slows to an annual rate of about 2 percent. That is what Harvard economists Lawrence Summers and Lant Pritchett argue tends to happen after countries exhaust their growth spurt. China’s four-decade expansion is unprecedented in modern history. But its sheer size today makes sustained superlative growth even more improbable.

Extrapolating past growth rates for China and India into the future produces an Asiaphoria – “a view that the global economy will increasingly be shaped and lifted by the trajectory of the Giants,” Lawrence Summers and Lant Pritchett wrote in a paper published by the National Bureau of Economic Research in Oct. 2014.

The paper studies historical periods of high economic growth and concludes that they bear little relation to growth rates in future years.