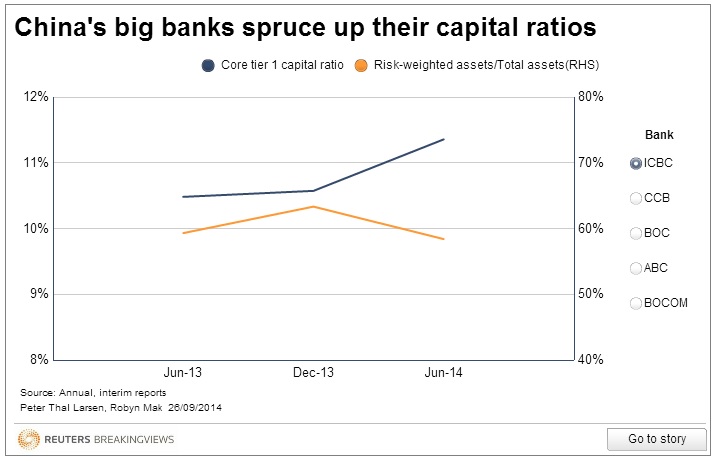 Chinese banks are learning Western capital tricks. The country’s largest lenders have changed the way they measure the riskiness of their loans. For most, that has made capital ratios look healthier. It’s another reason to question Chinese banks’ balance sheets.

A bank’s capital ratio is based on two numbers: its stock of capital divided by its assets, adjusted for risk. Most big Western banks calculate risk-weighted assets (RWAs) by using models that assess the likelihood a loan will go bad based on historical experience. Now Chinese banks are catching up: regulators recently gave the country’s largest lenders the green light to use internal models to help calculate their RWAs.

The impact is striking. Interim results showed that the capital ratios of four of China’s five largest banks improved significantly between December and June. Only Agricultural Bank of China saw its ratio decline.

Bank of China’s interim report spelled out how the change in calculations helped. Under the old approach, its core equity capital ratio would have declined to 9.36 percent at the end of June. But the new method depressed its RWAs, helping to boost its capital ratio to 10.11 percent.

Another way to gauge the shift is to look at the banks’ overall balance sheets. If total assets consistently grow faster than RWAs, it can be a sign that banks are massaging their capital ratios. Between December and June, the ratio of RWAs to total assets declined at four of the five largest banks.

Bankers argue that internal models are a better measure of risk than risk-weightings set by regulators, and that Chinese banks are only catching up with their global peers. Besides, any boost should be a one-off.

Nevertheless, there are reasons for concern. Chinese banks have enjoyed more than a decade of rapid growth, and surprisingly few defaults. Models based on this record almost certainly understate loan risks. It’s also striking that the shift to internal models has coincided with a big drive by Chinese banks to raise capital by selling bonds at home and abroad. The expectation that the Chinese government will always support its big banks may allow investors to pay less attention to the finer points of their capital ratios. Even so, it’s another reason to doubt their apparent rude health.

BoC and ABC are also planning to issue preferred shares.

BoC and ABC are also planning to issue preferred shares.