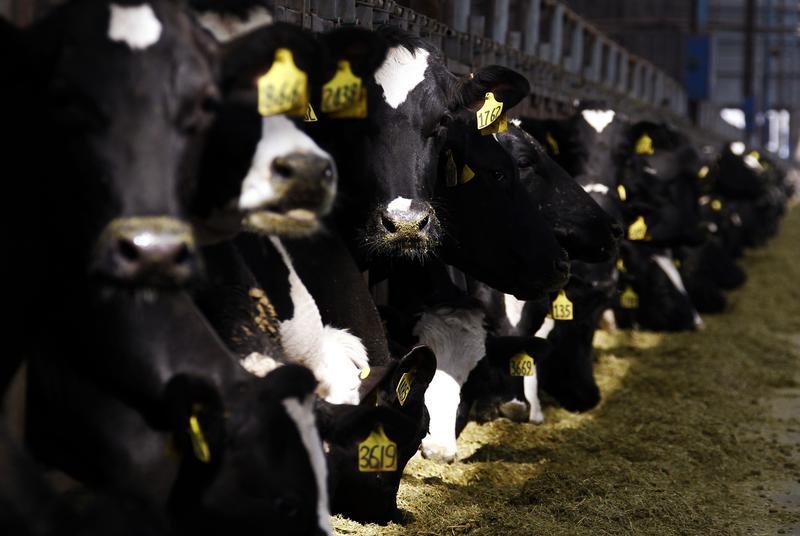 The world’s biggest milk importer is taking a break from its dairy diet. The price of milk-related products tracked by auction platform GlobalDairyTrade has fallen 25 percent since January. Though the decline is partly due to improving supply, demand from voracious buyer China has also fallen. That lull is unlikely to last.

China’s growing thirst for dairy has pushed up world prices in recent years. The country has a shortage of raw milk, and relies on foreign powder to make the baby formula, milk drinks and yoghurts its increasingly affluent population desires. Past scandals have also made consumers wary of domestic products.

This year, better weather has helped to boost world output. That has had a big effect on export prices: just 15 percent of total milk production sold outside the country where it was produced, according to a presentation last year by Fonterra, the world’s largest dairy exporter.

What’s less clear is why Chinese imports have slacked off. While domestic production is improving, it’s also possible that companies in the People’s Republic have stockpiled milk powder. Supplies typically rise around the start of the year, when New Zealand exporters rush to take advantage of a limited preferential tariff.

A more alarming possibility is that Chinese are consuming less dairy. Companies like Want Want, which makes flavoured yoghurts and milk drinks for children, have passed on higher prices to customers. Any sign that China’s milk bubble is deflating would be devastating for companies that have bet heavily on Chinese consumption gradually rising to developed-world levels.

Yet the decline should not be overstated. Fonterra is forecasting that the price it pays to farmers in the year to May 2015 will drop by 17 percent to NZ$7 ($5.90) per kilogram of milk solids. That’s still above the seven-year average of NZ$6.63 according to ANZ analysts.

Besides, China’s lactose intolerance is probably temporary. The country imported roughly a third of its whole milk powder last year, according to the United States Department of Agriculture. Barring a reversal in the rising trend of dairy consumption – or a sudden increase in domestic production – China will have to come back to the global dairy market sooner rather than later.

Cows are seen at a barn on the 35-hectare farm managed by New Zealand dairy export giant Fonterra Co-operative Group in Hangu County, near the city of Tangshan, around 250km (155 miles) east of Beijing March 15, 2012.

The cost of whole milk powder sold on GlobalDairyTrade has fallen 27 percent over the same time period to $3,594 per metric tonne.

The world’s largest dairy exporter on May 28 forecast it would pay farmers – which are also its shareholders - a price of NZ$7 ($5.90) per kilogram of milk solids for the year to May 2015.

Fonterra’s farm-gate milk price is a calculation based on the theoretical revenue earned if the company processed all its milk into standard dairy commodities and sold them on the global market at prices seen on GlobalDairyTrade. The company then deducts the amount it would cost to produce the dairy commodities. Fonterra also has the right to retain a portion of the theoretical farm-gate price for corporate use.

The U.S. Dairy Export Council estimates China accounted for close to 25 percent of world dairy trade in the first quarter of 2014.