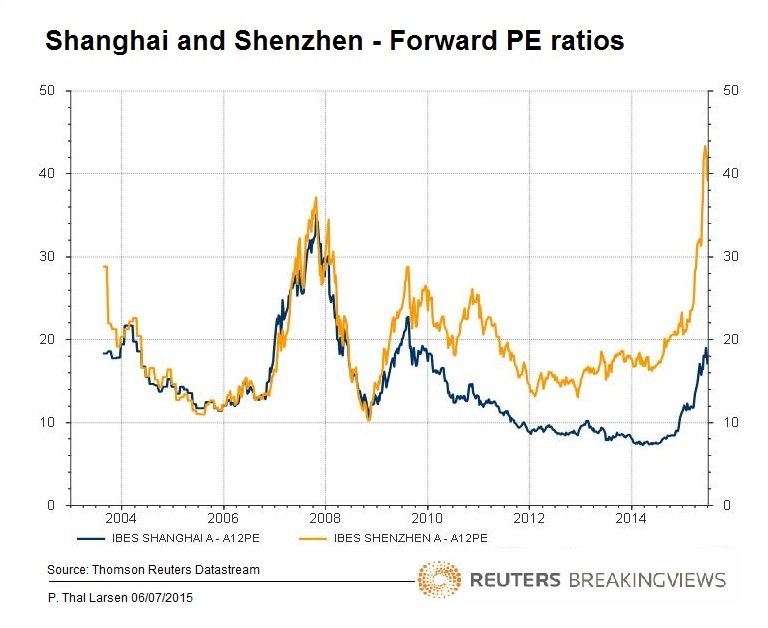 For all the Chinese authorities’ increasingly overt meddling in the market, Chinese shares are still looking expensive. Even after the country’s main market indices plunged roughly 30 percent in three weeks, on any fundamental analysis, they have further to fall.

Imagine Chinese stocks give up all the gains they made in the past nine months. That’s effectively how the country’s last equity bubble in 2007 and 2008 ended. If Shanghai’s SSE Composite Index returned to where it was last November, it would fall by roughly a third from its closing level on July 3.

Alternatively, look at relative valuations. Annual earnings growth for Shanghai-listed shares has turned negative, according to Morgan Stanley, from 7 percent this time a year ago. The Shanghai index now trades on about 19 times expected earnings for the next twelve months, according to Datastream, well above the average of around 14 times for other emerging markets. The racier Shenzhen index, which attracts smaller and more speculative companies, trades on a forward multiple of 39.

Another way is to compare Chinese companies listed in Hong Kong with the same companies listed on the mainland. Back in early November, shares on both markets were worth roughly the same. By early June, mainland-listed shares were trading at a 43 percent premium. Even now, the gap is 24 percent. This measure captures mostly large state-owned groups, not the smaller companies whose shares have risen even faster.

There’s no reason to believe that owners of China’s 90 million share-trading accounts will start doing fundamental equity analysis any time soon. The boom was driven by an explosion of margin lending and belief that the government would support the market. Investors are now unwinding leveraged positions, and question whether the authorities can do much to help.

The government isn’t giving in yet. It has frozen new share offerings, and institutions are under pressure to buy. But even a mooted $19 billion stabilisation fund looks small next to roughly $3 trillion worth of freely tradeable shares, and combined average daily trading in Shanghai and Shenzhen of over $200 billion. If fundamental factors matter, Chinese share prices are still too high.

China froze share offers and set up a market-stabilisation fund as Beijing intensified efforts to pull stock markets out of a nose-dive.

In a series of announcements, China’s top brokerages pledged to collectively buy at least 120 billion yuan ($19.3 billion) of shares to help steady the market, and would not sell holdings as long as the Shanghai Composite Index remained below 4,500. The China Mutual Fund Association said 25 fund companies also pledged on July 4 to buy shares. Another 69 fund firms said on July 5 they would do the same.

Later, 28 Chinese firms announced in individual statements they would suspend their own initial public offering plans due to market volatility.

China’s Securities and Regulatory Commission said on July 3 it would reduce the number of IPOs and other capital-raisings. The regulator has also announced relaxed rules on using borrowed money to buy stocks, and set up a team to look at “clues of illegal market manipulation”. China’s two main stock exchanges plan to lower transaction fees by 30 percent from August.