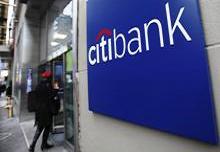 Citigroup’s stock looks perfectly priced – for more mediocrity. The mega-bank’s $3.9 billion first-quarter profit was no disaster. Unlike JPMorgan, the firm run by Michael Corbat beat analysts’ estimates. Its bad bank, Citi Holdings, is no longer much of a drag. And the bank even managed to utilize a chunk of its substantial tax breaks and thus boost capital. For now, though, shareholders don’t have much more to cheer about.

After Monday’s better than expected showing, Citi’s shares jumped as much as 4.4 percent. But even with that the bank is trading at just 83 percent of its tangible book value, the only major financial firm currently stuck at less than its net worth.

The discount makes sense based on Citi’s reported earnings. Annualized return on equity for the first three months of the year was 7.8 percent, below the 10 percent rule-of-thumb threshold for banks to cover their cost of capital.

Yet Citi is not the only player with subpar numbers. Bank of America and Morgan Stanley are also saddled by single-digit return on equity. The difference is that those fellow laggards have more tools for trying to change that.

First, the Federal Reserve has approved their plans to increase dividends – fivefold, in BofA’s case – or to buy back stock, or both. The former boosts the total return to shareholders, while the latter improves ROE simply by reducing the amount of equity. The Fed nixed Citi’s plans to return cash to investors because the regulator wasn’t satisfied with the bank’s method for measuring and reporting risk.

The latest scandal to hit Corbat’s firm underlines that issue. Last month, Citi revealed a $400 million hit at Banamex, its Mexican unit, stemming from fraudulent loans extended to a major supplier of oil giant Pemex. Citi confessed on Monday that it had found another perpetrator, though this one may have cost it less than $30 million.

That’s a worrying sign for a bank that needed government bailouts to stay afloat in the financial crisis. Fold in its inability to return capital to investors and a lack of options for boosting earnings and it’s a stretch for Citi to join peers above book value.

A woman walks into a Citibank branch in New York January 17, 2012. REUTERS/Shannon Stapleton

On April 14 Citigroup reported first-quarter net income of $3.9 billion, or $1.23 a share. Excluding items that include a $210 million tax charge and changes in the value of its own liabilities, earnings hit $4.1 billion, or $1.30 a share. The consensus estimate of sell-side analysts was $1.14 a share. Revenue of $20.1 billion beat the estimate of $19.4 billion.

Citi revealed that it has found a second case of fraud related to suppliers of financing to Mexican oil giant Pemex. Finance chief John Gerspach would not reveal the name of the company involved but told reporters the amount involved was “less than $30 million” and that the bank expected to get all of it back.

Last month Citi announced that it was taking a $235 million after-tax charge after finding problems in the receivables department of its Mexican lender, Banamex. The unit had loaned $585 million to Oceanografia, a supplier to Pemex, but realized $400 million was fraudulent.