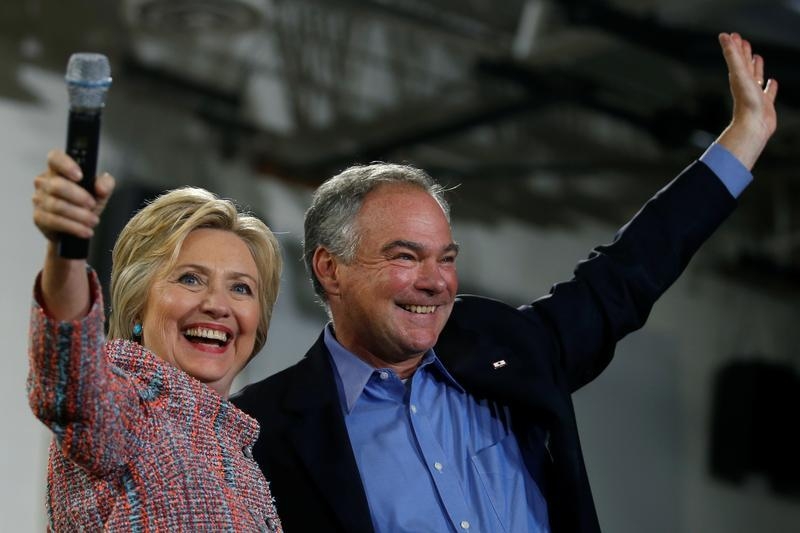 Hillary Clinton and Tim Kaine are now America’s defending duo of globalization and free trade. The Democratic presidential candidate selected the Virginia senator as her running mate on Friday. The former governor is a moderate who has backed trade deals. One of their first tasks is to win over liberals and Rust Belt voters who supported Bernie Sanders, and are being vigorously courted by Donald Trump.

The unimpeded flow of goods, services, capital and above all, people, has been under attack in this year’s campaign, as it was in Britain’s referendum on EU membership. Sixty percent of voters believe international trade has led to job cuts in the United States, while 55 percent said the country has lost more than it has gained by opening to the world, a CBS News/New York Times poll in July showed.

Vermont Senator Sanders, who proved to be a tough opponent for Clinton before bowing out of the race earlier this month, blasted the Trans-Pacific Partnership as a deal that hurts American workers. Trump has also threatened to scrap the pact with 12 Pacific Rim countries and mentioned his shared views with Sanders twice during his acceptance speech at the Republican convention on Thursday.

The TPP backlash forced Clinton to rein in her support of the pact. But once she clinched the nomination, she rejected efforts to include attacks on the deal in the Democratic Party platform, despite heavy pressure from the Sanders camp.

Kaine has been a strong supporter of trade agreements and voted to give President Obama “fast-track” authority for the TPP. That meant Congress couldn’t change the terms of the deal and could only give a yes or no vote. In 2014, for the 20th anniversary of the North American Free Trade Agreement, Kaine noted in a speech that 40 percent of the parts in Mexican imports came from the United States, making it a win-win situation for both countries.

Most economists believe trade deals boost overall growth and exports, but bipartisan supporters have not been able to articulate the benefits in a way that resonates with blue-collar workers. They have been particularly hurt, with 5 million U.S. manufacturing jobs lost in the last 15 years. Explaining to everyone else why globalization is an unstoppable, and mostly positive, force for economic empowerment is a difficult task – one that Clinton now has someone to help her with.

Democratic presidential nominee Hillary Clinton chose Senator Tim Kaine of Virginia to be her running mate on July 22. The former secretary of state will appear with Kaine at an event in Florida on July 23. Kaine, who was also governor of the swing state of Virginia, is seen as a safe choice because of his moderate views.

The party's four-day convention kicks off on July 25 in Philadelphia, and Clinton will officially accept the nomination on July 28. At the Republican Party convention that ended on July 21 in Cleveland, Donald Trump officially became the GOP’s presidential nominee. He chose Indiana Governor Mike Pence as his vice-presidential pick.