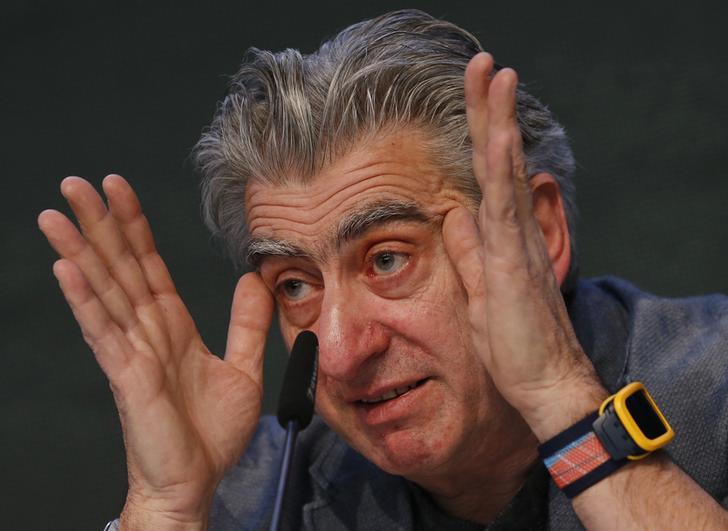 Just as the global watch market begins to put China’s growth-stunting corruption crackdown in the rearview mirror, Apple Watch appears on the horizon. Nick Hayek, the CEO of Swatch, doesn’t look concerned by the iPhone maker’s arrival on his patch. He should be.

Among Swiss watchmakers, who together produce around 30 million timepieces a year, Swatch looks the most vulnerable. Although it carries premium brands like Breguet, Harry Winston and Omega, up to half its sales are in the lower- to mid-priced “masstige” market – the one Apple is aiming at.

Hayek says he has no interest in mimicking Apple’s “mini mobile phone on your wrist.” But the design of the new “Swatch Touch” smartwatch looks unfortunately like a 1980s walkman. If the Apple range takes off, Swatch will clearly be at a design disadvantage in any smartwatch war.

The group reckons only 10 percent of its business will compete with the tech giant’s watches. But Barclays estimates that at the basic model’s $349 starting price, a quarter of Swatch’s sales could be vulnerable, with operating profit taking an 11 percent hit.

Swatch hasn’t shown much inclination to move its more vulnerable brands out of the line of fire. That would mean a push upmarket, where Apple cannot compete with the craftsmanship that goes into very high-end timepieces.

This wouldn’t be an easy manoeuvre to pull off. Many of its prestige brands already compete with the likes of Cartier-owner Richemont, which is largely insulated from Apple’s moves by its premium pricing. Eikon data shows Swatch is trading at an 18 percent forward price-earnings ratio discount to Richemont, partly on Apple Watch concerns.

Elmar Mock, a co-inventor of Swatch, is predicting “an ice age” for the Swiss watch industry. He says the last time the sector was this complacent, the arrival of Japanese quartz watches in the 1980s wiped out 60,000 jobs. The Hurun Research Institute’s latest report on Chinese luxury also spells trouble. Apple products became the No. 1 luxury gift in 2014 in China, with watches slipping down the ranking.

Whether consumers need a watch that allows friends to share heart rates remains to be seen. But Hayek can’t just pray for an Apple Watch flop. He would do well to work up more of a sweat.

Apple launched on March 9 its long-awaited smartwatch. Its Sport model retails at $349, while an 18-karat rose gold version will cost $17,000.

Swatch, the Swiss watch group, unveiled its riposte on March 12, announcing a plan to put cheap programmable chips in watches that will let wearers make payments with a swipe of the wrist.

CEO Nick Hayek said at a news conference: “we don’t want to produce a mini mobile phone on your wrist. Others can do that.”