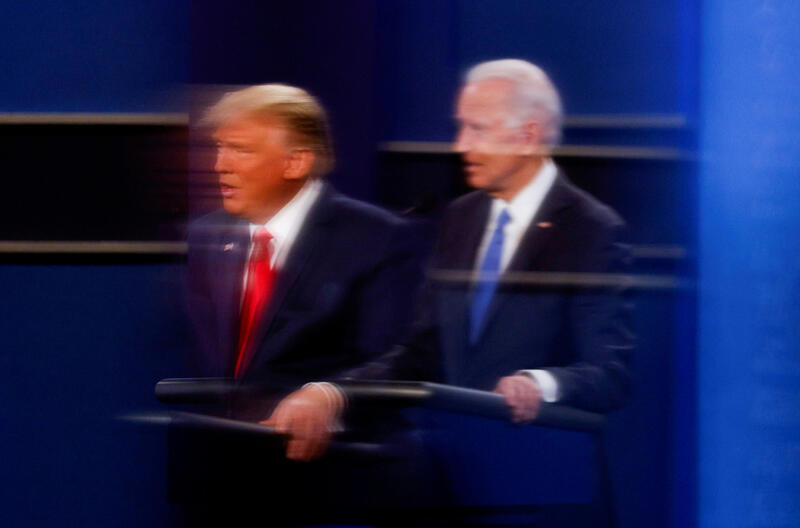 It may be days before America’s presidential election produces a clear winner. That’s an eternity for markets used to prices that move over microseconds. But whether Donald Trump or Joe Biden emerges victorious, investors can already guess what the next government will look like: pretty weak.

The electoral map is in a purple haze. Mail-in votes are still being counted in some pivotal swing states – including Michigan, Wisconsin and Pennsylvania – whose votes will likely determine which candidate is inaugurated on Jan. 20. The Senate also remains in play. Currencies of trade partners like China and Mexico weakened sharply on Tuesday night. S&P 500 Index futures popped 2% as the count progressed. Both suggest faith in a Trump win, but only tentatively.

It’s possible, though, to make out some broad outlines. Even if Biden wins, he’s less likely to benefit from the so-called blue wave – where Democrats gain control of Congress and the presidency. That’s bad news for the more ambitious parts of his agenda, like expanding a government-backed alternative to private health insurance, doubling the tax rate on capital gains for very high earners, and investing trillions in green infrastructure.

Likewise, a triumphant Trump might be hemmed in by a wafer-thin Republican Senate majority, or none at all, with a Democratic lower house. True, he hasn’t outlined much in the way of policies, beyond slogans like “Create 10 Million New Jobs in 10 Months” and “Hold China Fully Accountable for Allowing the Virus to Spread around the World.” But a cut to the already low 21% corporate tax rate may be out of the question.

For some, a divided or feeble government is a Goldilocks situation – with checks on both progressive policy and Trumpian impulsiveness. Take Wall Street. With no blue wave, tougher regulation becomes unlikely – including the break-up of big banks threatened by Democratic Senator Elizabeth Warren. Plans to regulate internet companies like Facebook may get bogged down in partisan squabbling. And a government that can’t or won’t pass aggressive climate legislation would benefit oil majors like Exxon Mobil.

The weakness, though, could come at a cost for many Americans. For one, it could hold up much needed Covid-19 relief. Academics at Oxford’s Said Business School found the share of unemployed Americans struggling to pay their bills doubled between August and October. The longer it’s unclear who’s in charge, the harder it will be to corral major fiscal spending. If it begins to look like Biden has won, Trump and Republican legislators may be even less inclined to take action during his final two-and-a-half months in office.

Markets can probably handle a degree of uncertainty. After all, investors already expected some turbulence. The Nov. 3 level of the VIX, a measure of equity market volatility, was almost double the 2016 election day level. And the Federal Reserve proved in March, when Covid-19 derailed markets, that it will do whatever’s needed to keep the financial machinery functioning. A slow path to a hamstrung government would be a shame. It should not, though, be a shock.