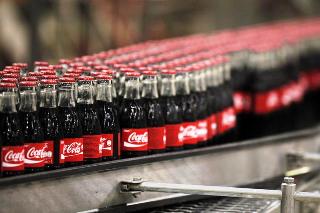 Merging three of the drinks giant’s bottlers could create savings worth around $2.8 billion. The new company may even sell a few more sodas. But an undeniable draw for Coca-Cola Enterprises owners is that after the deal the group will have less need to keep the U.S. taxman sweet.

Bottles of Coca-Cola are seen at their bottling plant in Clamart near Paris. Coca-Cola Company hit the market with an aggressive US$4.5bn deal last week. The company’s largest trade yet, it will take out expensive bonds and align the issuer’s capital structure about a month after its acquisition of its North America bottling operations.

Three of Coca-Cola’s European bottling companies announced a merger on Aug. 8, pooling their operations in a new, tax-efficient structure.

Coca-Cola Enterprises, which bottles and sells drinks in western European countries, will own 48 percent of the new company, which will be called Coca-Cola European Partners. The combination aims to create pre-tax synergies of between $350 million and $375 million within three years.

The other two members of the trio are Coca-Cola Iberian Partners, privately held and majority owned by Spain’s Daurella family, and German bottler Coca-Cola Erfrischungsgetraenke, which is currently part of the Coca-Cola Co.

Coca-Cola Enterprises would get shares in the new company as well as a cash payout of $14.50 per share, or $3.3 billion in aggregate, funded by the enlarged group taking on new debt. Coca-Cola European Partners would have a tax rate of 26 to 28 percent and be domiciled in London.

Coca-Cola Enterprises reported a 17.5 percent slide in revenue for the second quarter of 2015, driven by unfavourable currency movements and a 1 percent decline in volumes. The company is the sole bottler for Coke in the countries where it operates.

Shares in Coca-Cola Enterprises rose 2.8 percent by noon Eastern on Aug. 6, at $53.30, giving the company a market capitalization of $12.2 billion.