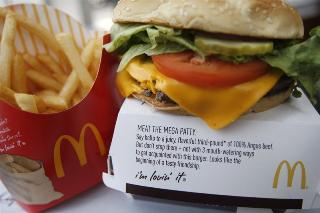 McDonald's product is pictured in a restaurant in Washington. The Global fast food operator on August 19 launched the first renminbi-denominated bond from a multinational corporate issuer.

Coca-Cola’s quarterly profit fell 14 percent after it reported three months of falling North American soda shipments on Oct. 21. The beverage group warned it was likely to miss its long-term earnings growth target this year. It also said it would accelerate its cost-cutting program. Its shares fell more than 6 percent soon after 10 a.m. in New York.

McDonald’s reported net profit down 30 percent in the third quarter from a year earlier, with sales at stores open for more than a year lower by 3.3 percent. Comparable sales in its Asia-Pacific, Middle East and Africa business fell nearly 10 percent after the company became embroiled in a China food safety scandal. Soon after 10 a.m. in New York, McDonald’s shares were trading down slightly while the S&P 500 Index was up around 1 percent.