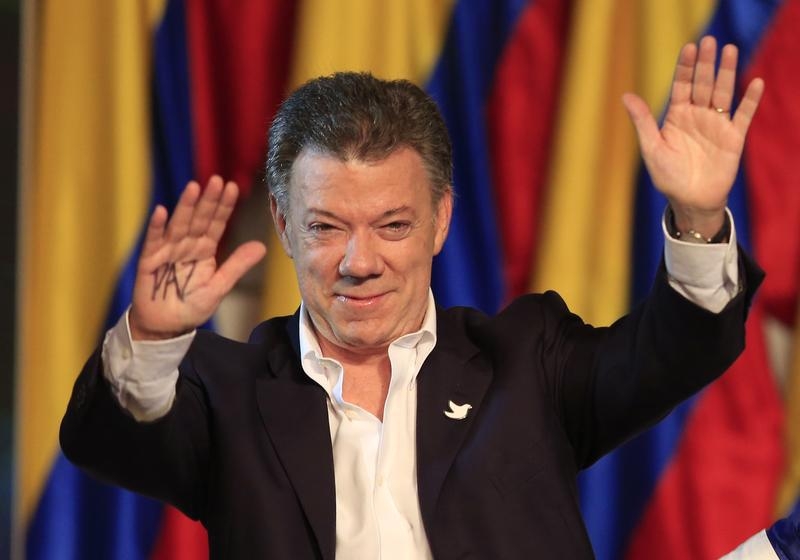 Colombian presidential candidate and President Juan Manuel Santos celebrates after winning a second term in the country's presidential elections in Bogota June 15, 2014. Santos won a second term on Sunday with an election victory that allows him to continue peace talks with Marxist guerrillas to end a half-century war. Santos beat right-wing challenger Oscar Ivan Zuluaga with about 50.9 percent support after a bitter campaign that challenged voters to decide between the incumbent's pursuit of negotiated peace or a likely escalation of combat under his rival. The word "Peace" is written on Santos' right hand. REUTERS/Jose Miguel Gomez

Colombian President Juan Manuel Santos will be inaugurated for a second four-year term on Aug. 7.

The Latin American nation’s central bank raised its policy rate by 0.25 percentage point to 4.25 percent on Aug. 1, the fourth such rise in recent months. It also forecast economic growth of between 3.5 percent and 6 percent in 2015 with inflation at 3 percent, after 4.7 percent estimated growth in 2014. Colombia’s consumer price inflation in the year to July 2014 ran at 2.9 percent.

Moody’s Investors Service on July 28 raised Colombia’s credit rating to Baa2, the highest in its history.