Sprint to the courthouse 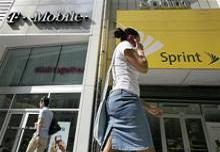 A rival could help trustbusters squelch the $45 bln purchase of Time Warner Cable, just as the U.S. telco undercut AT&T’s bid for T-Mobile US. Showing harm to content sellers, not just customers, may be the key. There are no volunteers yet, but regulators seem open to persuasion.

A woman talks on her phone as she walks past T-mobile and Sprint wireless stores in New York July 30 2009. REUTERS/Brendan McDermid

The currently largest operator has offered to sell approximately 3 million of Time Warner Cable’s 11 million video subscribers to keep its share of the overall market to about 30 percent in an effort to appease regulators. It has also said it will extend the conditions agreed in its 2011 takeover of NBC Universal, including a commitment not to deny access to its customers by television and film producers that compete with NBC.