My word is my bond? 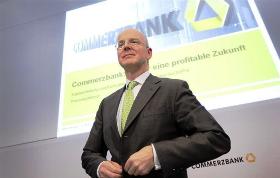 The Commerzbank bonus trial is a throwback to a greedier era. Just as the furore over bankers’ pay reaches its annual climax, an English judge is set to hear 104 bankers’ claims that they are entitled to around 50 million euros of unpaid bonuses for 2008 – the same year their German employer lost over 6 billion euros. The case may smack of hubris. But even if the bankers win, new pay regulation makes future claims much harder.

The bankers’ case is stronger than it first appears. It centres on a 400 million euro “guaranteed minimum bonus retention pool” unveiled to investment bankers at Dresdner Kleinwort in August 2008 as rumours swirled that Allianz, the German insurer, was about to offload its parent.

Commerzbank, which subsequently bought Dresdner, contends the guaranteed pool was nothing of the sort. It cut most investment bank bonuses by 90 percent shortly after its takeover was finalised in Jan. 2009. Commerzbank’s decision is understandable: Dresdner had suffered hefty losses. However, the German lender’s defence is less that the awards were undeserved than that bonuses are, by definition, discretionary.

English law is not so clear cut. Case law has established that employers’ bonus discretion is not absolute. The bankers also have an unlikely ally in Britain’s Financial Services Authority, which had put Dresdner Kleinwort on its watchlist in May 2008. The watchdog was worried that uncertainty about the bank’s future could lead to key individuals leaving or becoming disaffected. In 2009, three senior ex-Dresdner Kleinwort bankers won their claim for 11 million euros in guaranteed bonuses and severance payments.

But even if the judge finds these arguments persuasive, banks are unlikely to face such cases in future. The FSA now tends to frown on bonus guarantees. Moreover, the watchdog insists that pay is more closely linked to long-term performance. That means a proportion of bonuses are deferred, and banks have the explicit power to claw back payments in the event of losses or poor risk management. The ex-Dresdner bankers may be the last of a greedy breed.

Martin Blessing, CEO of Germany's Commerzbank buttons-up his jacket after a news conference in Frankfurt, April 6, 2011.

The High Court in London will on Jan. 25 begin hearing a case brought by 104 bankers who had been employed by Dresdner Kleinwort, the investment banking arm of Dresdner Bank, during 2008.
The bankers claim that they are due around 50 million euros from a 400 million euro “guaranteed retention pool” unveiled by the bank in August 2008.
Commerzbank, which acquired Dresdner from Allianz, the German insurer, at the end of August 2008, is disputing the bankers’ claims. It reduced almost all of the “provisional” bonuses that bankers were awarded in December 2008 by 90 percent after it completed the Dresdner acquisition on Jan. 12, 2009. Dresdner made a loss of 6.4 billion euros in 2008.
Stefan Jentzsch, the former chief executive of Dresdner Kleinwort. will testify for the claimants on Feb. 6 and 7. Five witnesses, including Commerzbank chief executive, Martin Blessing, will speak for the defence.
Three senior Dresdner Kleinwort bankers were awarded almost 11 million euros between them in guaranteed bonuses and severance payments in the High Court in October 2009. Dresdner had asked the men to give up their bonuses voluntarily. However, there was no provision to force the men to do so in the case of large losses.
Twenty one of the bankers are being represented by Mishcon de Reya, while Stewarts Law is advising the remaining, mainly less senior, staff. Linklaters is acting for Commerzbank.