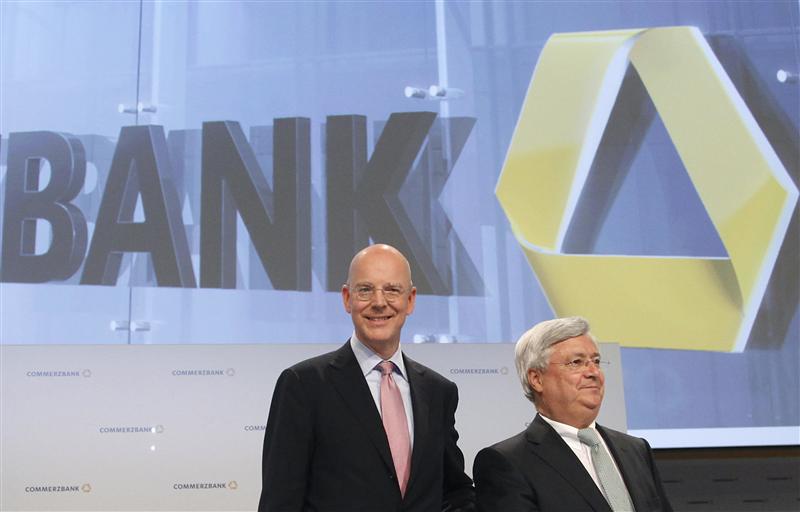 The German lender warns profit in the second half will lag behind an already tough first half. But it also confirms a speeding-up of its plans to bolster its capital base. With the euro zone crisis far from over, even laggards in stronger economies don’t want to be outliers.

Martin Blessing (L), CEO of Germany's Commerzbank and board chairman Klaus-Peter Mueller arrive for the bank's annual shareholder meeting in Frankfurt in May

Commerzbank announced on Aug. 9 that group profit in the second half of 2012 would lag behind the performance in the six months to June 30. The German lender blamed an anticipated subdued earnings performance, increased loan loss provisions and a likely growth in costs.
Commerz reiterated plans unveiled at the end of June to step up focus on its profitable core business, putting all its commercial real estate, ship financing and public finance business into its no-core portfolio. It blamed high regulatory capital and liquidity requirements associated with new Basel III requirements, as well as future strong cyclical fluctuations in results.
The bank does not expect the challenging condition in the economy and the capital market to stabilise, it said.
Commerzbank announced pre-tax profit for the six months to June 30 of 906 million euros, down 24 percent from the first half of 2011.
The German lender’s first half revenue was 5.2 billion euros, down 14 percent year-on-year, due to decreased interest rates and subdued client activity. Its loan loss provisions were 616 million euros, up 3 percent year-on-year.
Commerz’s core Tier 1 ratio is now 12.2 percent. However, on a fully-loaded Basel III basis it expects to be at 7.7 percent by the beginning of 2013.
At 1030 GMT, Commerzbank shares were trading at 1.2 euros, down 4.1 percent.