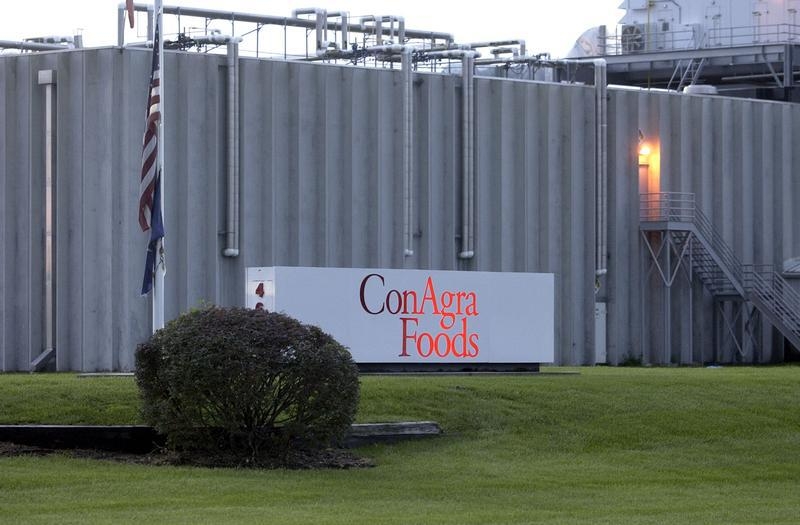 ConAgra’s carve-up gives activists just a slice of the action. The $17 billion food giant is separating frozen fries from Chef Boyardee and Slim Jim. It’s the second big move for fast-acting Chief Executive Sean Connolly, who joined in April and was followed into ConAgra by pushy investor Jana. Spinning rather than selling, however, demands more patience.

An outright sale of potatoes and appetizers, which will be rebranded Lamb Weston, might have raised a good slug of cash. Credit Suisse reckons the business could have fetched as much as $6 billion. There would have been a tax hit, of course, unless some fancy finance, such as a reverse Morris Trust, was used. Even so, ConAgra has a tax break of more than $1 billion from previous losses that it could use to soften the blow.

That kind of money would have helped pay down further the company’s debt load of $5 billion debt, which amounts to some two-and-a-half times estimated EBITDA, according to Thomson Reuters data. The $2.7 billion sale of its private-label business to TreeHouse will be helping on that front, too.

ConAgra is still mopping up from that abysmal $5 billion acquisition of RalCorp in 2013 – and Connolly is still trying to kick the shares into gear. Selling taters might have given them a bigger jolt than the 4 percent increase Wednesday’s news provided. They’re up 13 percent since the former Hillshire Brands boss was announced as the new ConAgra CEO in February against a flat S&P 500 Index.

Separating the business does nevertheless send a strong signal of Connolly’s intentions to refashion ConAgra, which will be renamed Conagra Brands after the split. That includes appointing two of Jana’s suggestions for directors to the board and unveiling a $300 million cost-cutting program. And there’s always the chance a rival may yet decide to make a bid for Lamb Weston. ConAgra does, after all, expect the spin to take a year to complete.

Either way, Connolly is making the right moves. Jana, and any other activists, may just have to wait longer for the financial feast than they expected.

ConAgra Foods said on Nov. 18 it would spin off its commercial frozen-fries business, which will operate under the Lamb Weston name. The division generated revenue of some $2.9 billion in the financial year that ended in September.

ConAgra Foods said on Nov. 18 it would spin off its commercial frozen-fries business, which will operate under the Lamb Weston name. The division generated revenue of some $2.9 billion in the financial year that ended in September.