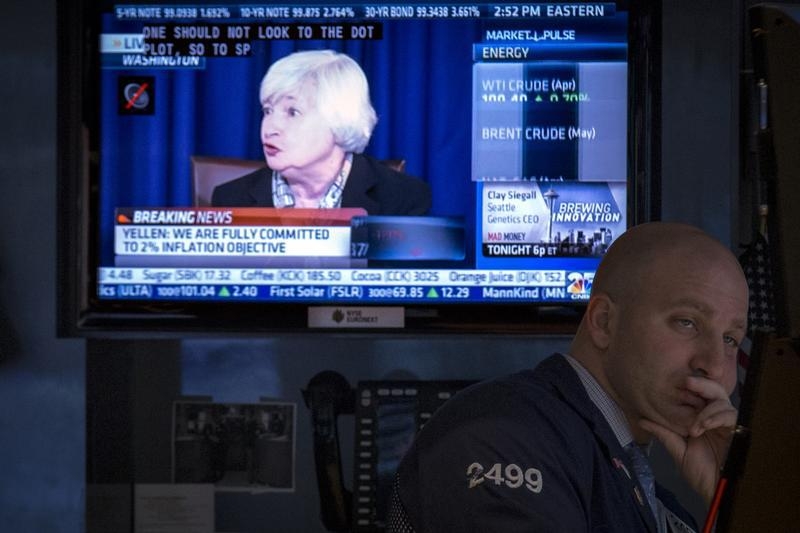 A confused U.S. Federal Reserve has added to the muddle in emerging markets.

At their meeting that ended on March 19, the nine voting members of the Federal Open Market Committee (FOMC) wriggled out of a previous commitment to start increasing interest rates after unemployment had fallen to 6.5 percent. To assure markets that overnight rates will stay at near-zero levels, the committee promised instead to seek maximum employment and 2 percent inflation.

The accompanying Economic Projections document, though, poured cold water on this dovish, if somewhat vague, statement. In it, FOMC members – both voting and non-voting – bumped up their expectation of future interest rates. The committee’s median expectation for the target overnight rate at the end of 2016 is now 2.25 percent, up half a percentage point from its previous estimate, according to Barclays. The hawkish projections caused a selloff in U.S. Treasury bonds. Asian equities and currencies followed suit.

If investors once again start to doubt the U.S. central bank’s commitment to allow inflation to reach 2 percent before it raises rates, there will be a fresh bout of fund-raising pain for countries like Brazil, India and Indonesia whose current accounts are in deficit. Heightened uncertainty about the timing of U.S. rate increases could also make global markets more volatile, further slowing down investment.

Moreover, developed nations are facing bigger worries than they were last year. Signs of credit stress and an economic slowdown in China are growing, as shown by the weakening renminbi. The diplomatic standoff in Ukraine is a further headache. The Fed’s policymakers, who are as much in the dark as anybody else about how soon dormant inflationary pressures will re-emerge, are lighting a match to see where they want to take interest rates in 2016. That’s not a smart idea when investors are facing a mounting haystack of risks.

A screen displays a news conference by Federal Reserve Chair Janet Yellen as a trader works on the floor of the New York Stock Exchange March 19, 2014.

At their meeting that ended on March 19, members of the U.S. Federal Reserve Board and regional Federal Reserve Bank presidents bumped up their median forecast for the federal funds target rate at the end of 2016 to 2.25 percent, from 1.75 percent previously.

The nine voting members of the Federal Open Market Committee (FOMC) removed the 6.5 percent unemployment rate target for a possible increase in interest rates. The FOMC said that in determining how long to maintain the its current target range for interest rates of zero to 0.25 percent, it “will assess progress — both realized and expected — toward its objectives of maximum employment and 2 percent inflation.”

The yield on 2-year U.S. Treasuries rose 7 basis points to 0.42 percent after the FOMC announcement.

Among major emerging market currencies, the Indonesian rupiah was 0.7 percent lower against the U.S. dollar, while the Korean won fell 0.4 percent. Brokers quoted a 0.7 percent lower price for the Indian rupee in Singapore than yesterday’s onshore rate.

The Chinese yuan plunged to a one-year low against the dollar, falling to 6.2233, its lowest level since March 7, 2013. It was the second consecutive daily fall of more than 1 percent from the central bank’s midpoint.