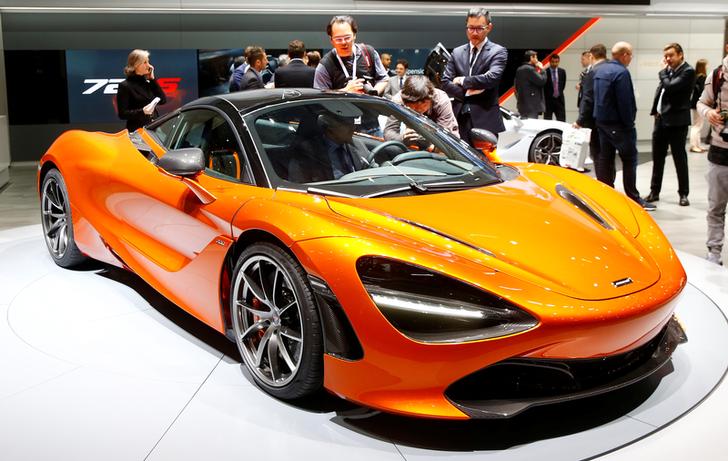 Out of road. Supercar maker McLaren is trying to find a SPAC-signposted escape route. The Surrey-based manufacturer, whose sales have been slammed by the pandemic, told the Financial Times it was in talks to raise up to 500 million pounds in fresh equity, potentially through a special purpose acquisition company. That would come on top of a 300 million pound capital injection earlier this year by existing investors, including Bahrain’s sovereign wealth fund.

Given investors’ thirst for SPACs – the shares of Paris-listed 2MX Organic bounced 30% after it listed this week – that seems like a great idea. But pitching McLaren as a Ferrari-style luxury investment may be tricky: its revenue has fallen 61% and it generated negative EBITDA in the year to September, making it more akin to high-octane jalopy Aston Martin Lagonda. Even for the freewheeling world of SPACs, McLaren may be a bumpy ride. (By Christopher Thompson)

Made up. Investors like meal-kit deliverer HelloFresh, but they would prefer a hot dinner given the choice. The Berlin-based group’s market value rose 10% to almost 10 billion euros on Thursday, after it said revenue would grow by 20%-25% in 2021, excluding currency fluctuations. Chief Executive Dominik Richter expects customers to keep ordering make-at-home recipe kits even after lockdowns, which have helped sales to double this year.

Even after Thursday’s surge, though, HelloFresh trades at a discount to companies that focus on restaurant-prepared meals. After adjusting for net cash, Richter’s group is valued at 2 times the revenue analysts expect it to generate in 2022, compared with 4 times on average for Delivery Hero and Just Eat Takeaway.com. They’ll grow faster than HelloFresh over the next three years, analysts reckon, implying that diners will put a premium on convenience. Investors are apt to do the same. (By Liam Proud)

WFH 4-EVER. Getting Americans back into the office might be a slog. Almost 90% of U.S. workers who can fulfil their duties from home would rather continue logging in remotely at least some of the time even after they can safely return, a recent Pew Research Center study shows. And over half say they would prefer teleworking all, or a majority, of the time. And despite anecdotal complaints about “Zoom fatigue,” over 60% of workers who use videoconferencing frequently report being fine with it, providing yet more good news for the $110 billion video-communication platform.

It’s obviously bad news for commercial real estate. Claims that more space would be needed for social distancing seem less convincing with positive vaccine news. And a big player like $3.7 billion Cushman & Wakefield has seen its share price decline by almost a fifth. 2020 may have been rough for this industry, but the post-pandemic reality could get uglier. (By Anna Szymanski)

Up and down. The Agnelli family is swimming against the luxury M&A tide. While LVMH and Moncler have scooped up Western brands in the pandemic, family scion John Elkann is looking east. Holding company Exor, best known for its investments in carmakers Fiat Chrysler Automobiles and Ferrari, said on Wednesday that it will invest 80 million euros in Chinese high-end brand Shang Xia. Exor will replace French heavyweight Hermès International as the company’s largest shareholder, although the Birkin bag maker and founder Jiang Qiong Er will stay as investors.

It’s a good way for Exor to diversify while deploying some of its cash. Chinese shoppers have been the motor of the luxury industry’s growth, despite being grounded by the pandemic. Buying into a mainland brand gives Exor a foothold at the heart of the future of fashion. Yet, despite spending 10 years under Hermès’ wing, Shang Xia has yet to break even, Jiang said in June. Challenging Western brands’ dominance may take time. (By Lisa Jucca)

Grocery grumble. The pandemic-fuelled craze for online groceries may be running out of steam. Ocado’s latest trading update shows that the UK e-commerce group’s sales in the 13 weeks to the end of November were up 35% versus the same period last year. That’s still impressive, but less than the 52% year-on-year growth Ocado’s brightly coloured vans delivered in September. The company’s shares dropped 5% on Thursday morning, though they’re still up more than 70% this year.

Investors are assuming Ocado will hold on to most of its new customers. Yet as Britain and other countries roll out vaccines, demand for bulky grocery orders may dip. That would make Chief Executive Tim Steiner’s decision to expand capacity by 40% next year look excessive. And although Ocado’s financial prospects depend mainly on its ability to sell its warehouse technology to international retailers, a slowdown might make these customers reconsider how many expensive sheds they need. (By Aimee Donnellan)

Stocking stuffer. Hong Kong kick-started another round of restrictions to fend off a fourth wave of Covid-19. The rules are provisionally set to be lifted on Dec. 23, in time for the festive season. Everything from gyms to karaoke bars is being shuttered, and fines for those who break the regulations on group gatherings more than doubled to HK$5,000 ($645).

The measures will be hard on local companies and consumers. Retail sales already tumbled 27% through October. It is a reminder that even in places such as Hong Kong that have managed the virus relatively well, the risk of a resurgence always looms.

Maybe this round of pain will be short-term and worthwhile. With Christmas, New Year’s and February’s Lunar New Year on the horizon, Chief Executive Carrie Lam may be able to get a nascent economic recovery back on track and, for once, avoid being the Grinch. (By Katrina Hamlin)

A McLaren 720S car is seen during the 87th International Motor Show at Palexpo in Geneva, Switzerland March 8, 2017.