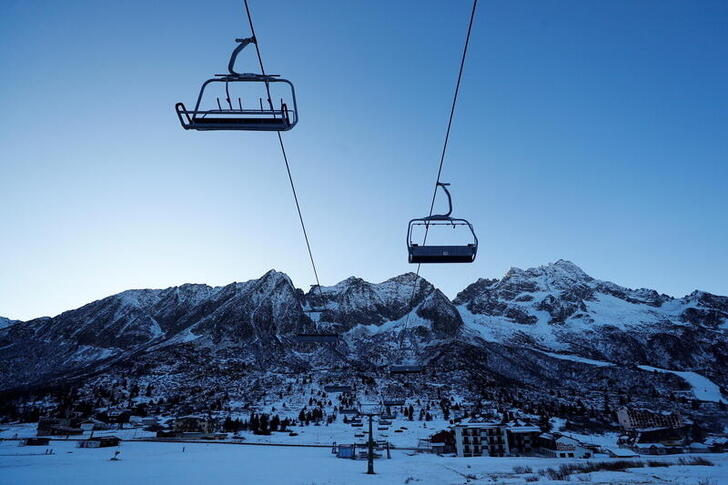 Toboggan thy neighbour. Europe is getting over its skis in trying to find a common solution for the upcoming Christmas winter sports season. Germany and France want to keep all resorts closed over the period. But Alpine nation Austria, which makes 40 billion euros a year in tourism revenue, chiefly from winter sports, is dragging its feet. Non-European Union Switzerland has already opened several winter resorts, albeit with distancing and restrictions to after-skiing gatherings. Italy, which had mulled reopening slopes even as most schools are closed, is now rolling back, but also wants a level playing field.

Closing all the slopes would be costly: Austria wants EU compensation for 2 billion euros of expected losses. But allowing people to squeeze into cable cars and enjoy apres-ski may pile pressure on national health systems as Europe fights a second wave of Covid-19. Without a coordinated and strict EU approach, a post-Christmas virus resurgence could be on the cards. (By Lisa Jucca)

Wishful thinking. Italy’s Credito Valtellinese (Creval) hopes to squeeze a higher bid from suitor Credit Agricole. The mid-sized lender is hiring advisers to assess the French group’s “unexpected and unsolicited” 737 million euro cash offer. Investor Petrus Advisers believes Creval is worth at least 14 euros a share, 60% of its tangible book and a third more than Credit Agricole’s offer, according to a letter seen by Breakingviews. That looks rich for a bank that eked out a 2% return on equity last year.

French boss Philippe Brassac can pay more, but needn’t dig too deep. With the pandemic raging, only local heavyweights Intesa Sanpaolo and UniCredit could make a higher cash offer. But the former is busy with its recent UBI Banca takeover, and the latter is under government pressure to buy troubled Banca Monte dei Paschi di Siena. Smaller rivals like Banco BPM or Credito Emiliano could only make all-share bids, which would be less appealing. Investors shouldn’t bet on a bidding war. (By Lisa Jucca)

Fill in the Blanc. Amanda Blanc has scope to over-deliver on dividends. The new chief executive of Aviva said on Thursday that she expects to pay a 21 pence dividend for the full year, a third less than investors received before the coronavirus pandemic. The move comes after regulators forced insurers across Europe to curb payouts to conserve capital.

Investors may still benefit from Blanc’s plans to slim down the business. The boss of the 13 billion pound insurer is considering exiting continental Europe and Asia to focus on the United Kingdom, Ireland and Canada. The dividend would be 1.25 times covered by these core units, Credit Suisse analysts calculate. Blanc may then have even more cash to splurge. She plans to pay out excess capital when the company’s solvency ratio is over 180%. It was 195% in the three months ending Sept. 30. Once the worst of the pandemic is over, she can be more generous. (By Aimee Donnellan)

Flying blind. Philippine Airlines may be out of runway. The country’s finance minister said on Wednesday that the company is planning to seek court protection from creditors. Its $1.8 billion parent, PAL, partly owned by Japan’s ANA, insists no decision has been taken. Details are trickling out, though. The Nikkei reports that Philippine Airlines is looking to raise $505 million through its top shareholder, tycoon Lucio Tan, and private and government banks to provide post-restructuring liquidity.

Expect to see more trouble beyond just southeast Asia. Airlines around the world have been kept on life support during the pandemic, with states extending $173 billion through loans and loan guarantees, wage subsidies and more, according to the International Air Transport Association. The trade group warns that carriers could run out of money before they benefit from any vaccine-led recovery. The median airline’s cash might only last around eight months longer. (By Una Galani)

Debts are the bigger headache. Much of the sector was already three sheets to the wind before Covid-19, due to previous borrowing binges. Now leverage has gone from tipsy to intoxicated: Fuller’s net debt is nearly 4 times projected EBITDA in its next financial year, according to Refinitiv data. At M&B that metric swells to almost 5 times, prompting the owner of All Bar One to flag material uncertainty about its status as a “going concern”. Even so, M&B has axed just 3% of its workforce in anticipation of a strong rebound in 2021. Fuller parted company with a fifth of its employees. The post-vaccine party can’t come soon enough. (By Christopher Thompson)

A closed chairlift is seen at the ski resort of Passo Tonale in the Dolomites which has become a virtual ghost town after the government decision to close everything down in fear of the rising numbers of coronavirus (COVID-19) infections, in Passo del Tonale, Italy, November 26, 2020.