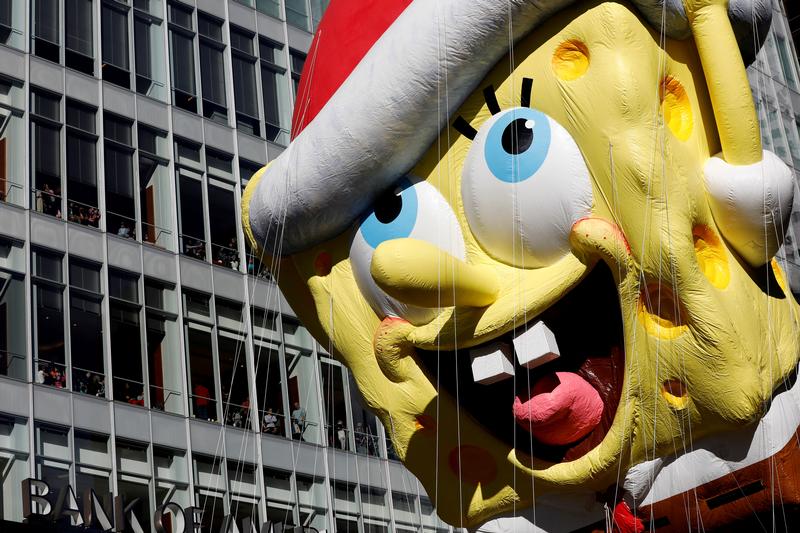 Slow clap. AMC Entertainment is barreling ahead with plans to open its movie theaters in the United States on July 15. Weirdly, boss Adam Aron was nonchalant about customers wearing face coverings until an intense backlash prompted him to reverse course. Guests are now required to don masks nationwide. Yet it may not matter, because cinemas’ glory days are almost certainly past.

Just look at the new releases. True, Walt Disney and Warner Bros are releasing two tent-pole films, “Mulan” and “Tenet,” through cinemas. But others aren’t. ViacomCBS said on Monday that “The SpongeBob Movie: Sponge on the Run” will be distributed in early 2021 on demand and then exclusively through its streaming service CBS All Access. A combination of changing habits and media groups with new digital platforms to promote may play a bigger factor in AMC’s plans than whether or not the guy in the next seat wears a mask. (By Jennifer Saba)

Strings attached. Struggling acrobatics troupe Cirque du Soleil may be getting a lifeline from the Quebec government. The Canadian province, where the high-flying act is based, is prepared to lend $200 million to get Cirque back in motion, Bloomberg reports. But Economy Minister Pierre Fitzgibbon, who spent part of his career before politics as an investment banker and finance chief at National Bank of Canada, is making potential recipients work for the money.

It will only be available after Cirque backflips out of its debt restructuring. Fitzgibbon has so far only offered the cash to Cirque’s current shareholders – TPG, Fosun International and Caisse de dépôt et placement du Québec – so they’d need to secure control from creditors, some of whom already made an offer for Cirque. And to avoid what he called Cirque’s “disaster of a capital structure,” the province’s debt would have to be Cirque’s only debt. Those are some understandable restraints. (By Antony Currie)

Polish sparkle. Private equity firms Cinven, Permira and Mid Europa Partners are planning an initial public offering of Poland’s biggest e-commerce website, Allegro, Bloomberg reported late on Monday. The enterprise value at the time of their investment just three years ago was $3.25 billion. It’s expected to be valued at $11 billion in a listing after the summer, Bloomberg reported without specifying whether that included debt.

Online shopping has been a winner from coronavirus lockdowns and global players like Amazon.com have limited market share in Poland. As one of the few big European floats this year and the biggest after coffee group JDE Peet’s, there may well be pent-up investor demand. Still, the banks that are coordinating the deal will have to watch out for market volatility, either if there’s a big spike in virus infections or before the U.S. presidential election. Even a strong IPO candidate may have to price generously. (By Dasha Afanasieva)

Sunburned. Los Angeles Lakers’ star LeBron James may be facing his toughest opponent yet: Florida. National Basketball Association players are supposed to be hitting the courts in the state next month. But the Sunshine State now has over 100,000 confirmed Covid-19 cases – and recently posted record numbers of new daily cases.

True, the 22 teams are set to play in a bubble-like atmosphere with extensive health guidelines outlined in an 113-page document. But ESPN reported that players and executives have still expressed concerns.

And it’s not just the hoopsters. Major League Baseball – which, in theory, will play ball this year – closed spring training facilities in Florida and Arizona until they can be deemed safe, partly because five Philadelphia Phillies players stationed in Florida tested positive. It’s one more sign that the United States’ haphazard response to the coronavirus crisis could make getting back in the game a challenge. (By Anna Szymanski)

Angkor wut? It’s getting pricier to see Siem Reap. Even as some small countries try to help cover virus-related travel costs, Cambodia is asking visitors to put up a $3,000 deposit to pay for a Covid-19 test upon entry and any other potential treatments or fees. And to be extra sure, officials also want proof of $50,000 of health insurance. A cautious approach is understandable for a nation with only 129 reported coronavirus cases and no deaths.

Additional barriers to entry, though, could be problematic for a place where travel and tourism accounts for more than 26% of GDP. Few insurance policies cover a known pandemic. Returning home to most countries often requires a 14-day quarantine. The comparative advantage of open borders also could disappear quickly. Some well-heeled travelers may be itchy to get to the renowned Angkor Wat temple complex, but Cambodia’s solution hardly seems like a passport to recovery. (By Jamie Lo)

Hit the brakes. So much for automakers’ hopes for a V-shaped recovery. Sales by the likes of Volkswagen, Peugeot and Fiat Chrysler Automobiles are expected to decline by a quarter in 2020 compared with last year, according to a new forecast on Tuesday from the European Automobile Manufacturers’ Association.

The gloom contrasts with some analysts’ hopes that social distancing might actually be a positive, by making workers drive rather than use public transport. The estimate, equivalent to 3.2 million fewer European vehicle registrations than 2019, implies only a gradual uptick from a 41.5% year-to-date decline. The ACEA wants government help to bolster an industry that accounts for 11% of EU manufacturing jobs. The omens aren’t promising. Buyer incentives have so far focused on niche electric vehicles – less than one in 10 of the new wheels on the roads. (By Christopher Thompson)

Car chase. By contrast, used car sales may be getting a viral turbocharge. At least that’s the pitch from online selling platform Cazoo, which is now worth $1 billion. The latest brainchild of Alex Chesterman, creator of Lovefilm and online property platform Zoopla, managed to convince investor Draper Esprit and others to inject another 25 million pounds on Tuesday, taking its total fundraising to 200 million pounds.

Investors have little way of knowing if they’ve bought a dud. The company launched just six months ago and so can’t even present a full set of accounts. Last week its finance director said Cazoo had generated 40 million pounds of sales since it hit the tarmac. If it maintained that pace throughout the year, its touted valuation would be roughly 10 times sales, way more than established U.S. rival Carvana’s six times. At least somebody trusts second-hand car salesmen. (By Aimee Donnellan)

(This item has been corrected to reflect the fact that while Cirque du Soleil is restructuring its balance sheet, it is not doing so in bankruptcy.)