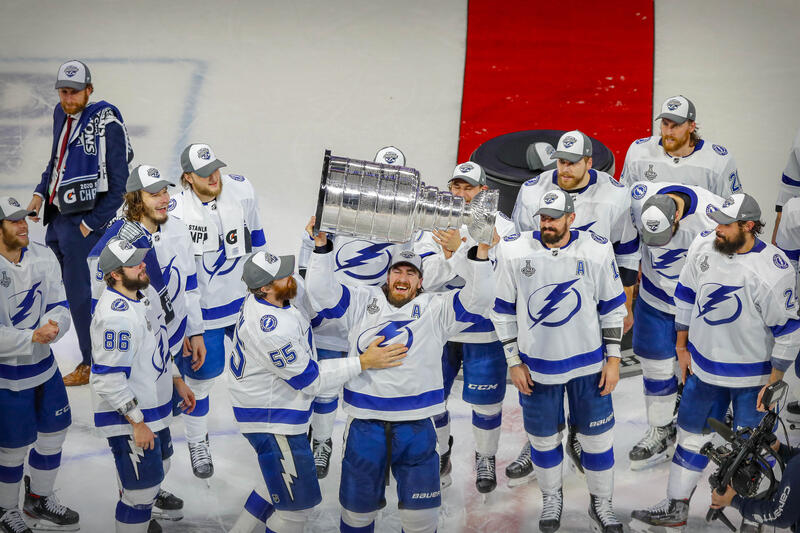 Bubble wrap. It wasn’t just the Tampa Bay Lightning declaring victory on Monday after the team won the National Hockey League’s Stanley Cup. The organizer’s strategy of isolating teams also proved a big success. The NHL chose two Canadian cities for their games – Toronto and Edmonton – and conducted over 31,000 coronavirus tests for those involved in the production. No positive cases were reported among players, coaches and staff in these bubbles, according to ESPN.

The National Basketball Association’s similarly sealed-off play in Florida has also kept positive-test rates low. These forced experiments may have even boosted performance. The quality of hoopsters’ dribbling and dunking has been getting top marks from the sports press. Less travel – and more sleep – may be helping. Some general managers told ESPN this may alter how schedules are formed in the future, with teams playing multiple games per trip. Like investment bankers, athletes may enjoy one long-term side effect of the forced confinement: fewer flights. (By Anna Szymanski)

Revenge served cold. Investors for some of America’s truckers, teachers and subway workers aren’t happy about the money Allianz has lost them following the market meltdown caused by Covid-19. The pension fund for New York’s Metropolitan Transportation Authority is one of several that have launched lawsuits recently alleging the German money manager’s inability to properly protect their assets cost them all a total of around $4 billion.

That’s on top of broader problems the pandemic has wrought. Ridership on Big Apple subways plummeted so much that the MTA is facing an eye-popping $16 billion hole through 2024. Allianz told Reuters that the investment “losses were disappointing.” But it refuted the legal claims, calling them “flawed.”

Clawing back losses through the U.S. court system isn’t easy. Bear Stearns settled for just $225 million in 2012 after investors lost more than $18 billion of market value in the 2008 meltdown. Allianz’s suit is different, but their investors might find they recoup a pittance, too. Keeping their wallets closed next time Allianz comes knocking, however, could be their best revenge. (By Lauren Silva Laughlin)

Real costs. Turkish Finance Minister Berat Albayrak on Tuesday predicted the economy would expand 0.3% this year despite the pandemic. The V-shaped recovery that he expects appears at odds with his admission that tourism – which represents some 12% of the economy – and some other sectors have not yet bounced back as much as hoped.

Conspicuously missing from Albayrak’s presentation was the exchange-rate assumptions that underpin his new plan. The central bank last week hiked the benchmark rate by 2 percentage points in response to stubbornly high inflation. But the cost of borrowing is still below inflation. The rate rise therefore failed to prevent the lira from falling to new record low of 7.8 against the dollar on Tuesday. That makes the estimated $10 billion of foreign currency debt repayments that the private sector is due to make in the next two months more onerous. Companies risk becoming collateral damage of Ankara’s economic policies. (By Dasha Afanasieva)

Full bar. Lockdowns may have sparked bar and restaurant closures, but that hasn’t stopped two Nordic drinks makers from embarking on a cross-border, 560 million euro tie-up. Finland’s 300 million euro Altia, which makes the Aquavit spirit, is acquiring Norwegian rival Arcus in an all-share deal that values the latter at 260 million euros. The Finnish group’s shareholders get 53.5% of the enlarged company, against the 55% that undisturbed share prices would imply. However, an 18 million euro transfer of value to Arcus is more than offset by a 22 million euro dividend to be paid to Altia investors.

The Finns’ slight upper hand is partly down to location. Arcus’s Norwegian domicile means its shares are more vulnerable to swings in global oil prices, which have been acute in the pandemic. Finland’s euro zone membership arguably makes the acquirer’s shares more stable. Both sets of investors will win if greater size gives the new entity more heft in price negotiations with Nordic retailers. (By Aimee Donnellan)

Chasing targets. Chinese officials scrapped their annual GDP target this year as the pandemic froze economic activity, winning applause from those who blame such top-down guidance for encouraging industrial overcapacity and bad debt. Those critics will be disappointed to hear Beijing’s draft blueprint for 2021-25 will likely include a five-year growth target. Policy sources told Reuters that they recommended aiming for annual output to increase by somewhere around 5%-6% in the next five years. That implies a continued reliance on investment.

China can expect a decent economic rebound in 2021, but economic anxiety is warranted. While the pandemic appears under control, the recovery has been unbalanced and many long-standing issues have not been resolved. The macro leverage for the real economy has risen to 266% since the deleveraging campaign was put on hold in 2019. Even at 5%, Beijing will need to find a way to get more bang for the buck. (By Yawen Chen)

Plumb job. Activist Nelson Peltz has scored an unlikely pandemic winner with London-listed Ferguson. Shares in the U.S.-focused plumbing-parts supplier rose 6% on Tuesday after it reinstated shareholder payouts following resilient annual results. The 208.2 cents per share dividend announced by Chief Executive Kevin Murphy is the same as last year’s total and makes up for an interim dividend frozen during the lockdown.

Ferguson has now risen 71% since Peltz revealed a 5% stake in June 2019. Over that time, the benchmark FTSE 100 index is up just 7%. Moving the primary listing to New York could provide a further boost: Ferguson trades at 22.8 times estimated 2021 earnings, compared to U.S. rival Home Depot’s 24 times. First, however, it must demerge the UK business, which made a paltry $8 million of operating profit. Given the UK’s bleak economic outlook, Murphy has reason to remove the blockage sooner rather than later. (By Christopher Thompson)

Good news. Giving stuff away for free is rarely a recipe for commercial success. It’s paying off for Sweden’s most prestigious daily newspaper, though. At choice moments in the coronavirus saga, Dagens Nyheter, the equivalent of The Times in the United Kingdom or France’s Le Monde, removed paywalls to give non-subscribers access to news and hard-hitting editorials. Its output has taken the country’s government to task over its idiosyncratic approach to managing the crisis. Over time, nearly a third signed up to a full subscription, putting the title on course for its strongest financial performance in a generation.

Print and online advertising revenue has been plunging during the coronavirus – few companies want their products associated with a pandemic. Hence growing the online paying readership is crucial. Last month, the New York Times’ digital revenue overtook print for the first time. Dagens Nyheter, with help from an unprecedented public health crisis, may have provided another clue of how to get there. (By Ed Cropley)