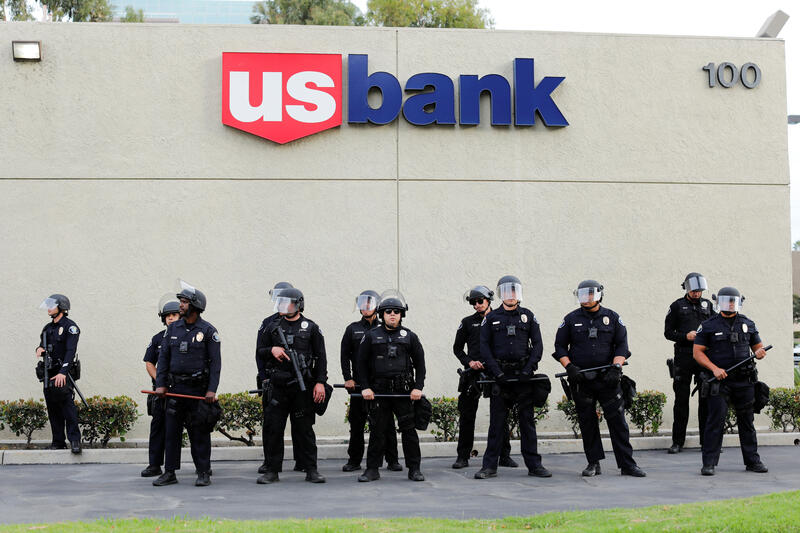 Scare tactics. America’s newest financial regulator wants the country’s mayors and governors to end Covid-19 lockdowns, and is using banks as a reason. On Monday, his second day as acting comptroller of the currency, Brian Brooks wrote a letter outlining the risk to financial stability.

Brooks’ concerns are old-school: bank robberies. Compulsory mask-wearing might encourage heists, he worries. While he doesn’t directly mention current unrest, he frets that buildings that banks lend against could be looted or vandalized. Brooks also worries cities’ “initiatives” to cut off utilities to lockdown-breakers could impact loan values.

It’s not a surprise that Brooks supports the White House philosophy on re-opening. Like predecessor Joseph Otting, he was a top executive at OneWest Bank, the bank U.S. Treasury Secretary Steve Mnuchin formerly co-owned. But it’s odd that his letter offers no evidence that lockdowns and masks cause crime. Brooks also argued banks need “sound data.” So do regulators. (By Antony Currie)

He’d only have to pay a fraction of what Ant put on the table. Rising competition as technology improves and regulatory issues including violating money-laundering rules had already whacked MoneyGram’s valuation. But the pandemic sent the stock down to barely 7% of its 2017 high as many of the customers who use its stores to send money within and without the United States either lost their job, couldn’t go out due to lockdowns, or both.

Shares were trading some 34% higher at 1 p.m. ET on Wednesday on the prospect of Western Union pouncing, That’d give MoneyGram shareholders some $215 million. They’d do well to pocket it. (By Robert Cyran)

Coal in a hole. President Donald Trump’s favorite fossil fuel is in the pits. The U.S. coal industry was already in the grip of a decades-long decline thanks to the rise of oil, then natural gas and, more recently, renewable energy. Last year the sedimentary rock powered some 23% of U.S. electricity needs, according to the Energy Information Administration, 13% lower than 2018 and just half of its 2010 level. Several operators went bankrupt, including Trump backer Robert Murray’s eponymous energy firm.

The coronavirus is accelerating the burn. Industry EBITDA could halve this year, Moody’s Investors Service reckons, as lockdowns reduce the demand for both thermal coal in electricity production and metallurgical coal for steelmaking. Environmental and business concerns have prompted many banks and investors to financially distance themselves. That’s good for air and water quality. But it’s bad for the industry’s 44,000 workers, and a president who in 2018 lauded coal as “indestructible stuff.” (By Antony Currie)

Minnow money. The People’s Bank of China is preparing to buy loans made directly to small firms by commercial banks to the tune of 400 billion yuan ($56.2 billion) per quarter. The aim is to inject around 1 trillion yuan into struggling private companies that ordinarily represent big risks to bank balance sheets, and which are also responsible for a majority of the country’s jobs. They have been hit hard by Covid-19, but this move reinforces suspicions that loan officers have been reluctant to fund these businesses, despite relentless pressure from the central government.

The rub is that anyone using the facility will need to pay it back in a year. The central bank also will not bear the risk if loans sour. This conservatism might sabotage the goal; China is unlikely to leap back to health so quickly, which means the money will go to smaller state-owned enterprises – or nowhere at all. (By Pete Sweeney)

Slot machines. Deutsche Lufthansa has come up with a partial answer to the question of how to value airport slots. Shares in the German carrier climbed as much as 8% on Tuesday, the first trading day after the European Commission watered down demands for it to surrender 72 take-off and landing openings in return for approval of a 9 billion euro state rescue. Instead, Lufthansa will only lose 24 slots at the Munich and Frankfurt hubs where it accounts for two-thirds of flights.

What looks like a mini-victory for Chief Executive Carsten Spohr is not necessarily a setback for European Union antitrust chief Margrethe Vestager. She was never going to get her opening gambit, but at least now has some measure of how much a slot might be worth. Based on the 350 million euros added to Lufthansa’s market capitalisation, the 48 slots it is keeping come out at 7 million euros a pop. (By Ed Cropley)

Parting gifts. Tesco’s clear-out of executives may come with a sting. Although the 22 billion pound grocer has enjoyed record sales during the coronavirus pandemic, its finance chief, Alan Stewart, is following in the footsteps of Chief Executive Dave Lewis, who will step down at the end of September. The duo deserve credit for steadying the ship after an accounting scandal in 2014. But a brewing pay row may sour relations with investors.

Tesco is stripping out online retailer Ocado from its peer group when calculating bonuses. The result will see Stewart pocket nearly 1 million pounds on top of his 750,000 pound salary and pension perks. Tesco’s defence is that Ocado, which also sells warehouse technology, is not really a grocer and is skewing the benchmark. This would be an easier argument to make if Ocado hadn’t also experienced a grocery boom since lockdown began. Investors will get a chance to have their say at the annual shareholder meeting on June 26. Tesco bosses may find their leaving presents are handed out reluctantly. (By Aimee Donnellan)

Law enforcement officers stand guard in front of a bank during a demonstration against the death in Minneapolis police custody of George Floyd, in Anaheim, California, U.S., June 1, 2020.