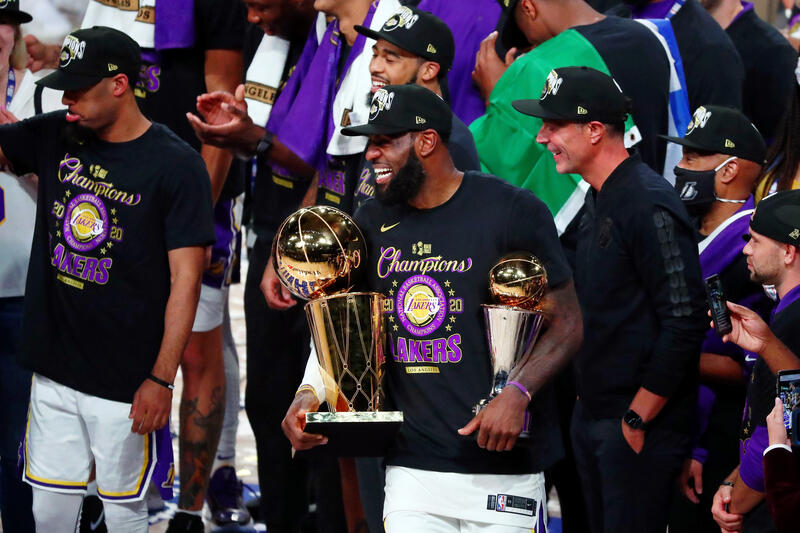 Air ball. LeBron James’s Los Angeles Lakers may be celebrating winning the National Basketball Association championship on Sunday – but the ratings for the finals offer little reason to cheer. This series posted some of the lowest-rated finals games ever, with declines of over 50% versus last year for certain games, according to Sports Media Watch.

It’s probably not an on-court issue. Ratings have been down for many recent events – including the Kentucky Derby horse race, the National Hockey League finals and early professional football games. Covid-19 delays scrambled traditional sports schedules, forcing more leagues to compete against each other for viewers. And in a year featuring a pandemic, economic ructions, calls for social justice and U.S. presidential elections, sports may just not be front of mind for many. So it’s no time to panic, but – with multi-billion-dollar broadcasting contracts on the line – leagues do need to regain momentum. (By Anna Szymanski)

Polish pop. Allegro, Poland’s biggest e-commerce company, is flying off the shelves. Shares of the online marketplace soared more than 50% in their Monday stock market debut, making the company worth almost $20 billion, including debt. The rise in popularity of online shopping due to the pandemic and lockdowns clearly gave Allegro a boost. After pricing at the top of the range, it was valued close to the more than 30 times adjusted EBITDA for the 12 months to June as Amazon.com.

Such a big first-day pop raises the question of whether the stock was sold too cheaply; after all, Allegro is growing sales faster than Amazon. On the other hand, private equity owners Cinven, Permira and Mid Europa will benefit from today’s rise when they unload their shares. And having bought at a nearly $3.3 billion price tag in 2017, the buyout barons were sitting pretty from the start. (By Dasha Afanasieva)

Green gold. Grocer supply chain scandals will squeeze supermarkets at both ends. The economic effects of the pandemic in Africa were laid bare in a weekend report about Kenyan security guards murdering people suspected of stealing avocados. The allegations, which are being investigated by Kukuzi, the company employing the guards, prompted Tesco, a buyer of its produce, to sever ties pending an investigation.

That’s likely to raise costs for Tesco. The 21 billion pound grocer is barely seeing the benefits of a near-7% rise in first-half sales as it was forced to take a 533 million pound hit from coronavirus-related charges. Investigating supply snafus will only erode the supermarket’s razor-thin operating margin, which is forecast to fall to 3.8% in 2021 from 4.6%, according to Refinitiv. Although costs are likely to rise for customers, pandemic-induced poverty and the sometimes murky supply chain to grocers could mean avocados are the first of many scandals. (By Aimee Donnellan)

Van life. Fancy camper vans were all rented out over China’s national holiday last week. The rage for recreational vehicles saw a shortage of rentals, Yicai Global reported. RVs are a relatively novel concept in the country. But with international travel off the agenda, and even long-range domestic travel discouraged in some cases, road trips gained appeal – and such vehicles are hygienically safer than planes, trains and hotels. The number of companies registering a luxury-caravan business rose by almost a fifth in the first six months of 2020, according to the article.

That is great news for Shanghai’s SAIC, one of the first big automakers to enter the market. Entrepreneurs are piling in, with some supplying complementary services like RV-friendly campsites. China had around 100,000 camper vans at the end of 2019. More than 9 million U.S. households own an RV. There’s room for everyone to grow. (By Katrina Hamlin)

Brutish Airways. The self-styled “world’s favourite airline” is trying to patch up relations with, well, pretty much everybody. After four turbulent years, British Airways Chief Executive Alex Cruz got the elbow on Monday from the new boss of parent International Airlines Group, Luis Gallego. Cruz’s departure should allow for a reset with UK politicians, making it easier to relax onerous quarantine rules on incoming passengers.

Snubbing a meeting with British Home Secretary Priti Patel in June won’t have helped Cruz’s fate. Although his frustrations at the country’s flights restrictions were justified, refusing to engage looks poor. Nor could Cruz fall back on a stellar track record. On his watch, a data breach cost BA $230 million in fines, while an IT glitch left tens of thousands of passengers stranded. Unions will also remember Cruz for his 13,000 coronavirus-related job cuts. A new pair of hands on the controls may help BA chart a smoother course. (By Ed Cropley)

Rent haul. KKR’s contrarian property bet is starting to pay off. Last month, the buyout giant bought a 5% stake in Great Portland Estates when the London office market was looking grim. The landlord’s shares had fallen 30% since the start of the year, and a fresh wave of infections was threatening to force more workers to work from home. But on Monday the company said it collected 87% of its rent from office tenants due for the month of October, a jump from 74% in June.

Great Portland Estates shares have risen 16% since KKR disclosed its stake. The private equity group may be hoping that even though 80% of London workers are still at home, companies will keep paying for unused space. Some are even expanding: in the quarter ending Sept. 30, GPE signed new leases worth 2.3 million pounds. The London office market is not dead yet. (By Aimee Donnellan)