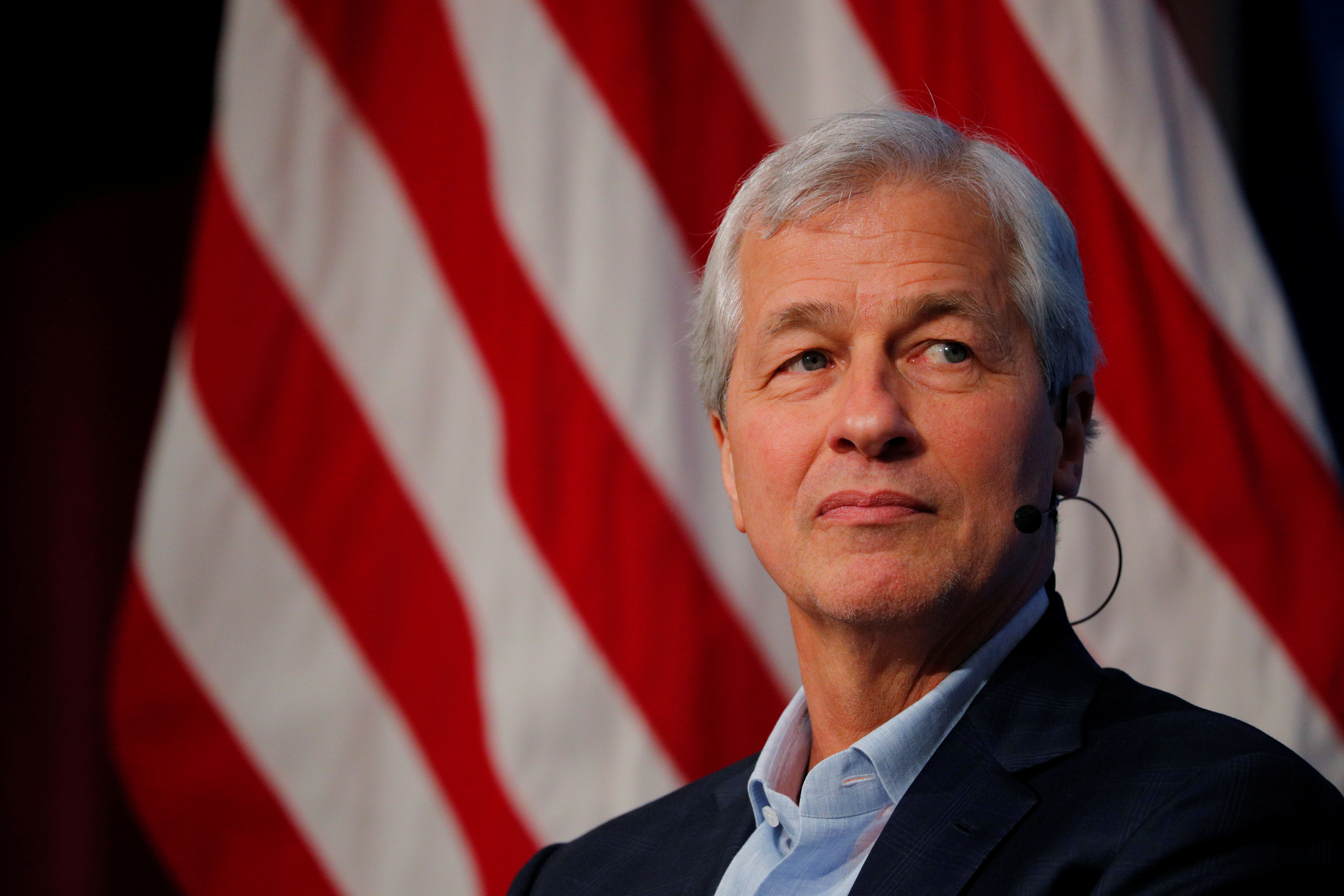 Over the wall. JPMorgan boss Jamie Dimon has joined the chorus of American business leaders calling for urgent Covid-19 stimulus. Walmart Chief Executive Doug McMillon also described fiscal support as “imperative.” While Republicans and Democrats bicker over whether it should be $500 billion, $2.2 trillion or some other number, Dimon’s advice is appealingly simple: “just split the baby and move on.”

He has a point. True, data on consumer spending and credit-card delinquencies remain encouraging, and progress on vaccines suggests a light at the end of the tunnel. But as Covid-19 cases rise and cities from New York to Chicago start to close up, it’s clear more help is needed in the interim. Federal Reserve chair Jay Powell has warned of a “downward spiral” otherwise.

So what’s the holdup? Dimon blames “childish behavior” by politicians. There’s more to it, of course, like dissent over where the money should go. Moreover, the last four years have laid bare that U.S. lawmakers aren’t given to baby-splitting. That suggests Dimon – who has repeatedly been named as a potential Treasury secretary – is probably better off staying where he is. (By John Foley)

Gen Z. Lockdowns are hard-wiring the online habits of the workforce of the future. That’s bad news for airlines, carmakers and even commercial real estate. According to Bank of America analysts, 40% of youngsters in the Generation Z post-Millennial demographic now prefer to hang out with friends online rather than in person. They’re also less enthusiastic about real-life experiences. That means softer demand for holiday air travel when movement restrictions ease.

Obvious winners are the environment, alongside e-commerce and social media giants like Amazon.com, Google and TikTok. BofA research says Zoomers may spend over 10 hours a day glued to their phones. Less evident beneficiaries are pet-care providers – a surge in dog and cat ownership under lockdowns points to animals replacing human interaction. Longer-term, it could be another nail in the coffin of the traditional workplace. When Zoomers leave (online) university, they may steer clear of anything that resembles an actual office. (By Ed Cropley)

The biggest news: Pfizer’s vaccine appears safe enough to apply for emergency approval within days. Pfizer plans to produce 50 million doses this year, and up to 1.3 billion in 2021. Until multiple rivals hit the market, Pfizer will sell what it can produce. At that point specifics become more important.

For example, vaccines often don’t work well in the elderly, so Pfizer’s over-94% effectiveness in adults over 65 could become a selling point. On the other hand, Pfizer’s jab needs ultra-cold refrigeration, while Moderna’s can be stored in a conventional freezer. Being first is enough today, but for next year, the angels are in the details. (By Robert Cyran)

Perfect timing. In 2017 U.S. retailer Target said it would spend more than $7 billion in a three-year plan to overhaul stores and kickstart its struggling digital business. The foresight has paid off as the pandemic has hastened changes in consumer behavior. On Wednesday, Target said that third-quarter e-commerce sales soared 155% year-over-year. Moreover, its physical stores – instead of acting as a brick weight – have become an asset: Same-day services that consist of in-store or curbside pickups as well as home delivery through its acquisition of Shipt, increased more than 200%. And some 95% of third-quarter sales were fulfilled by its stores. The $81 billion retailer’s strategy hit the bull’s-eye. (By Jennifer Saba)

Money for nothing. Europe can easily afford a fiscal binge, according to S&P. Economists at the rating firm reckon that every extra euro of government spending could boost output by as much as 2 euros over four years. The so-called fiscal multiplier is particularly high because of the euro zone’s economic malaise: fiscal stimuli have a bigger impact when unemployment is high and interest rates are stuck at, or below, zero.

European governments are already taking advantage of this opportunity. Germany, for example, has boosted spending by 8.3% of GDP. And the European Union has announced 1.3 trillion euros of support, including a 750 billion euro recovery fund. Yet governments are wary of bailout loans that carry stigma. And the recovery fund itself is in danger of being delayed. With the emergence of vaccines, and a possible end to the crisis, the risk is that the full benefit of a spending boost is missed. (By Neil Unmack)

Cyclical business. Halfords has done a good job of turning lockdown into lucre. The British auto-parts and cycle retailer faces a steeper climb converting that into long-term growth. A 7% jump in like-for-like revenue for May to October is more impressive than it looks, given that shops were shut for the early part of the period. However, with Brits hopping on to the saddle to avoid public transport or get fit, bicycle sales soared 54% and pre-tax profit doubled.

With a vaccine threatening a more normal 2021, the 550 million pound group is understandably cautious about the future. Yet there are reasons for optimism. Electronic bicycles, a massive untapped market, saw sales treble. And Halfords’ car-parts business fired on all cylinders as lockdowns eased. Furthermore, bike enthusiast and Prime Minister Boris Johnson wants more cycle paths as part of a green economic recovery. Halfords might yet avoid a cyclical downturn. (By Ed Cropley)

Nothing burger. Covid-19 is expected to accelerate healthy food trends, and Unilever doesn’t want to miss out. The consumer giant expects annual sales of plant-based meat and dairy alternatives to grow to 1 billion euros in five to seven years, the Financial Times reported. That’s a fivefold increase on this year’s estimate.

Annual growth of 26%-38% might sound like a lot, but it’s underwhelming as a proportion of the group’s 50 billion euros in yearly sales. It’s also undercooked compared to others’ high hopes for the switch from animal products. For example, analysts predict annual revenue growth of more than 50% for vegetarian innovator Beyond Meat in 2021-2022, according to Refinitiv. Unlike this showy upstart, 133 billion euro Unilever has an established global distribution network and products already undergoing the animal-free makeover. Its vegetarian and vegan ambitions deserve more bite. (By Dasha Afanasieva)

Smooth sailing. It’s full speed ahead for Sea. The Singapore-based video-games, e-commerce and digital payments company doubled sales in the third quarter from a year earlier, to $1.2 billion, and flagged a rosier outlook for the rest of 2020. Its mobile hit “Free Fire” attracted more gamers while an online shopping surge helped get more customers using the associated electronic wallet.

The rapid expansion came at a price: Sea’s cost of revenue nearly doubled, too. Even so, growth is outpacing the broader southeast Asian market, where e-commerce penetration is lower than in China or the United States.

Investors have been eagerly jumping aboard. Not long ago, Sea’s then-President Nick Nash projected the Tencent-backed company would be worth $100 billion. When he decamped following a rocky 2017 initial public offering, its market capitalisation was $4 billion. After more than quadrupling this year, it stands at $87 billion and is on course for the 12-figure milestone. (By Jeffrey Goldfarb)