6 May 2020 By Breakingviews columnists 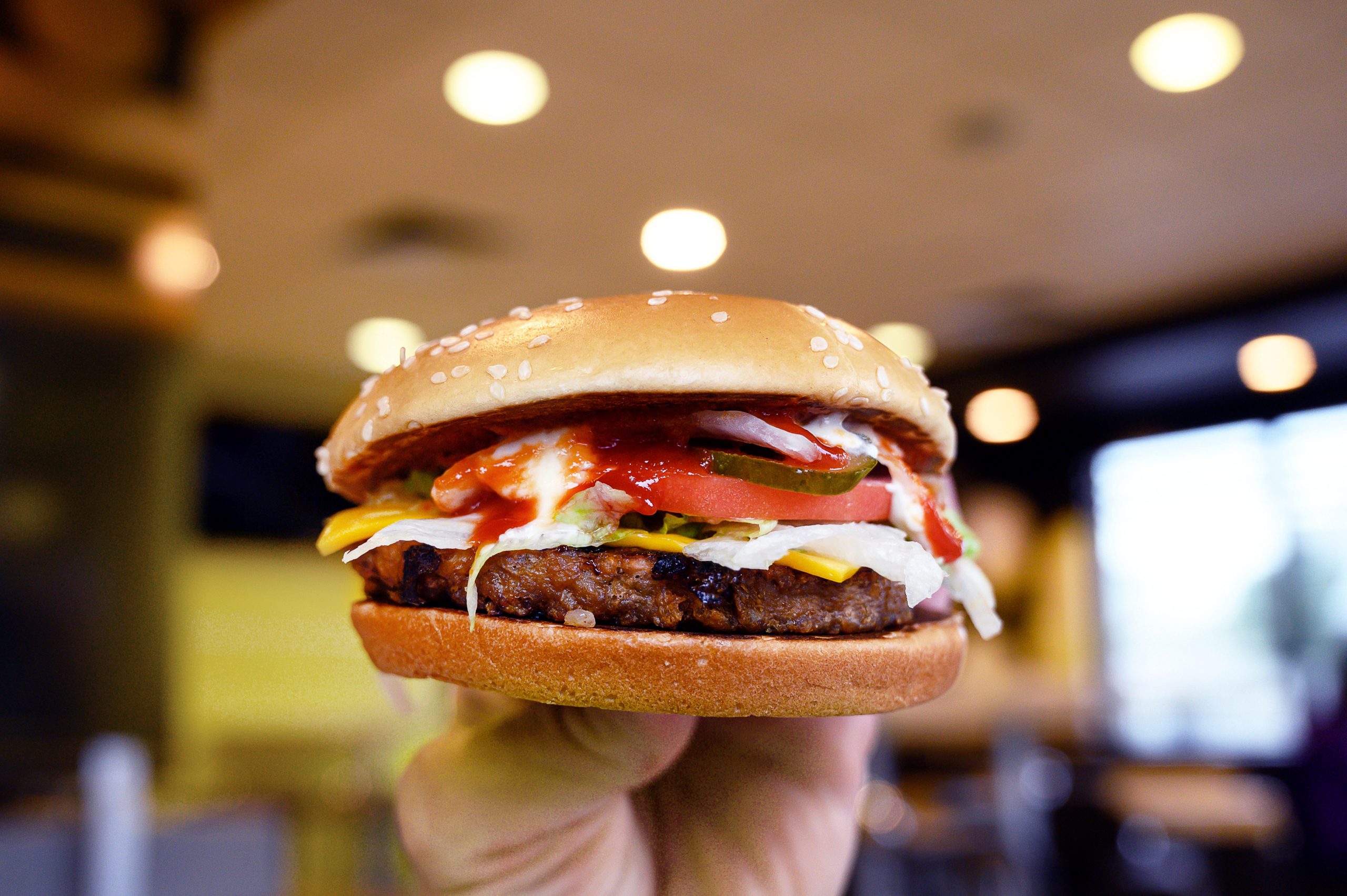 Grilling hazard. Shares of Beyond Meat jumped 23% to just over $123 on Wednesday after the plant-based meat maker reported a surprise profit for the first quarter. The $7.6 billion company on Tuesday said first-quarter net income was $1.8 million, compared with estimates of a $4.7 million loss, according to Refinitiv data. The company is taking advantage of meat shortages caused by Covid-19 outbreaks in U.S. slaughterhouses, and it plans to increase discounts to make its prices more competitive to the supply-tight animal proteins like ground beef.

That all bodes well for the hyped-up fake-meat market. The problem is that the boost has a shelf life. It, like other food suppliers, is also losing business while people eat out less. Pork plants won’t be struggling forever, and Beyond Meat still has plenty of competitors at its heels. Without a wholescale shift to fake meat, investors will get burned. (By Amanda Gomez)

Conditional like. Facebook on Wednesday named members of a new oversight board that will hear user appeals about content decisions made by the social network and its photo-sharing unit Instagram. The committee is meant to appease critics of the power that Mark Zuckerberg’s $590 billion company wields. The diverse, independent body includes ex-politicians, human rights activists and journalists.

But it is dicey for Facebook. The body is funded by a $130 million trust established by the firm, raising questions about its autonomy. Liberals and conservatives alike have accused the company of favoring the other’s interests. The board’s binding decisions could also spark accusations of bias.

Ex-U.S. federal judge Michael McConnell, one of the co-chairs, asked for patience as the group learns by trial and error. Decisions, if they have any heft, will weigh into subjects like political versus hate speech. It is an attempt to address one problem, but may create another. (By Gina Chon)

Consolation prize. Natixis managed to sweeten otherwise dire first-quarter results on Wednesday. The Paris-based investment bank announced it had slipped to a net loss of 82 million euros in the three months to March, due to trading flubs and increased bad debt charges. However, Natixis added that moves by regulators to help lenders cope with the pandemic have lowered its minimum capital requirement by a meaty 1.2 percentage points. That allowed Chief Executive Francois Riahi to cut his target common equity Tier 1 capital ratio to just 10.2%, from 11.2% currently. The implication is that Natixis could hand back some or all of 1.2 billion euros in excess capital to shareholders, equivalent to nearly a fifth of its market capitalisation, once payouts are switched back on. That would cheer up investors who have watched Natixis shares roughly halve in value this year. First, however, the bank needs to avoid further losses. (By Christopher Thompson)

No hot air. Home-sharing startup Airbnb said on Tuesday that it’s laying off 25% of its 7,500 employees. Travel has plunged amid the pandemic. Still, it’s tough news for workers who, earlier this year, expected Airbnb to go public.

Chief Executive Brian Chesky was sensitive in his letter to employees, which will be followed by one-on-one talks with managers. He detailed his rational thought process and gave workers at least 14 weeks of pay. Eight weeks of severance has been more typical in Silicon Valley.

Others have seemed tone deaf. Shared-scooter outfit Bird fired 400 employees in a quick Zoom meeting. The boss of travel startup Sonder told the New York Times that people who want to be “coddled” shouldn’t work at startups, which require a “high adversity quotient.” That’s after laying off or furloughing one-third of Sonder’s workforce. The Bay Area’s tight technology community will surely remember Chesky’s class – and other startup bosses’ lack of it. (By Gina Chon)

Not lovin’ it. Former McDonald’s CEO Steve Easterbrook is at the center of a controversy ahead of the fast-food chain’s annual meeting in May. Over the weekend, Glass Lewis recommended shareholders vote against Easterbrook’s lucrative exit pay package, worth an estimated $44 million, according to CtW Investment Group. Easterbrook was ousted in November for having a consensual relationship with another McDonald’s employee.

Executive pay has long been a point of contention, but against the backdrop of a pandemic, Easterbrook’s severance highlights a stark and troubling contrast. McDonald’s employees went on strike in April to protest measly protections against Covid-19. The company has implemented sick leave and a bonus at the stores that it owns, but with the disease threatening frontline workers, such as those at McDonald’s, Easterbook’s greased palms feel particularly unpalatable. (By Jennifer Saba)

Sugar rush. Novo Nordisk is having a good lockdown. The world’s largest provider of drugs treating diabetes saw first-quarter sales jump 14% to 33.9 billion Danish crowns ($4.92 billion). That beat the 31.5 billion crowns analysts had been expecting. The $115 billion company’s share price is up nearly 14% since the beginning of the year, beating even industry peers like Roche.

Given Covid-19 has left most of the globe sitting on its backside eating sweets, investors can expect another boost later this year. Chief Executive Lars Fruergaard Jorgensen reckons the outbreak has delayed some diabetes diagnoses, but that is likely to change later this year when a “pool of patients” finally visit their doctors. If so, Novo Nordisk’s newly approved tablet drug for type 2 diabetes could be in high demand when the full effects of a sedentary lockdown are revealed. (By Aimee Donnellan)

Jack Ma’s credit ESG. MYbank, the online bank backed by the Alibaba founder, will lower rates and crank up lending to small- and medium-sized companies. The private lender’s president told Bloomberg that it’s on track to issue 2 trillion yuan ($280 billion) in loans this year, up 18% from 2019. That will please Beijing, which wants the financial system to lend more to the private sector as it struggles to shake off Covid-19. Showing that catering to SMEs can be profitable might inspire more conservative loan officers.

A lending spree now will test MYbank’s claim that its algorithms can find quality borrowers among smaller, difficult-to-audit private companies. Success would help sell the anticipated initial public offering of its largest shareholder, Ant Financial. But the economy may take another hit as overseas demand slumps, and smaller fish will be first to fry. Should MYbank’s tech nous flunk, it could disillusion its peers too. (By Pete Sweeney)

All aboard. National Express is the latest UK company to use a tweak to shareholder rights to raise 20% of its market value, following the lead of WH Smith and Hays. The 1.2 billion pound coach operator will use the cash to pay down debt.

The group could benefit if there is a rise in staycations, while lower oil prices reduce fuel costs. However, the scenario Chief Executive Dean Finch called pessimistic on May 6 – revenue creeping up at the start of the third quarter – now looks middle of the road. With a month left in the quarter, infections in the United States, its biggest market, haven’t peaked, while its second-biggest, Spain, is in political deadlock over easing restrictions. The costs of new measures to keep customers and workers safe are also unclear. The downsides mean Finch’s “aspiration” to bring back its dividend in July 2021 may remain just that. (By Dasha Afanasieva and Karen Kwok)

Feeling plucky. Covid-19 sorts Britain’s challenger banks into the good, the adequate and the mysterious. Shares in $1.4 billion buy-to-let mortgage specialist OneSavings Bank are down 42% since mid-February – less than the big banks and also the near-60% decline for Virgin Money and Metro Bank. Investors prefer its focus on secured lending: a share price that’s 70% of forward tangible book value is pretty good.

Virgin’s relatively light common equity Tier 1 capital ratio – 13.1% at the end of 2019 – had been a concern. Decreasingly so, since it barely shrunk in the first three months of 2020, to 13%. It would still meet regulatory requirements even if 11% of loans went bad – unlikely. That leaves Metro, whose radically attenuated one-page report contained nothing on CET1 or profitability – giving investors little reason to push up its lowly valuation of 10% of tangible book value. (By Liam Proud)

A McDonald's "PLT" burger with a Beyond Meat plant-based patty at one of 28 test restaurant locations in London, Ontario, Canada October 2, 2019.