4 May 2020 By Breakingviews columnists 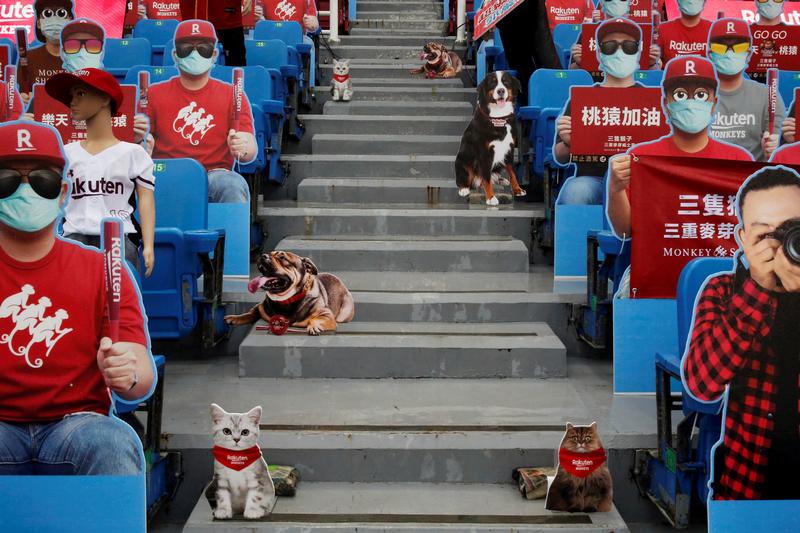 That’s good news for the Rakuten Monkeys and other Chinese Professional Baseball League teams hoping to expand their fan base. But it could also provide a road map for sports franchises considering coming back without fans – or later, slowly reintroducing them. Some Taiwanese tactics might not catch on – like replacing spectators with people-shaped placards. But with the English Premier League looking to restart and U.S. sports fans getting antsy, this an experiment to be closely watched. (By Anna Szymanski)

Eye of the beholder. At least someone still believes autonomous cars are coming on schedule. While carmakers such as General Motors have gotten awfully imprecise with their predictions of late, chipmaker Intel is keeping up the momentum, by buying transit app Moovit for $900 million.

It’s part of Intel car-parts supplier subsidiary Mobileye’s plan to roll out robo-taxis by 2022. Though later than Tesla, which still aims to have its full self-driving subscription service running by the end of 2020, it’s still punchy. Getting regulators and passengers comfortable with this emerging tech was hard before Covid-19. Now operators will have to show their cars are disinfected after each trip.

Moovit, though, is not just a self-driving play: it finds the best route for travelers regardless of transport method. And Intel’s venture-capital arm was already an investor. That should reduce the chance of Intel being driven up a dead end. (By Antony Currie)

Easy go, easy come, easy go? Even a warning from the object of their idolatry himself can’t keep an Elon Musk fan down. In morning trading on Monday, shares in Tesla recouped some two-thirds of the $11 billion wiped out on Friday afternoon after its boss tweeted “Tesla stock price too high imo.” That followed posts again lambasting the Covid-19 lockdowns, just days after he did so on the company’s earnings call.

Musk’s right about the stock. It’s back near its level just before coronavirus fears hit and now trades at a whopping 42 times 2022 earnings, according to Refinitiv – though Tesla shares have long traded out of step with reality. Trouble is, he may have breached last year’s revised agreement with the Securities and Exchange Commission on what he shouldn’t tweet about. He and his shareholders may now face another bruising round with the watchdog. (By Antony Currie)

Down payment. Tencent has picked an odd time to endorse the idea of buying now and paying later. Afterpay, an Australian group that lets shoppers delay payments for online purchases, announced Friday the Chinese internet giant had bought a 5% stake. The $6 billion company’s shares have been on a roller coaster amid uncertainty about the coronavirus-induced downturn. Afterpay’s value jumped 24% on Monday.

The buy-now-pay-later business has expanded rapidly by appealing to young consumers without credit cards. Yet it is nascent in China, which McKinsey estimates has an online retail market 2.5 times bigger than in the United States. Tencent rival Ant Financial, an affiliate of Alibaba, took a small stake in Afterpay’s Swedish rival Klarna in March.

Freefall. Private equity groups Advent International and Cinven are stuck in a lift, with no one returning their call for help. The buyout duo lead a consortium that won the battle for Thyssenkrupp’s elevator business with a 17.2 billion euro offer just before Covid-19 struck the West. Now they’re searching for investors to help cover the 7 billion euro equity portion, the Financial Times reported on Monday. They’ve already raised 2 billion euros from the Abu Dhabi Investment Authority and others.

The rest will be a stretch. Rival Kone said recently that 2020 revenue could fall by 5%-10% if “broad and strict” lockdowns persist into the second half of the year. Avoiding crowded elevators is a major obstacle to reopening offices. Advent and Cinven have little scope to absorb a deterioration: Breakingviews estimated the internal rate of return, assuming growing sales and margins, at a meagre 15%. That’s usually the hurdle rate for private equity deals. Any less will be a hard sell. (By Liam Proud)

Anbang’s uncomfortable stay. South Korea’s Mirae Asset Global Investments is walking away from a deal to buy $5.8 billion worth of U.S. hotels from the troubled Chinese insurance giant, which is fresh out of two years of regulatory administration. Anbang Insurance’s assets have been ported into a new company called Dajia Insurance, 98% owned by the China Insurance Security Fund, which is in turn controlled by the Ministry of Finance.

The financial impact on the unlisted new entity is unclear. It’s little surprise that Mirae wants out of a deal for travel-related real estate. “Certain obligations” were breached, it said without specifying. Anbang is suing: A failed deal will make it harder for Beijing to offload some of its stake to outside investors at a time when it has more pressing problems to deal with. (By Pete Sweeney)

Packing for bad weather. Samsonite International said on Sunday that it had won a breather on leverage and interest covenants until the third quarter of 2021. That’s handy. With fewer people planning business trips and holidays, there are fewer reasons to buy travel luggage. Net debt was already at $1.3 billion as of the end of last year, or nearly 3 times EBITDA.

The easier conditions should help it weather a rough few months until travel picks up: Samsonite expects net sales for the first quarter to fall by roughly 26% compared to the same period last year, and its Hong Kong-listed shares have slid 65% so far this year, underperforming local carrier Cathay Pacific Airways. If Samsonite is a proxy for future travel plans, it might need an even longer holiday on its debt terms. (By Alec Macfarlane)

Dummies replaced audience due to the outbreak of the coronavirus disease (COVID-19) at the first professional baseball league game of the season at Taoyuan International baseball stadium in Taoyuan city, Taiwan, April 11, 2020.