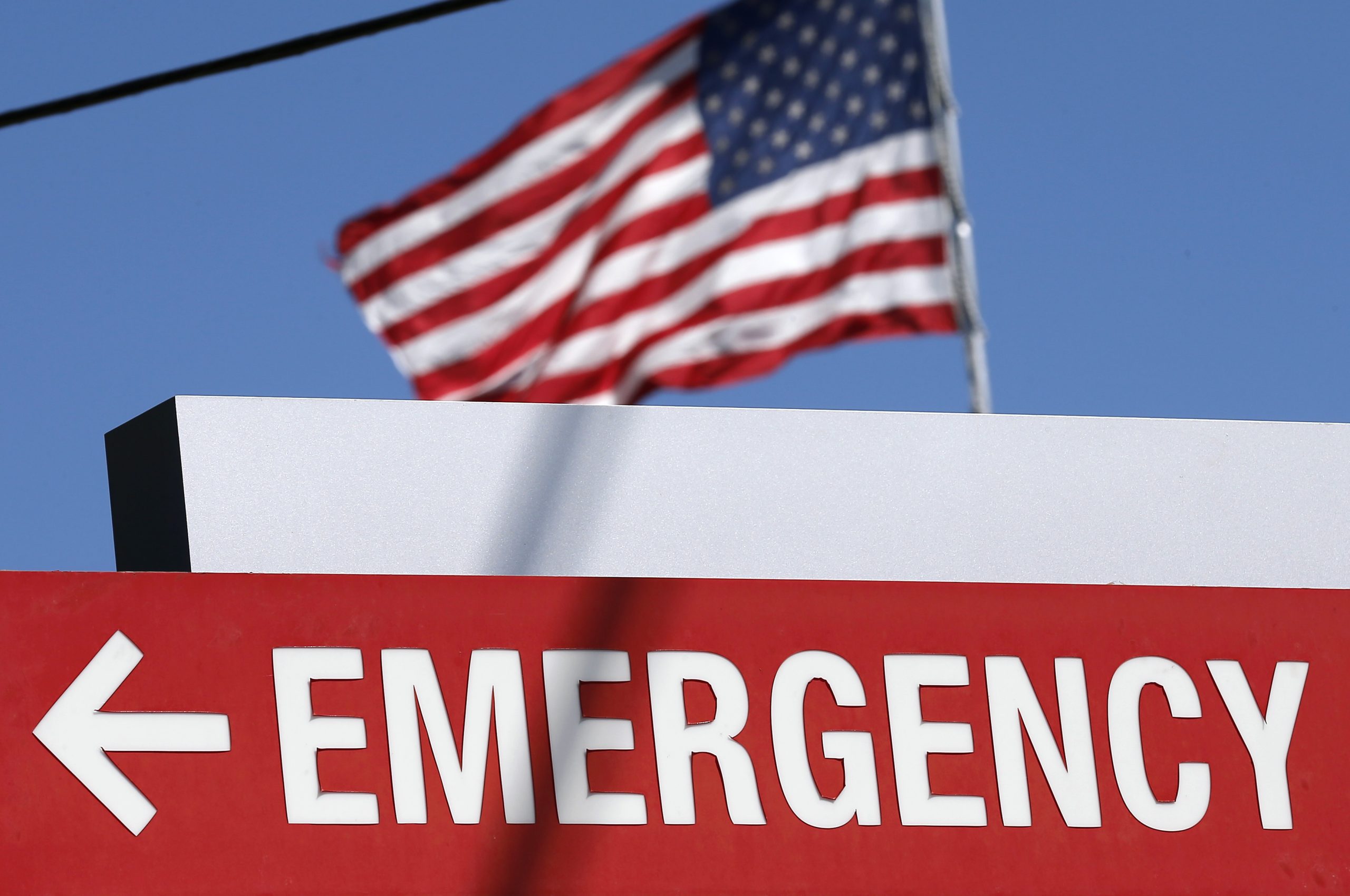 – Kering needs an opening up

Not universal. Last week UnitedHealth, America’s largest health insurer, revealed the pandemic was bolstering its bottom line. On Tuesday HCA Healthcare, America’s largest listed hospital chain, said the opposite. Adjusted EBITDA fell 13% year-on-year to $2.2 billion in the first quarter, and the company has embarked on a crash course to conserve capital – cutting costs, suspending its dividend and share repurchases, and reducing capital expenditure.

Hospitals have slashed lucrative elective procedures to keep beds available and prevent the spread of the coronavirus. That’s bad for their bottom lines, but good for insurers that would otherwise pay for them. HCA said up to March 15, admissions were up 5% and outpatient surgeries grew 2% compared to the previous year. In the first two weeks of April, the same figures were 30% and 70% lower, respectively. With HCA’s stock’s falling only around 5%, the implication is that investors think it can survive until patients return. Then it will be the insurers’ turn to take the hit. (By Robert Cyran)

Fashion quandary. Kering’s recovery prospects hinge on Italy’s willingness to let fashion companies restart production. The fashion powerhouse reported first-quarter sales of 3.2 billion euros, a 15% drop from a year earlier that was in line with rival LVMH. Italy-based Gucci, the French conglomerate’s largest brand, is a top seller amongst Chinese consumers now returning to shopping malls after extensive lockdowns. Yet, Italy’s decision to shut plants in non-essential sectors, including fashion, in March poses a logistical challenge for Kering.

Italy’s textile and fashion industry is the country’s second-largest sector, generating 95 billion euros of annual revenue. Key players are therefore clamouring to reopen before a May 3 lockdown deadline, having faced more severe restrictions than factories elsewhere in Europe. Kering has so far dealt with the closure of its Italian operations by drawing down inventories or redirecting deliveries from stores in other countries. Restarting Italian production would help it fully capture the all-important rebound in Chinese spending. (By Lisa Jucca)

Let them eat cheesecake. Restaurant chain The Cheesecake Factory secured a $200 million investment from Roark Capital, as U.S. rivals took government money instead. The company, whose shares have more than halved in two months, has secured roughly a year’s worth of operating cash flow, without White House help.

The deal is a sweet one for Roark. It gets a board seat and a 9.5% dividend, higher than The Cheesecake Factory’s regular 7.6% yield. It can also convert its preferred shares into equity at a price some 15% higher than where the stock is now, but half where it was before Covid-19 hit.

The topping on the cheesecake is that Roark took its name from the protagonist of “The Fountainhead,” one of Wall Street favorite Ayn Rand’s most famous novels. Rand passionately believed the best things happen when the government keeps its hands off business. She would have found this dish very much to her taste. (By Amanda Gomez)

Italy stallions. Political horse-trading is a top sport for Italian corporate appointments. Rome used behind-closed-doors deliberations to renew board members at large state-controlled groups. Luckily for investors, it confirmed veteran capi Francesco Starace and Claudio Descalzi at Enel and Eni, respectively. But new chairpersons close to the ruling 5-Star Movement – which has criticised Descalzi – were appointed to oversee their work. For Starace, this will mean overcoming resistance to integrate part-owned broadband operator Open Fiber with Telecom Italia.

When iron is hot. The world’s biggest miners are riding on the return of industrial activity in the People’s Republic. BHP said production for iron ore, a key steel-making ingredient, rose 6.3% year on year in the March quarter. The $92 billion company also kept its output guidance at 273 million to 286 million tonnes for the fiscal year, despite a surprisingly grim outlook for the rest of the world, where steel production is expected to “contract by a double-digit percentage” in 2020.

That largely mirrors the sentiment at rival Rio Tinto, which also pointed to strong demand from Chinese steel mills. It also helps that, barring a second wave of Covid-19 infections, Beijing may be readying more infrastructure spending and other stimulus measures to revive the economy. Supply disruptions from Brazil and other regions also bode well for the Anglo-Australian duo. The hot streak looks set to continue. (By Robyn Mak)

Message in a bottle. Danone’s water slowdown may point to another sign of changing consumer habits post-Covid-19. First-quarter sales in the division cascaded 6.8% from the year before to 928 million euros. Most of the fall was down to lower sales of more expensive smaller vessels in cafes and restaurants, many of which are shut, and on-the-go sales. The yogurt maker said first quarter overall sales grew 3.7% year-on-year to 6.2 billion euros on a like-for-like basis.

The trickle will remain even as lockdowns begin to ease as people avoid crowds, fearing recurrences of Covid-19 infections. Suspending 2020 guidance, Chief Executive Emmanuel Faber notes that global supply and demand is volatile and unpredictable, while hard-to-forecast currency effects distort numbers further. But compared to medical and baby nutrition, or other foods, water is proving to be Danone’s dampest link. (By Dasha Afanasieva)

In SAP’s bombastic house style, the company said its decision to move to a “sole CEO model” was to “ensure strong, unambiguous steering in times of an unprecedented crisis”. Is ambiguous steering not always a bad thing? Bloomberg reported that two distinct power centres emerged at SAP – one in America under Morgan and one in Germany under Klein. That’s the classic outcome of putting two ferrets in a sack. The only thing unique about SAP is that its experiment unravelled in just six months. (By Liam Proud)

Discount despair. Flogging cheap T-shirts and jeans to young teens only works in volume. Just look at UK retailer Primark: It hasn’t a made a single sale since shuttering its doors on March 22. More worrying for investors in its $19 billion parent, Associated British Foods, is CEO George Weston’s planned revival. He reckons Primark’s 376 stores across 12 countries should not be opened until Covid-19 is “suppressed”.

That suggests a long, lean wait. Even when stores are gradually reopened, they will look more like high-end boutiques than discount chains given how few customers will be admitted. This is an existential threat for Primark. The discount chain’s main selling point is its ability to sell more cheap clothing per square foot than peers. This has allowed it to lag rivals like Zara and H&M that have invested heavily in their online selection. With fewer customers and no internet business to support it, this discounter faces a higher-cost future. (By Aimee Donnellan)

Paid in full. Vivendi is doubling down on its high stakes payout gamble. Flush from the sale of a stake in Universal Music, the $28 billion Paris-listed media conglomerate voted for an increase in dividends – and share buybacks equal to 10% of total share capital – despite peers either cutting or cancelling them. It isn’t chump change either: the 60 cents-per-share bounty, a 20% increase on last year, will cost the company in which billionaire Vincent Bolloré has the biggest stake a cool 708 million euros.

Vivendi’s relatively modest net debt of 2.4 billion euros, or 1.7 times 2019 earnings before interest and tax, makes such munificence affordable. But given the French government has called on companies to show financial restraint as it aids furloughed employees, Vivendi better hope its music and TV businesses stay resilient. (By Christopher Thompson)