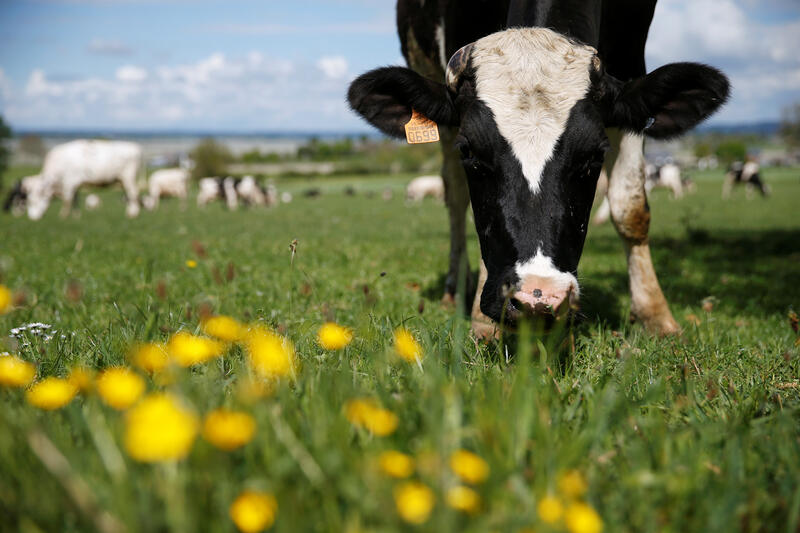 A greener diet. Healthy foods can help humans ward off Covid-19, the World Health Organization said. Now Burger King is putting cows on a cleaner path to help the environment. The Restaurant Brands International chain introduced a patty made from cows that eat lemongrass, reducing cow flatulence and, in turn, methane emissions by about one-third.

The fight against meat started well before the pandemic, but the lockdown has also been a boon for pea-patty producers. Many meat facilities became Covid-19 hotspots, which, in addition to the hype for a cleaner diet and better environment, sent shares for Beyond Meat up more than 60% in the past three months, versus an 11% increase for the S&P 500 Index.

Burger King’s move, though, takes a little edge off its environmental stink. So investors beware. What’s good for it may be bad for Beyond Meat. (By Amanda Gomez)

Junked bonds. Maybe you can beat the Fed – if you’re a garbage collector. On June 23, the central bank bought bonds issued by Waste Management with a par value of $3 million maturing in 2024. But the $44 billion leader in trash is buying back this debt at 101 cents on the dollar, according to Bloomberg. Unfortunately, the Fed paid around 105 cents.

A so-called redemption feature was triggered because Waste Management failed to close the purchase of Advanced Disposal Services in time. Progress was stymied by – wait for it – the Justice Department. The firm actually mentioned this redemption in a release the day after the Fed’s purchase, before the trade had settled.

This was bound to happen once the Fed started picking up riskier debt. Any loss will be covered by the Treasury – and the hit here will be insignificant. Still, the government has managed to be on many sides of this drama, except the one that made money. (By Anna Szymanski)

Banking’s Wile E. Coyote moment. Lenders reporting quarterly earnings this week are a bit like the cartoon canine who runs over the edge of a cliff without – at first – plunging. A fall in customer creditworthiness looks almost certain, but has not quite happened yet.

While JPMorgan, Citigroup and Wells Fargo put aside $23 billion on Tuesday to absorb bad loans, delinquencies are still mostly theoretical. At Citi, North American consumer debts overdue by 90 days or more fell slightly to just under 1% of that division’s loans. Delinquency rates also fell at JPMorgan.

Two forces are holding borrowers aloft. Banks are waiving fees and interest – Wells Fargo gave up almost $300 million this quarter. But government stimulus is also going into servicing debt. JPMorgan says that half of the credit card and car-loan borrowers to whom it has given forbearance made a payment anyway. That may not last, but as surprises go, it’s the better kind. (By John Foley)

Death and taxes. The pandemic makes more austerity a certainty for UK voters. The country’s Office for Budget Responsibility outlined how Covid-19 will hit the country’s finances in its latest fiscal sustainability report. In the watchdog’s central scenario, which assumes that effective treatments or vaccines soon become available, output will be 3% lower than forecast by 2025 and the budget deficit will still be 4.6% of GDP, over two percentage points above the forecast in March. Debt will hover just above 100% of GDP.

The longer-term outlook is spookier, as Britain’s finances suffer from an ageing population and higher healthcare costs. The added blow of the pandemic means debt could exceed 400% of GDP by 2070. To get borrowing back to 75%, every decade would need a fiscal adjustment equivalent to 2.9% of GDP, compared with 1.8% before the pandemic, the OBR reckons. Whoever is lucky enough to be prime minister will have to push through unpopular spending cuts and tax hikes. (By Neil Unmack)

No magic pill. Walt Disney is in an awkward position. The $210 billion entertainment giant is temporarily closing its Hong Kong theme park on Wednesday after more than 50 new cases of Covid-19 prompted the government to mandate new measures to contain its spread.  Yet the Magic Kingdom barreled ahead with plans to reopen Walt Disney World in Orlando, Florida last Saturday, even though the Sunshine State added 15,300 new Covid-19 cases on Sunday, more than any other state has reported, according to the New York Times.

Disney outlined all the steps it was taking to manage an outbreak, including temperature checks and required face covering, in a video reminiscent of airline flight-safety instructions. But the situation can get turbulent, fast. The National Basketball Association said on Monday that two of its players tested positive for Covid-19 while under quarantine. Where? Walt Disney World. (By Jennifer Saba)

Obstacles remain. Visas for individual visits, which account for 73% of Guangdong arrivals in Macau, remain on hold. A mooted travel bubble between Hong Kong and Macau looks less likely as the financial hub grapples with a resurgence of Covid-19 cases. With operators paying an estimated $15 million in daily operating expenses, according to Morgan Stanley, the news is nonetheless welcome. (By Sharon Lam)

Lighter basket. Ocado investors have received another mixed bag from the online grocer. Ocado’s army of vans delivered sales growth of 27% in the first half of the year but its technology business continued to burn through cash and wipe out profits. Group EBITDA fell 36% to 19.8 million pounds, leaving Chief Executive Tim Steiner nursing a pre-tax loss of 40.6 million pounds. The 15 billion pound company’s shares fell nearly 4%.

Grocery sales were a big plus, up 87%. But uncertainty in U.S. and British markets meant it was unable to ramp up its outlook. In its UK backyard, where the bulk of its warehouses sit, gross domestic product only grew 1.8% in May after falling over 20% in April. This could mean consumers cutting back on bulky online grocery bills. As long as Ocado’s chunky valuation is linked to rolling out big and costly warehouses, shareholders will have to get used to some knocks. (By Aimee Donnellan)

Clock ticking. Swatch’s centre of gravity is shifting rapidly towards mainland China. The Swiss watchmaker reported its first ever half-year loss on Tuesday, with net sales down 46% at current exchange rates. Yet it remained optimistic – retail sales in China leapt 76% in May and 60% in June. In Hong Kong, traditionally an Asian watch hub, Swatch recorded almost no sales due to political unrest.

Mainland China’s importance to Swatch has grown since pro-democracy protests in the former British colony kicked off in 2019. Hong Kong accounted for an estimated 10%-12% of net sales in 2018, but that slumped to 6%-7% at the end of last year, when luxury groups started pulling down the shutters. By contrast, analysts reckon Swatch sales on the mainland accounted for a quarter of total revenue last year. With Hong Kong’s woes showing few signs of easing, the shift is starting to look permanent. (By Lisa Jucca)

A dairy cow of the Holstein breed stands in a field in Montitier, as the spread of the coronavirus disease (COVID-19) continues, near Le Mont-Saint-Michel, France April 18, 2020. Picture taken April 18, 2020.