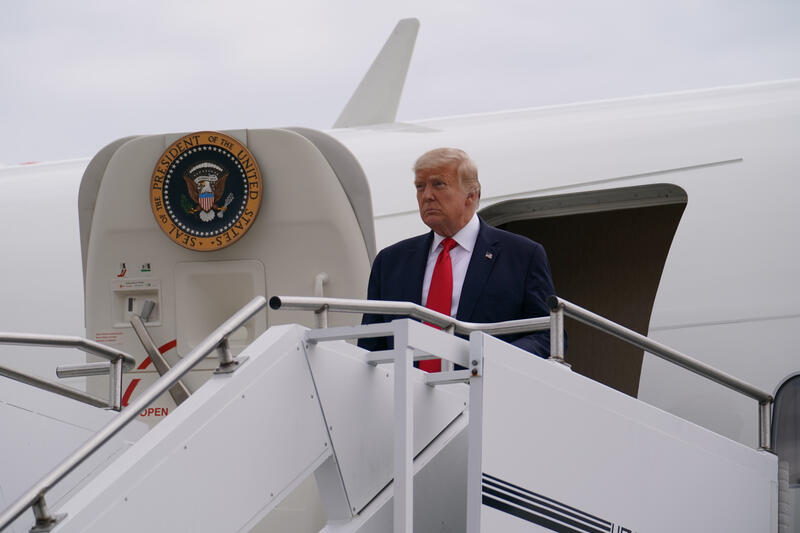 October surprise. U.S. President Donald Trump, who is personally battling the coronavirus, is now trailing Democratic nominee Joe Biden by a full 10 percentage points, according to a Reuters/Ipsos poll released on Sunday. Adding insult to injury, almost two-thirds of Americans polled think he could have avoided contracting Covid-19 if he’d taken it more seriously.

This highlights arguably the president’s weakest point just a month before the vote: his handling of the pandemic. The fact that his own physician created confusion about the severity and timeline of Trump’s fight with the illness over the weekend won’t help.

These numbers might be good news for investors if they suggest reduced chances for a contested election. If Biden has a significant lead over the president on election night, before all the mail-in ballots are counted, Trump will struggle to mount a legal challenge to the results. A chaotic week in October might presage a less raucous one in early November. (By Anna Szymanski)

Fashion loss. Japanese designer Kenzo Takada has succumbed to Covid-19, aged 81. His tragic death coincided with a subdued Paris fashion week and comes at a difficult time for the global luxury goods industry. Kenzo, who founded the brand known for using Japanese floral prints in France in 1970, had long retired from high fashion, having sold his eponymous brand to French behemoth LVMH for about $80 million in 1993.

Kenzo’s brand survives him but, like rivals, it faces a tricky future. The pandemic has disrupted international travel, a key source of revenue. Despite signs of resurgent demand in mainland China, fashion houses are also grappling with a second wave of virus cases in Europe. Britain’s Mulberry, which posted an annual loss on Monday, reported “alarmingly low levels of footfall” at its stores. If new restrictions kick in, brands will face a very tough winter. (By Lisa Jucca)

No time to live. James Bond will not save the cinema industry. Cineworld on Monday lost more than half of its market value after it said it will close all its UK and U.S. movie theatres later this week. The trigger for the decision was the delay of the release of 007’s next mission, “No Time to Die”, to April next year. The leaves silver screens without a blockbuster until “Wonder Woman 1984”, a superhero movie, which is due to arrive on Christmas Day.

Cineworld’s move, which could lead to the loss of about 45,000 jobs, will help preserve its dwindling cash reserves. Some 561 of its 778 sites had opened as of Sept. 24, but Cineworld is burning $50 million to $60 million a month. Chief Executive Mooky Greidinger needs flexibility from creditors who were owed $4 billion at the end of June; first-half EBITDA was just $53 million. The future looks bleak. (By Karen Kwok)

Market highs. Web retailer JD.com’s online pharmacy has filed to go public in Hong Kong, taking advantage of China’s booming healthcare sector. JD Health is betting on two trends: that the pandemic will raise overall health awareness and related spending, and that more patients will shift online for doctor consultations and other services.

The prognosis looks good so far. Revenue in the six months to June surged by more than three-quarters year-on-year to $1.3 billion, thanks to increased over-the-counter drug sales, as well as immunity-boosting supplements and the like. Encouragingly, JD Health saw a near sixfold rise in online consultations, averaging 90,000 a day in the same period. Shares of Hong Kong-listed rivals Alibaba Health Information Technology and Ping An Healthcare and Technology are up 113% and 74% respectively this year. JD Health checks all the right boxes. (By Robyn Mak)

The bad and the ugly. The fortunes of the euro zone’s service and manufacturing sectors are diverging. Purchasing managers’ surveys on Monday showed the former shrank in France, Italy and Spain in September, and barely grew in Germany. As a result, the euro zone purchasing managers’ index for services fell back below the 50 mark that separates growth from contraction.

While similar soundings of euro zone manufacturing activity were more upbeat last week, that will be of limited comfort to governments and European Central Bank boss Christine Lagarde. Services account for about two-thirds of the bloc’s GDP. Policymakers are trying to prevent the pandemic from scarring economies. But rebounding Covid-19 infections mean new restrictions; businesses in the services sector cut staffing for a seventh month in September. Jobs were cut even in Britain, which is outside the euro zone and where services expanded last month. Fiscal policy has more heavy lifting to do. (By Swaha Pattanaik)