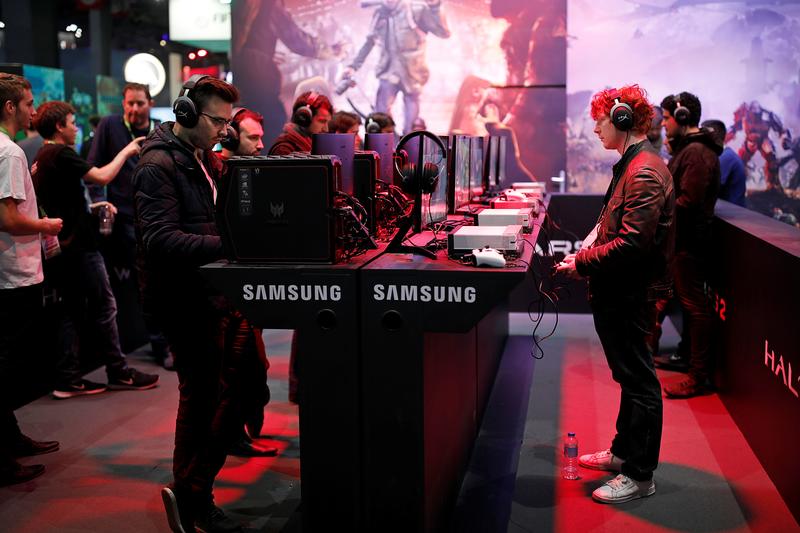 Not all fun and games. Coronavirus-related lockdowns have been good for the $130 billion video game industry. Homebound gamers helped fuel revenue surges at industry heavyweights like Activision Blizzard and Electronic Arts. Spending on video games in the United States reached $1.2 billion in June, the highest June total in over a decade, according to research firm NPD.

However, the industry is also grappling with remote-working challenges. On Tuesday 343 Industries, part of Microsoft’s Xbox Game Studios, delayed the release of “Halo Infinite”, a science fiction shoot-’em-up, to 2021. The company blamed development challenges “including the ongoing Covid-related impacts”. This could be a significant blow: The last big-ticket instalment of “Halo” pulled in more than $400 million in its first week, according to the Verge.

Gaming companies have so far adapted relatively well to lockdown; Ubisoft’s annual report noted a “manageable” effect on production schedules. More delays could be a problem going into the lucrative holiday season. (By Oliver Taslic)

Zoomed out. Marc Benioff’s Salesforce.com has offloaded a stake in Zoom Video Communications it bought in the video-conferencing outfit’s initial public offering, according to a company filing. Salesforce snapped up $100 million of the stock when Zoom went public in April 2019, according to news reports. The company’s ventures arm also bought shares in the Dropbox and SurveyMonkey IPOs, according to CNBC.

Though the exact dates of Salesforce’s second-quarter sales aren’t available, Zoom has been a big beneficiary of remote communication during coronavirus lockdowns. It went public at $36 a share. Between April and June 2020, the stock traded between $109 and $262, by Refinitiv data. Salesforce made three to seven times its investment in around a year.

Zoom’s stock is currently below where it ended the second quarter. Whether Benioff’s crew picked the top may become clearer when Salesforce reports its second-quarter numbers in a couple of weeks’ time. For now, it appears to have made the most of the pandemic. (By Richard Beales)

Simon and Brooks. Lockdowns caused by Covid-19 may be crushing mall shopping, but it isn’t stopping Simon Property from shifting its strategy. The $21 billion U.S. shopping-center owner, a so-called real estate investment trust, is buying Brooks Brothers out of bankruptcy with Authentic Brands for $325 million.

Tenants of Simon and other landlords are trying to pull out of leases and shutter stores, and Simon’s interest in having more control over their payments predates the pandemic. A deal in February to buy Forever 21, also with Authentic Brands, suggests that it is becoming ever more eager to go further than usual to ensure its bills are paid.

Meanwhile boss David Simon’s decision to walk away from one of his company’s commitments in July, ditching a deal to buy rival mall owner Taubman Centers, isn’t exactly a vote of confidence in his day job. Without shoppers trotting back into malls, there is only so much Simon can do. (By Lauren Silva Laughlin)

Delivery boom. Online retailers have made the most of lockdown. Fashion group ASOS said on Wednesday that sales and pre-tax profit in the current financial year would significantly exceed market expectations. One reason is fewer returned items. The other is a surge in demand for workout gear from its main client base, shoppers in their twenties, while they were housebound. Something similar happened in America, where sweatpant sales leapt 80% in April compared with a month earlier, according to the New York Times.

Sweatpants may come in handy given surging demand for food to be delivered to doorsteps. Just Eat Takeaway.com, the delivery company that in June offered to buy American Grubhub, reported adjusted EBITDA of 177 million euros in the first half of the year, two-fifths more than analysts had expected. With people yet to return to their pre-coronavirus habits, comfort eating and comfy clothes may remain in high demand. (By Aimee Donnellan and Karen Kwok)

Bad record. Britain’s second-quarter recession was brutal. GDP shrank by a record 20.4% compared with the first three months of the year, official data showed on Wednesday. That was worse than even the hardest-hit euro zone country, Spain. The explanation is simple. The tough UK lockdown lasted for more of the second quarter than similar measures in the four biggest euro zone countries and the United States.

Still, British GDP has fallen by more than any other Group of Seven industrial nation even over the first half of 2020. A recovery started in June. How fast will it be? The Bank of England predicted last week that GDP won’t exceed its pre-Covid peak until the end of 2021. Finance minister Rishi Sunak opposes extending a furlough scheme that expires in October. Other stimulus plans may be needed to ensure the rebound is no slower. (By Swaha Pattanaik)

Clipped wings. The skies remain dark for Hong Kong’s Cathay Pacific. The troubled air carrier recorded a $1.3 billion net loss for the first half of 2020. Chairman Patrick Healy called the period “the most challenging the group has ever faced”, as travel restrictions slashed passenger numbers by 76% year-on-year, with recovery nowhere in sight.

Its only hope now is freight. The airline had an 8.8% boost in cargo revenue, in line with regional peers. Singapore Airlines enjoyed a 35% jump in the same category in the second quarter, while Taiwan media reported that the island’s China Airlines avoided a loss entirely due to record income from hauling goods. However, the freight fairy tale might be short-lived as fees return to normal. Cathay shares are now trading at around a quarter of their 2010 peak, and its home market remains in deep recession. It may not regain altitude any time soon. (By Jamie Lo)