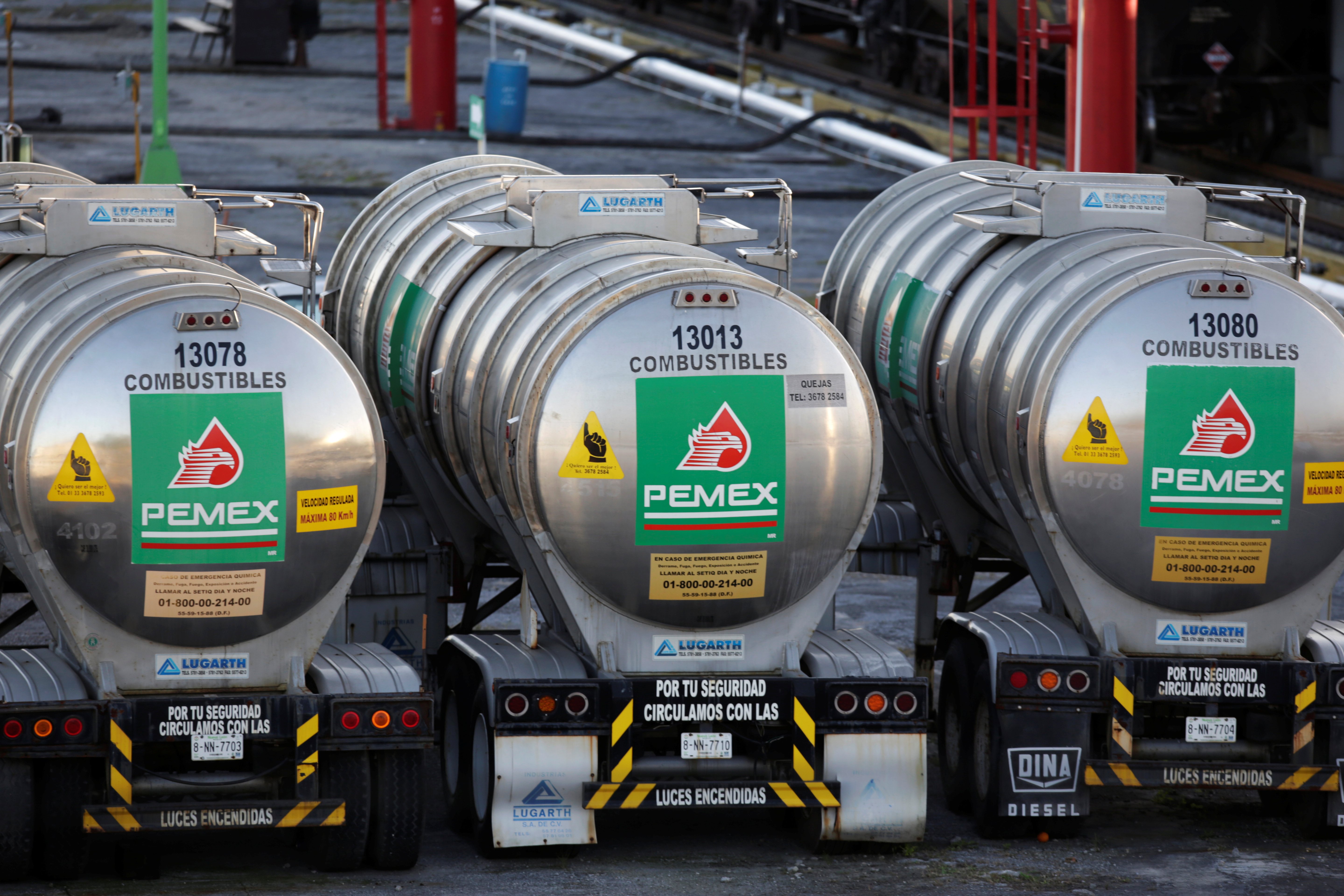 The corner of bad and worse. Mexico’s hulking state-owned energy firm Pemex is having a rough 2020. Global oil prices are shockingly low. Emerging markets saw record investment outflows last month. The International Monetary Fund expects Mexico’s economy will contract by 6.6% this year. And the company, whose finances are interwoven with the weak sovereign’s, has become the world’s chunkiest fallen angel, to boot, after Moody’s cut its credit rating to junk on Friday. This should force some investors who can’t hold junk to unload their Pemex bonds.

So the issues are compounding. While Mexico had a small win against the Organization of the Petroleum Exporting Countries earlier this month when the country agreed to lower production by only 100,000 barrels a day, Pemex is facing higher funding costs and questionable oil demand. It’s going to be a long road. (By Anna Szymanski)

Would you credit it? Every bond trader worth her salt knows what happens in a crisis: Prices tank, the difference in price to buy and sell gapes wide open and investors – and Wall Street banks – can’t dump their paper. Not this time around. Banks made a ton of money, as last week’s earnings for Citigroup, Goldman Sachs and others showed. Unlike in the 2008 rout, trading volume went up by 39% for investment-grade and 50% for junk debt, MarketAxess pointed out.

Sure, e-trading is better and easier than a dozen years ago. But more players are jumping in, too. MarketAxess signed up 125 new firms to a key trading platform in March, 25% higher than a year earlier. And the majority of them were asset or investment managers, with a few insurers and non-financial companies thrown in, to boot. The big question is whether they are confident enough to stick around as markets calm down. (By Antony Currie)

Baby bust. Ikea is betting that the coronavirus will lead to a surge in birth rates. Jesper Brodin, chief executive of Ingka Group, which owns the Swedish retailer’s store network, told Reuters in an April 17 interview that he expects to sell more baby-related goods in seven or eight months’ time, as past crises have always resulted in baby booms. There is some evidence to back Brodin up, although his timing might be a little off. Research by the Institute for Family Studies shows that birth rates typically fall in the months following an epidemic before recovering well beyond the pre-epidemic level within 19 months.

But Covid-19 is likely to end up being several calamities in one. As well as a health crisis, it will also be an economic catastrophe. The last financial crisis prompted birth rates to slow in the United States as well as Greece and Spain. France’s birth rate, on the other hand, rose in 2008, perhaps helped by its robust social safety net, euractiv reported. Brodin’s hoped-for boom may rely more on governments putting in place effective economic stimulus packages than it does on basic instincts. (By Dasha Afanasieva)

Double helping. Even in the era of trillion-dollar companies, most rational MBAs wouldn’t define an enterprise worth $1.6 billion as a small business. Yet under the Paycheck Protection Program of the $2.2 trillion CARES Act passed by Congress to mitigate economic hardship from the coronavirus, Shake Shack qualifies. That’s because it and other restaurant chains like Ruth’s Hospitality effectively designated individual outlets as small businesses, allowing them to dip their snouts into the taxpayer-funded trough.

The resulting backlash when the $349 billion available dried up, leaving many legit small firms without help, risks undermining the program. That would be a shame, as more than 90% of the money went to firms claiming $5 million or less. Danny Meyer is now returning the $10 million his burger chain received. But chalk the decision up to capitalism, not altruism. Shake Shack raised $150 million selling new shares last week. (By Rob Cox)

Weak antibodies. Investors can’t work out whether Koninklijke Philips is having a good pandemic or not. After a so-so trading update on Monday, where Chief Executive Frans van Houten promised “modest” growth this year, the $38 billion Dutch medical-technology group’s shares are roughly where they were in early March. Sales of fancy toothbrushes have collapsed, as have non-Covid-19 related medical treatments. But the ventilator business is growing like the clappers.

The optimistic long-term case is that governments worldwide will boost health spending after the crisis, vowing never again to be caught out by shortages of medical equipment. They might even invest in Philips’ “telehealth” offerings, which provide software allowing remote treatment of patients. Investors aren’t wholly convinced, however. Including debt, the company is valued at 19 times trailing operating profit – a 5% discount to its five-year average. Philips’ clean bill of health may have to wait. (By Liam Proud)

Banking on confidence. The $65 billion HDFC Bank has long been the most unflappable of Indian banks, regularly logging around 20% quarterly year-on-year loan growth. That pace won’t continue in the midst of an ongoing nationwide lockdown, but management had good reason to be not too worried by future Covid-19 pain as it presented earnings on Saturday for the full year to end March. The bank is expecting fallout no worse than the levels of the 2009 global financial crisis, with gross non-performing loans remaining within about 2% of the total, compared to the current 1.26%.

Even if there is an unexpected spike, say in its unsecured loan portfolio, the bank’s common equity Tier 1 capital is a staggering 16.4%, or 8.9 percentage points above the regulatory minimum. That keeps long-serving boss Aditya Puri on course to go out on a relative high later this year. And with a shortlist of candidates to succeed him going to the regulator for approval, fears of a disorderly succession have also eased. HDFC Bank shares rose 3.7% on Monday as the benchmark Nifty 50 was broadly unmoved. Investors had every reason to cheer. (By Una Galani)

Gravy train. Britons may be getting back their taste for Bisto. Premier Foods on Monday said that 2020 operating profit would be at the top end of market expectations. After years of trying to get consumers excited about its unfashionable processed foods, the maker of grey-brown gravy granules and Oxo stock cubes now reckons sales grew 3.6% in the 52 weeks ending March 28 and approximately 10.5% in March.

Of course the bump from UK stockpiling may be temporary. But bulls would argue that Covid-19 will change consumer behaviour in the long term. Premier’s agreement to cut the value of its future pension-deficit contributions by roughly 45% in today’s money is more lasting. The shares rose 16% on Monday morning. The company’s stock is back on the menu. (By Dasha Afanasieva)

Stroll in the park. Formula 1 magnate and Aston Martin Lagonda saviour Lawrence Stroll can sleep a little easier. Shares in James Bond’s favourite carmaker rose by a tenth on Monday after a rescue rights issue which raised a gross 365 million pounds. The deal means Stroll has spent a total of 262 million pounds for a 25% stake in the company, whose production has been hammered by the coronavirus pandemic, leading to a three-fifths year-to-date fall in its market value. Monday’s jump reverses some of that loss, giving Aston Martin an equity value of around 972 million pounds – a mere 7% shy of Stroll’s implied purchase price.

Heavyweight investors have taken minority stakes too, including Swiss billionaire Ernesto Bertarelli and Mercedes F1 boss Toto Wolff. Stroll, Aston Martin’s new executive chairman, said the priority was restarting factories to fulfil orders for the DBX, the carmaker’s first SUV, which is needed to boost cash flow. Whether customers who have been rationing toilet roll still want to splurge 150,000 pounds per automobile is moot. But at least Aston Martin is in the right gear. (By Christopher Thompson)

Tanker trucks of Mexico state oil firm Pemex's are seen at Cadereyta refinery in Cadereyta, on the outskirts of Monterrey, Mexico January 23, 2019.