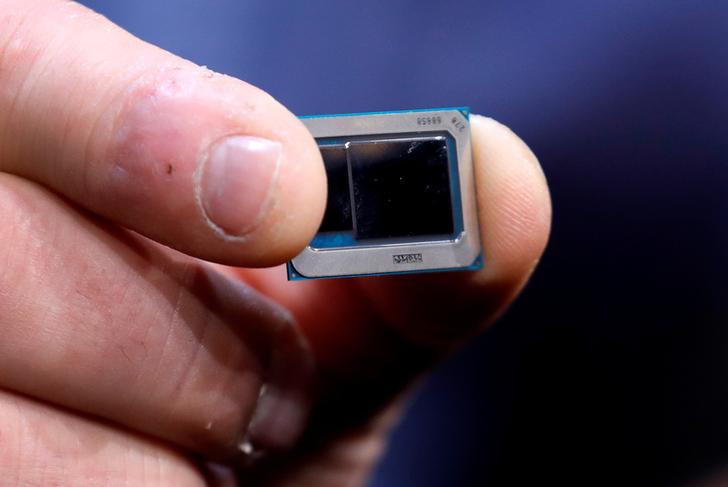 Swansong. Intel is set to report fourth-quarter 2020 earnings after U.S. markets close on Thursday. The chipmaker could hit a record $75 billion in revenue for the year, according to estimates compiled by Refinitiv, and annual profit won’t be far off its best, either. Yet Chief Executive Bob Swan won’t be crowing: He’s on the way out. Intel announced his departure just last week, saying ex-VMware boss Pat Gelsinger will take over.

Investors will be examining the quarterly figures for deterioration in its business. But their focus will be looking ahead to what Gelsinger can do to restore Intel’s technological lead and compete more effectively with rival manufacturers like Taiwan Semiconductor Manufacturing. With the new CEO taking over in mid-February, they will have to wait a little longer to find out. (By Richard Beales)

Over a barrel. When the world is divided and sick, gunmakers make hay. Shares in Sturm, Ruger more than doubled between mid-March last year and Jan. 6, when armed rioters stormed the U.S. Capitol. Smith & Wesson’s stock has soared too. The 3.9 million firearm background checks logged in December were the highest on record.

The gun run has lost some steam since then, yet its stock-market beneficiaries remain far above year-ago levels. Even though gun deaths are an epidemic too, President Joe Biden’s new government has limited power to rein in gunsmiths without support from Republicans, which in the past has been minimal.

There are nonetheless other ways life can get harder for ironmongers. In the last week alone, Facebook banned ads for many weapon accessories. The National Rifle Association has filed for bankruptcy protection, and some Democrat lawmakers want a Trump-era rule requiring lenders to do business with gunsmiths to be scrapped. Gunsmiths have customers aplenty, but ever fewer friends in high places. (By John Foley)

Euro boost. The European Commission is on a mission to make the euro more globally relevant. Today, the single currency represents 30% of foreign exchange reserves; but that proportion has not changed since the euro was launched in 2002, Economy Commissioner Paolo Gentiloni told a Reuters Breakingviews Predictions event on Thursday. Meanwhile the dollar’s proportion of those reserves has slipped from 70% to 60%, as the yuan and other currencies muscled in.

There are signs euro usage will be on the rise. Reacting to the pandemic, EU’s debt issuance will jump nearly 20-fold to 1 trillion euros by 2026. The EU is also already riding a sustainability wave: half of all green bonds in issue are denominated in euros, including notes from outside the bloc. Finally, the number of energy contracts in euros is rising fast. Challenging the dollar’s dominance won’t be easy, but now is the time to give it a shot. (By Lisa Jucca)

Downbeat. Michael Eavis could learn from K-pop. The founder of Britain’s Glastonbury music festival on Thursday cancelled the iconic summer event, scheduled for June. It’s obviously a bad idea to gather over 100,000 people for a five-day party in the middle of a pandemic. And Eavis is hardly alone in trying to figure out when live music will come back. Coachella, the U.S. music festival, has already postponed twice. Postponing but not cancelling events means the organisers do not need to refund all of the tickets. But that can’t last forever without risking reputational damage.

Still, some organisers have dabbled online with huge success. K-pop titan BTS’s virtual concert, which charges $44.55 for a one-day ticket, drew nearly 1 million fans to pay and watch, banking close to $20 million in ticket sales. To survive the virus shock, Eavis, and fellow players like Live Nation, may need to take some Korea advice. (By Karen Kwok)

Flying high. If 2021 is the year for optimism, United Airlines is leading the way. The company’s fourth-quarter operating revenue fell 69% to $3.4 billion from a year earlier while it booked a net loss of $2.1 billion, below analysts’ expectations according to Refinitiv data. But the company led by Scott Kirby, who took the pilot’s seat last May, is looking to the future. He laid out a plan to get United’s EBITDA to exceed the 2019 level by 2023, driven by a cost-savings plan with a recovery in mind.

The good news for United is that it only has one more quarter to report before year-on-year comparisons will be against a 2020 period torpedoed by Covid-19. The bad news is that it has no control over the pace of a global travel rebound. Two years seems like a reasonable guess at a return to some sort of normal. Meanwhile, the company last quarter continued to burn through $33 million per day including debt service and severance. With $27 billion of long-term debt on the balance sheet, Kirby has every reason to hope the glass is half full. (By Lauren Silva Laughlin)

Revenue rose more than 7% in the period from a year ago, while profit slipped as patients caught up on deferred procedures. But earnings for the full year rose 11% to $15.4 billion. Reaping bigger profit during a pandemic cheers investors, but probably doesn’t enthuse the public. That may matter for politicians.

Exactly how newly inaugurated President Joe Biden plans to reduce the number of people without health insurance, 33 million according to the National Center for Health Statistics, is still up in the air. But it could negatively affect UnitedHealth’s business.

Rapid growth in a unit that provides healthcare services, pharmacy benefits, and analytics provides some diversification from insurance. The core business, though, is heavily regulated. Health insurers have done remarkably well over the past decade; reforms could dampen growth. (By Robert Cyran)

Final approach. Norwegian Air Shuttle just found a reserve parachute, although there’s no guarantee it will deliver a safe landing. Norway’s government changed course on Thursday, saying it was prepared to backstop the struggling carrier’s rescue plans, which involve ditching its transatlantic ambitions and more than halving its fleet. The catch is that shareholders – either new or existing ones – must chip in at least $532 million as well. That could be a stretch.

Even after a 14% share price jump on Thursday morning, Norwegian’s market value is only $318 million, just over half the required cash injection. Nor has Oslo outlined the terms of its hybrid-loan largesse, other than to say it doesn’t want to end up a shareholder. Norwegian’s current owners probably felt the same before they agreed to a $4.3 billion debt-for-equity swap last year. Having to pay extra to stay on a potentially doomed flight doesn’t sound like fun. (By Ed Cropley)

Room service. Upscale Chinese hotelier Zhejiang New Century is looking to check out of equity markets just two years after its initial public offering. Led by Sequoia China and a hospitality-focused investor, the buyout group has offered a 25% premium at HK$18.15 per share, valuing the company at some $660 million.

Among the reasons cited for the deal is the Covid-19-related pain felt by New Century’s 261 hotels. First-half losses last year totalled $14 million after a $13 million net profit over the same span in 2019. China’s economic rebound should have helped improve second-half performance, but that may not be the real point for many shareholders. Even though Zhejiang’s closely held and thinly traded stock had recovered from its pandemic swoon, shares had yet to regain the HK$16.50 IPO price. That means the offer probably says as much about liquidity as it does about the future of travel in China. (By Jennifer Hughes)

Don’t bank on it. The descriptions “pleasant surprise” and “European bank” are not often conjoined. Spain’s Bankinter is doing its darndest to change that. On Thursday the 4 billion euro Iberian lender reported a respectable 7% return on equity for 2020 as bad debts came in slightly lower than previously expected, at 63 basis points of total loans. Generously ignoring provisions specifically related to Spain’s worsening macroeconomic situation would have lifted Bankinter’s ROE to 11%.

Bankinter predicts no additional pandemic-related provisions for this year and a lower number of bad loans. That partly reflects the 11% growth in Bankinter’s corporate loan book in 2020, fuelled by government guarantees. If the forecast proves accurate, the shares should trade closer to the bank’s book value. They’re currently valued at around 90% of their estimated 2021 book value, according to Refinitiv forecasts. Bombed-out domestic peers Caixabank and Banco de Sabadell, which trade at just 49% and 17% of 2021 book value, respectively, have even more scope to pleasantly surprise investors. (By Christopher Thompson)

An Intel Tiger Lake chip is displayed at an Intel news conference during the 2020 CES in Las Vegas, Nevada, U.S. January 6, 2020.