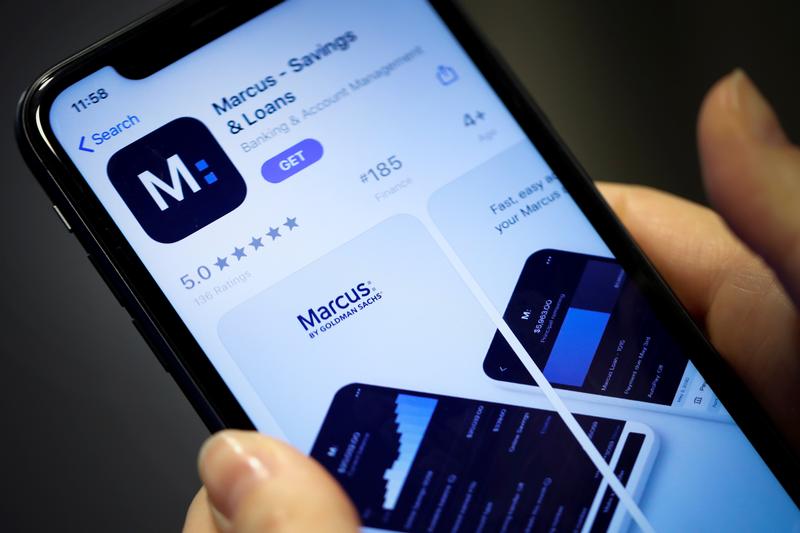 – Goldman Sachs in the UK

– Deutsche Bank in the U.S.

Sachs appeal. It’s not often that Goldman Sachs worries about being too successful. Yet that’s the conundrum facing the Wall Street firm’s retail arm in Britain. The local offshoot of Marcus will stop opening new savings accounts after attracting too much money, Reuters reported on Tuesday.

In less than two years the UK business has signed up 500,000 customers. The pandemic-induced dash for cash heightened its appeal. Despite lowering the annual interest rate it pays to a hair over 1% last month, Marcus has attracted 8 billion pounds from 100,000 new customers since February, taking the total to 21 billion pounds.

That’s close to the 25 billion pound threshold at which UK regulators require retail deposits to be “ring-fenced” in a separate bank, with strict limitations on lending. Efforts to persuade the authorities to raise the threshold have so far failed. Until that changes, existing Marcus customers are members of an exclusive club. (By Peter Thal Larsen)

Room for Vroom. Tuesday’s stock-market debut for online used-car seller Vroom captures several prevailing moods. Its shares more than doubled on Tuesday from the price set the day before, sending its market value north of $5 billion. A string of initial public offerings including Warner Music and ZoomInfo Technologies have taken off in the past week, underlining the current exuberance of equity investors.

Vroom hits other Covid-19 hot buttons. While its own used-car volumes have surged, U.S. auto sales overall have slumped during the recent months of widespread lockdowns. Motor vehicle purchases could rebound robustly, potentially further boosting Vroom. And, of course, the company does it online without the need for so much as a handshake. Social distancing has surely accelerated virtual shopping. Cars – until now one of the markets least penetrated by e-commerce – are no exception. (By Richard Beales)

Saving up goodwill. Deutsche Bank has been allocating more capital to its U.S. investment bank, regional head Christiana Riley told the Financial Times. So it might. Markets are hitting record levels, and Deutsche has a rocky history with U.S. regulators to put behind it. It was the only major lender to fail Federal Reserve stress tests in 2018, and in March was criticized by watchdogs for weaknesses in its money-laundering controls, Germany’s Suddeutsche Zeitung reported.

It’s not the only big bank seeking rehabilitation. The Fed in 2018 forced Wells Fargo to cap its balance sheet for bad behavior. By zealously distributing emergency loans to U.S. businesses, the San Francisco-based lender has won a temporary reprieve. It’s too soon to say whether the good vibes will stick – federal investigators are already probing Wells Fargo’s government-backed loans. Even so, besmirched lenders may find Covid-19 is a kind of second-chance saloon. (By John Foley)

Enrial deal. So much for European bank investors’ optimism. Having rallied 28% between the start of May and Monday, the Euro STOXX banks index dipped almost 4% on Tuesday after Andrea Enria said he may extend a moratorium on dividends and share buybacks. The European Central Bank’s chief supervisor has already asked lenders from BNP Paribas to Intesa Sanpaolo to hold off on such measures until October, and instead preserve capital for lending.

An extension could make sense, particularly if banks’ second-quarter results reveal that companies are still desperate for cash. As Breakingviews has written, capital is currently worth more to the economy on bank balance sheets, where it supports lending, than in investors’ pockets. Yet such a move would also underline the dismal prospects for lenders, who are simultaneously grappling with low rates. Bank bosses boast about being part of the solution, not the problem, in this crisis. That has a cost. (By Liam Proud)

Engine trouble. France’s 15 billion euro rescue package for its aerospace industry doesn’t fly. And not just because of some dubious doubling counting. Almost half of Finance Minister Bruno Le Maire’s goody bag is accounted for by a 7 billion euro Air France loan announced in April. Then there’s another 600 million euros of existing defence orders that have merely been brought forward.

Of the genuinely new relief for Airbus and others, Le Maire’s largesse is aimed more at preserving aerospace jobs than helping the sector adjust to the reduced demand for aircraft. That’s understandable, but worrying given the competitive pressures from Boeing and, to a lesser extent, China’s Comac. A $25 billion bond issue last month helped the former avoid state support, which might have been an impediment to its plan to shed more than 12,000 staff, or nearly 8% of its workforce. Le Maire’s tinkering is unlikely to prevent Airbus executing a similar manoeuvre. (By Ed Cropley)

Horse race. A plum vacancy is opening up in the European Union. Mario Centeno will step down as Portugal’s finance chief and said on Tuesday that he won’t seek a second mandate as chairman of the Eurogroup when his term ends on July 13. Cue jockeying to fill his shoes at the head of the body that represents euro zone finance ministers at a critical time for the single currency.

Candidates must do the job while still serving as national finance minister. That probably rules out contenders from the biggest countries. A calm manner and the ability to build consensus are both handy. But as with all EU jobs, character may play second fiddle to politics. Southern euro zone countries will want one of their own to have the position, and socialist parties will want to hold onto the role. That puts Spain’s Nadia Calviño in a good position. Her Irish counterpart, Paschal Donohoe, will also have his backers.

Centeno’s successor will have their work cut out reconciling bitter differences between euro zone countries. That may not leave much time to reshape the Eurogroup into a more important force than it is. (By Swaha Pattanaik)

Benson & unHedges. Covid-19 lockdowns are taking away tobacco’s last refuge. American Spirit maker British American Tobacco warned its revenue would grow 1%-3% this year instead of its previous guidance of 3%-5%. Stricter-than-expected lockdowns in South Africa, Argentina and Mexico explain some of the decline. Shares fell almost 3%, narrowing the gap with industry laggard Imperial Brands, which now trades at a 34% discount.

Tobacco companies have typically been a hedge against bad times. But even when lockdowns end, consumers are likely to trade down to cheaper brands. BAT boss Jack Bowles’ plan for mid-single digit earnings per share growth, faster than the top line expansion, is therefore going to be tougher to achieve even as he accelerates the cost cutting announced last year. Big tobacco’s reliance on jacking up prices to drive growth has eroded its counter-cyclical appeal. (By Dasha Afanasieva)

Partly sunny. The battle for China’s cloud computing supremacy is intensifying. E-commerce titan Alibaba on Tuesday announced bold plans to recruit 5,000 people in less than a year to fill positions in network database, servers, chips and artificial intelligence. The hiring spree follows the company’s earlier initiative to invest $28 billion over the next three years in its technology infrastructure. As Covid-19 upends traditional brick-and-mortar business models, and work-from-home plans escalate, companies across the People’s Republic are adopting new software and other digital upgrades faster than anticipated. Alibaba Cloud now reckons the trend has accelerated from the previously expected three-to-five-year time frame to within one year.

Recurring theme. Add Britain’s $8.5 billion low-key tech star Aveva to the list of companies hoping to benefit somehow from Covid-19. The Cambridge-based maker of industrial software on Tuesday reiterated its operating margin target of 30%, compared with 26% in the 12 months to March. Sales grew 9%. Chief Executive Craig Hayman reckons manufacturing and energy groups need his digital products more than ever.

Investors are buying it. Hayman’s group trades at 41 times forward earnings, more than French peer Dassault Systemes’ 39 times and Aveva’s majority shareholder Schneider Electric’s 21 times. A shift towards recurring sales such as subscriptions and IT maintenance contracts, which now account for 62% of revenue, means customers probably won’t just flee amid the economic chaos. Sometimes the hype is justified. (By Liam Proud)