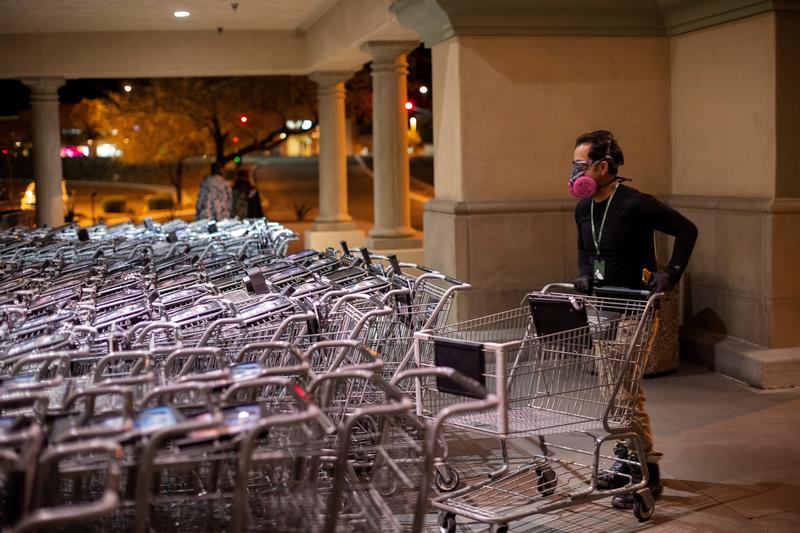 Stocking up. Instacart is growing during the Great Lockdown, but like pantry-stocking, it might not last. The grocery-delivery company said on Thursday that it raised $225 million in a financing round led by DST Global and General Catalyst – valuing it at a chunky $13.7 billion. It’ll use the funds to expand its advertising arm, Reuters reported, among other things like investing in health and safety measures for workers, who have gone on strike over pay and workplace safety.

The new deal is a big step-up from Instacart’s last funding round, which valued it at almost $7.9 billion in 2018. One reason might be that the company’s orders have surged during the pandemic as shoppers stay home. Instacart faces the same roadblocks as other fast-growing gig-economy firms, though: regulation and competition, including from big retailers like Target and Walmart. It’s smart to fill its cart now, in case things get tougher later. (By Amanda Gomez)

Arrivederci Italexit. The Swiss franc is usually a handy barometer of euro breakup sentiment. Right now, it’s suffering. The Alpine currency has lost about 4% against the single currency since Paris and Berlin on May 18 backed a plan to shower grants and loans on Covid-19-hit nations.

Some speculators had seen the pandemic as the final straw for the bloc. Yet a wall of money from the European Central Bank and from a European Union fiscal plan has revived the euro and compressed government bond yields. The spread between 10-year Italian BTPs and German Bunds, an indicator of euro zone divergence, is hovering at 185 basis points, nearly 150 bps below a March pandemic peak and levels seen when a previous eurosceptic executive ran the show in Rome.

Hammer time. Airlines’ corporate egos are being beaten into the ground. Following last week’s unceremonious ejection of Deutsche Lufthansa from Germany’s blue-chip DAX index, British Airways is being forced, almost literally, to sell the family silver. Prized works from its collection of “Britart” luminaries like Damien Hirst and Bridget Riley are being auctioned off to raise funds. As struggling Deutsche Bank proved in February, splashing the cash as a patron of the arts paints a poor picture when you’re laying off thousands of workers.

At least one of the works set to go under the hammer has been valued at over 1 million pounds. Symbolism aside, that’s not much help to British Airways parent International Consolidated Airlines. The group, which also includes Spain’s Iberia and Ireland’s Aer Lingus, is burning through 178 million pounds a week. Or, if you like, two and a quarter diamond-encrusted skulls. (By Ed Cropley)

Bulge bracket. Britain’s expanding waistline is a boon to health stocks. Confined to their homes and with gyms shuttered, punters have turned to excess booze, cigarettes and drugs in lockdown. The combined toll is 62 tons of extra weight across Britain, according to a poll from Findoutnow. The extra heft of almost three pounds per person is equal to an annualised gain of a stone.

Diet makers and insulin stocks are the natural winners from the glut. Given pandemic-induced weight gain is a global problem, it’s no surprise to see Danish diabetes treatment maker Novo Nordisk’s stock up nearly 20% from the height of the crisis in March. Meanwhile, shares in WW International, formerly Weight Watchers, have doubled in the same period. (By Aimee Donnellan)

Offside flag. Paris Saint-Germain’s Neymar da Silva Santos Junior had better prepare for a pay cut. The hit to football clubs’ revenue as Covid-19 closed stadiums across Europe is well known. But their financial pain is being made worse by pay inflation. Wages in Europe’s top five leagues rose at a faster rate than income last season. Deloitte reckons players such as the French club’s Brazilian forward and Barcelona’s Lionel Messi ate up 63% of teams’ collective $19.3 billion of sales earned during 2018/19 as salaries rose by $1.1 billion.

Worse lies ahead. Factor in lost matchday revenue from shuttered stadiums – which ordinarily generates 10%-15% of team takings – and wages this season could balloon to over 71% of sales, even if they remain flat. Italy’s Serie A and France’s Ligue 1 are already collectively in the red, Deloitte reckons. As more clubs are forced into operating losses, players’ salaries will have to come down. (By Christopher Thompson)

High fidelity. At least one retailer is benefiting from the work-at-home movement. Electronics vendor JB Hi-Fi delivered a virus-defying trading update on Thursday for its Australian namesake stores, even as it wrote down the value of its New Zealand business. The $3.4 billion company said sales in its home market grew 20% in the first five months of the year. It also projected an 11% total top-line increase for the year through June and as much as a 22% gain in net profit, an impressive show of operating leverage under the circumstances.

Cloistered consumers ordered more than just office kit. Sales at JB Hi-Fi’s appliances chain The Good Guys jumped, too. One lingering question is whether many of these purchases were simply brought forward by the pandemic. Investors hardly seem worried. After a sharp six-week tumble to late March, the shares have surged 70% to back near their all-time high. (By Jeffrey Goldfarb)

Mubadala’s millions. The $232 billion Abu Dhabi sovereign wealth fund had a decent 2019. Total comprehensive income more than quadrupled from the previous year to $14.4 billion, as it prepared for a potential slowdown by reducing its holdings on long-term investments like Spanish oil group Cepsa. The preferred share nature of the majority of Mubadala’s $15 billion punt on the Vision Fund offset falls in the value of the SoftBank Group entity’s investments.

It will be hard to repeat the trick in 2020. Aside from the impact of Covid-19 on its own investments, Abu Dhabi may have to step in to bail out its ailing neighbour Dubai, as it did a decade ago. While Dubai denies it, investments by Mubadala could be part of the mix. Moreover, some 43% of the fund’s portfolio is now exposed to potentially riskier private equity, a high level for a wealth fund. Mubadala’s next annual review might wind up looking a bit less cheery. (By George Hay)

Instacart employee Eric Cohn, 34, picks out a cart outside a Fry's grocery store while wearing a respirator mask to help protect himself and slow the spread of the coronavirus disease (COVID-19) in Tucson, Arizona, U.S., April 4, 2020.