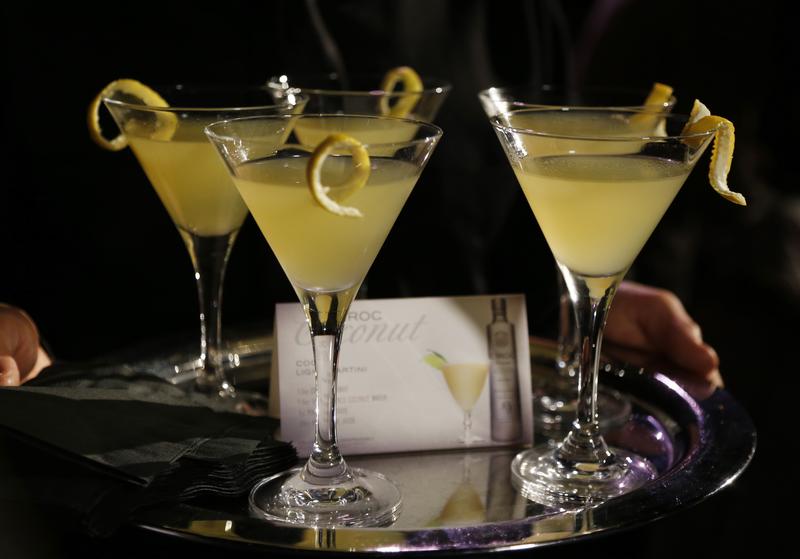 Big Brother’s last stand. U.S. Trade Representative Robert Lighthizer wants to tax one of pandemic life’s last remaining joys: martinis. According to a notice published on Tuesday night, the office wants to add $3.1 billion in new tariffs on goods coming from the European Union and the United Kingdom. It will include taxes on olives, gin and vodka.

The Covid-19 virus has put many vices in limbo. Gambling at casinos has been crippled as baccarat tables from Macau to Atlantic City are shuttered. Sex workers are struggling to make ends meet; a group of UK-based researchers recently made a plea to include prostitutes in public financial-aid measures. Even the drugs trade has had its share of pressures due to the virus, Reuters reported.

Higher levies on alcohol tend not to impact sales much, so they may add some cushion to Uncle Sam’s pockets. But it really dents the spirit for those seeking a drop of lockdown relief. (By Lauren Silva Laughlin)

No Yanks, thanks. The European Union’s eagerness to reopen this summer may not extend to American travellers. The New York Times on Tuesday reported that the bloc may include the United States in its draft list of unwelcome visitors, due to the country’s failure to control the pandemic. That would be a big, but not fatal, blow to European cities and beach resorts. U.S. travellers accounted for 5.1% of international arrivals in the EU in 2019, spending $33.4 billion, Tourism Economics data shows.

The United States has more to lose. In March, when Covid-19 cases were rising in Europe, President Donald Trump angered EU officials by banning most of the continent’s citizens from entering the United States. European travellers account for a fifth of the country’s international arrivals, spending $55.5 billion in 2019. Cancelled business trips will be hard to replace. For holidaymakers on both sides of the Atlantic, a staycation might be the best plan. (By Karen Kwok)

Promises, promises. T-Mobile US and Sprint have jumped through so many hoops to get approval of their $32 billion deal. The California Public Utilities Commission – and Covid-19 – threaten a new snag. T-Mobile is asking the Golden State to modify a pledge to hire 1,000 workers, part of the promises it made to get approval of its deal, according to Bloomberg. That would mean T-Mobile would be forced to expand its workforce just as the state has forced a shutdown of businesses.

Shares of the Deutsche Telekom-controlled firm are up more than a third year-to-date, and SoftBank Group, a big owner of shares, is selling a portion while the getting is good. It suggests that the company can both reap deal benefits and adhere to promises made for the public benefit. Still, asking a company not to cut jobs is one thing. Asking for jobs increases is another, especially as cases of the coronavirus are rising in California. (By Jennifer Saba)

Evolution, whose games include the “Wheel of Fortune”-inspired “Crazy Time”, will struggle to make much money. The probable return on invested capital in 2022, including cost savings and using analyst estimates gathered by Refinitiv, is a measly 6%, according to a Breakingviews calculation. Shareholders share the gloomy assessment of boss Martin Carlesund’s deal, knocking 10% off Evolution’s value on Wednesday. (By Liam Proud)

New kid. Alibaba is the latest to enter China’s increasingly crowded online classroom. The e-commerce giant’s Taobao marketplace plans to connect 100 million students with education service providers offering live-streamed classes in languages and other subjects over the next three years. School closures and pandemic disruptions have forced teachers and students online: between January and May, searches on Taobao for educational resources nearly doubled from the same period last year, according to Alibaba.

Competition for market share, which local research firm iiMedia forecasts will grow 12% this year to over $60 billion, is intensifying. Listed outfits include the $26 billion TAL Education, whose stock is up over 40% this year. Upstarts are moving quickly to capitalise on new Covid-19 opportunities. In March, Tencent-backed Yuanfudao raised $1 billion at a $7.8 billion valuation. Getting to the top of the class will be a long slog for all. (By Robyn Mak)

Nectar of the gods. Wine merchants have had a lucrative lockdown. While many shops, including UK off-licences, were forced to shut their doors, that encouraged couchbound punters to stock up on cases of Malbec and Chardonnay via the internet. Beer-and-wine supplier Rebellious Goods said its average order was three times the size of pre-virus levels.  Online wine subscription company Naked Wines also reported an 81% burst in sales in April and May.

Investors are benefitting from the splurge. Naked Wines’ shares are up 70% since the beginning of the year, outperforming booze king Diageo as well as the UK stock market. The risk is that as restaurants, bars and off-licences reopen there are fewer reasons to drink at home. Naked Wines is also concerned about a recession which may lead consumers to cut back. The wine boom may soon run out of juice. (By Aimee Donnellan)

Squeeze harder. Japan is struggling to get its massive stimulus package out. It’s supposed to be worth nearly $2 trillion, or two-fifths of GDP, but the government can’t seem to write the cheques fast enough. The government has admitted that 40% of cash targeted for handouts to households hasn’t been delivered. Subsidies and loans to businesses are worse, with only 14% disbursed for small company support and a parlous 6% of payroll maintenance subsidies.

It’s unsurprising that an unprecedentedly large headline stimulus package is running into tight bottlenecks, especially in Japan. The cash intensiveness of the society, and necrotic state of the banking system, practically guarantee that direct cash disbursements would proceed in lumpy fashion. It’s a political embarrassment for Prime Minister Shinzo Abe, and a big economic risk if he can’t sort it out. (By Pete Sweeney)