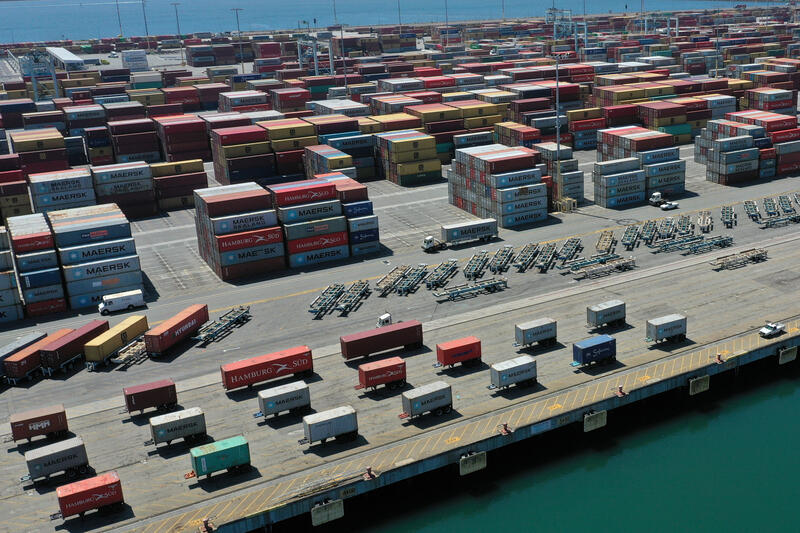 Shipshape. U.S. seaborne imports have navigated through this year’s choppy pandemic waters. November shipments were up over one-fifth year-over-year, according to data from S&P Global Ratings. With homebound consumers unable to spend on travel and events, they instead loaded up on physical goods like appliances, furnishings and fitness products. As a result, the 2020 haul thus far is roughly the same as at this time last year.

All of these American shoppers have helped China’s economic rebound. Last month’s jump in seaborne imports is mostly a result of the over 30% increase in Chinese shipments, following a similarly robust spike the previous month. Beijing’s overall exports in dollar terms jumped 21% last month, far more than economists expected, leading the country to post its highest recorded trade surplus. President Donald Trump, who pledged to dramatically change the U.S. trade relationship with China, has yet another reason to be upset about November’s results. (By Anna Szymanski)

Zoom ready. Stitch Fix has got things sewn up. The online personalized shopping service said on Monday that revenue for the three months ending Oct. 31 rose 10% from a year earlier to just over $490 million. Chief Executive Katrina Lake said the number of clients using its services hit new peaks. So did the company’s shares, which zipped up 45% in early morning trading on Tuesday to a record high above $51. That means Stitch Fix is now worth more than $5 billion.

While retailers like J.C. Penney, J. Crew, Neiman Marcus went through bankruptcy this year, those specializing in e-commerce have sparkled during the pandemic. And Stitch Fix’s service of putting outfits together for customers makes the process even more seamless for those who are stuck at home and have to be camera-ready at a moment’s notice. (By Jennifer Saba)

Dig deeper. Kaz Minerals’ biggest shareholders are doubling down. After minority shareholders slammed Chairman Oleg Novachuk and director Vladimir Kim’s 3 billion pound takeover offer for the London-listed miner as too low, the potential acquirors have changed the structure of the deal.

Novachuk and Kim originally proposed a scheme of arrangement, which requires approval from 75% of shareholders, excluding their 39% stakes. The new structure, a conventional takeover, means the acquirers could in theory set a lower acceptance condition of only 75% of all shareholders to delist the group, including their own stakes. Dissenting investors may also be able to hold onto their stock even if the takeover goes ahead. In practice, owning a stake in a private company with few protections may be unappealing.

Kaz stock fell almost 2% to 645 pence, implying a deal at the 640 pence offer is a little more likely. But amid a vaccine-led stock recovery, Novachuk and Kim may still have to pay up. (By Dasha Afanasieva)

Test and trace. Qiagen is enjoying a pandemic booster shot. The $11 billion German diagnostics group on Tuesday raised its revenue forecasts, predicting net sales growth of 22% this year, and between 18% and 20% in 2021. The group, whose products include rapid antigen-based coronavirus tests, also said it would expand its supervisory broad from six members currently. Qiagen’s “non-Covid” business is expected to see double-digit net sales growth, the company said.

The positive results partly vindicate investors who rejected a bid from Thermo Fisher Scientific in August, led by Davidson Kempner Capital Management. Qiagen originally agreed to that deal in March, just as the virus began sweeping through Europe, dramatically increasing demand for tests. Yet, at around 41 euros, Qiagen’s share price is still below Thermo Fisher’s raised offer of 43 euros per share. That means Chief Executive Thierry Bernard needs good results to keep coming. (By Neil Unmack)

Reanimator. Japan’s third-quarter GDP growth was revised upward slightly to 22.9% on an annualised basis. Household spending increased for the first time this year in October, but only by 1.9% and fell short of expectations while Covid-19 infections have resurged. That made it logical for Prime Minister Yoshihide Suga to roll out extra support on Tuesday. His $700 billion package, over half of which is fresh spending, brings the total to nearly $3 trillion. It includes initiatives to cut carbon emissions and boost adoption of digital technology.

It’s hard to impress investors with big stimulus numbers these days. The question is whether Suga can translate them into private investment that will let the Bank of Japan slow the monetary pump. Net exports and private consumption were the biggest economic drivers last quarter; capital expenditures contracted further. Revived demand is an unqualified good, though, and a vaccine should buy Suga more upside. (By Pete Sweeney)

Hot air. Private equity firm EQT is taking advantage of undervalued stocks. It bought almost 30% of the shares and 26.4% of the voting rights in Swedish air conditioning company Beijer Ref from U.S. heating and ventilation company Carrier Global, making it its biggest shareholder.

The Swedish buyout group said on Monday it paid $1.1 billion for the shares, implying a price of around 244 Swedish crowns ($29) per share. That’s a 20% discount to Monday’s closing price, and roughly in line with where Beijer Ref was trading in late October, before the vaccine-led market recovery. It’s not a classic buyout, as EQT will not be able to fully control the $4.6 billion group, but with private equity firms flush with cash, unorthodox deals can still be a breath of fresh air. (By Dasha Afanasieva)

Containers are seen on a shipping dock, as the global outbreak of the coronavirus disease (COVID-19) continues, in the Port of Los Angeles, California, U.S., April 16, 2020.