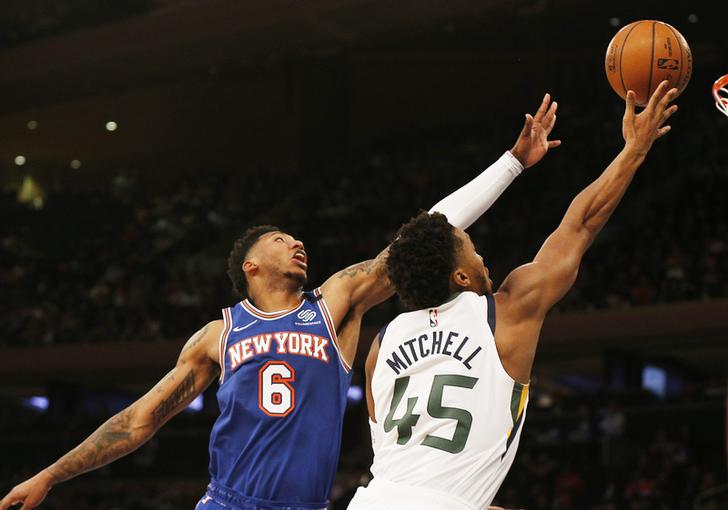 NBA IRR IRL. Technology entrepreneur Ryan Smith is buying the Utah Jazz for $1.7 billion, according to news reports. Other National Basketball Association franchises have changed hands for north of $2 billion – a habit started by former Microsoft boss Steve Ballmer’s purchase of the Los Angeles Clippers in 2014. The Jazz, however, ranks only No. 21 on Forbes’ annual list and is valued by that publication at $1.6 billion, far below the top-ranked New York Knicks at $4.6 billion. And it comes amid Covid-19 challenges for the NBA and all other sports.

The sellers won’t be complaining. The Miller family bought half the franchise in 1985 for $8 million and the other half in 1986 for $14 million, per the Wall Street Journal. Over 35 years, ignoring additional investment or distributions, the Millers have made a 13% annualised return. That sounds less jazzy than saying they are making 75 times their purchase price, but it beats the S&P 500 Index, even including reinvested dividends. (By Richard Beales)

Strutting. Comcast said on Thursday that it had its best broadband results in the company’s history, adding 633,000 high-speed internet customers for the third quarter. That’s well above Wall Street’s forecast of about 534,000 net additions. This gave Chief Executive Brian Roberts, who is under pressure from activist investor Nelson Peltz, the opportunity to emphasize his “integrated strategy” of pipes and content. Peacock, the company’s streaming video product, has had some 22 million signups since its launch in July, boosted by more people taking broadband.

That helps take the sting out of the other aspects of the business. Comcast is suffering from cord-cutting – it lost 273,000 video customers, and the theme park unit is challenged by the pandemic. Revenue there fell by more than 80%. Still, Comcast’s stock jumped almost 3% pre-market, suggesting shareholders are open to Roberts making his case. (By Jennifer Saba)

Cheese wheel of fortune. Kraft Heinz keeps riding the stay-at-home wave. The $36 billion packaged food and drink manufacturer pulled in $6.4 billion in third-quarter sales – a 6% year-over-year jump that beat analysts’ estimate, according to Refinitiv. Its competitors, $22 billion Kellogg and $36 billion General Mills, have also benefited from Americans choosing ready-to-eat cooking over restaurants. But the ketchup maker’s 9.8% U.S. retail-store sales spike over the past 12 weeks has outpaced them all.

The revenue beat may be a pandemic mirage. A jump in pricing was the major driver – and that was partly to offset higher dairy costs, which cut into earnings. And the firm, whose credit rating fell to junk earlier this year, still has debt well over 4 times annual adjusted EBITDA. So Kraft may find itself in hot water yet again if consumers grow tired of boxed meals by the time a vaccine rolls out. (By Anna Szymanski)

Shot in the arm. As drug companies scramble to develop a vaccine for Covid-19, they’re getting a booster shot from other inoculations. Demand for winter flu jabs on Thursday allowed French drugmaker Sanofi to boost its 2020 earnings guidance. Vaccine sales were up nearly 14% to more than 2 billion euros in the three months to September. British peer GSK reported a similar surge on Wednesday; sales of its flu vaccine business grew 21% in the third quarter.

Governments around the world are trying to inoculate citizens to avoid a “twindemic” where Covid-19 and seasonal influenza combine to overwhelm healthcare systems. Flu shot demand is also a saviour for drug companies that have seen a sharp decline in cancer treatments and other vaccines like meningitis as people avoid hospitals and seeing their doctor. Sales of Sanofi’s meningitis vaccine declined nearly 27% in the third quarter. At least drugmakers can cheer this flu season. (By Aimee Donnellan)

Holding pattern. Royal Dutch Shell has given bruised shareholders another dividend surprise, but this time one they’ll like. After a two-thirds cut in April, boss Ben van Beurden served up a 4% increase to the company’s third-quarter payout. He also pledged to pay shareholders 20%-30% of operating cash flow once he cuts net debt to $65 billion.

That’s welcome. But despite a 3% share price bump on Thursday, Shell still trades at around half its book value. The payout pledges look like a way to placate investors wondering why the $91 billion group is waiting until February to disclose long-term targets for wind and solar capacity, when BP, Total and Equinor have already set out their visions. The Norwegian group, which on Thursday reported a hefty year-on-year earnings dip, is the only sizable driller to trade above its net asset value. Investors like Equinor’s commitment to financing renewables investment via steadily increasing oil output. Shell needs to show similar ambition. (By George Hay)

Hooked on China. Yet another multinational is chalking up a robust third quarter to the Chinese Communist Party’s handling of the Covid-19 crisis. Volkswagen returned to profitability in the three months ended Sept. 30, saying that “a key driver of this development was China, the Group’s largest single market”. While deliveries in the People’s Republic are down 10% to 2.7 million vehicles in the first nine months of the year compared to 2019, they popped 3% in the third quarter. With this result, VW joins German compatriots BMW and Daimler, both of whom pointed to China as a bright spot in an otherwise gloomy global automotive market. Shareholders may welcome this today, but an increasing China addiction may cost Western companies dearly tomorrow. (By Rob Cox)

Counting chickens. The bucket is only half full at Yum China. An economic rebound on the mainland was strong enough for the $45 billion owner of KFC, Pizza Hut and Taco Bell restaurants to restart paying a dividend after a solid third quarter that included opening its 10,000th location. Even so, comparable sales were 6% lower than a year earlier as varying regional responses to the pandemic led to a “non-linear and uneven” recovery.

Boss Joey Wat’s cautious outlook follows a disappointing Hong Kong market debut in September, which suggests other concerns even with 19 of 22 analysts rating Yum China a “buy” or “strong buy”, according to Refinitiv. The preference is for fast-growing eateries such as hotpot chain Haidilao, whose shares have soared 74% this year compared to Yum China’s 9%, and which trades at more than twice the multiple of expected earnings, despite its lacklustre results. (By Sharon Lam)