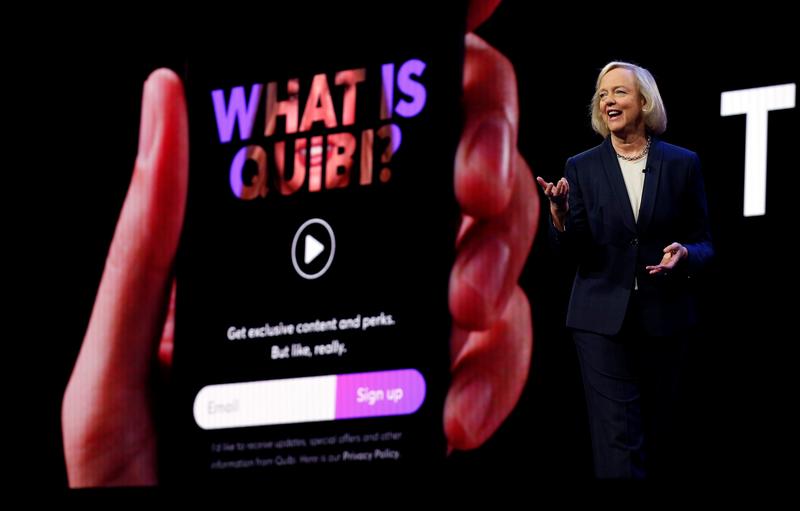 In with a whimper, out with a whimper. Former Walt Disney executive Jeffrey Katzenberg is shuttering Quibi, the streaming service he launched just six months ago with nearly $2 billion in funding. The product was supposed to tap viewers interested in watching videos 10 minutes or less on their phones. Katzenberg and Chief Executive Meg Whitman, the former Hewlett Packard Enterprise chief, said in a letter to employees “our failure was not for lack of trying.”

The two blamed the pandemic and a misplaced product. The latter is probably more to blame. Quibi’s timing should have been pitch perfect when it debuted in April during the height of lockdowns. Ten minutes is like watching a movie on a phone compared to the one-minute limit of the wildly popular TikTok. The price was wrong too: a subscription topped at $8 per month with no ads – more than the cost of Disney+. Throw in the competitive marketplace and it’s a wonder that Quibi even got off the ground. (By Jennifer Saba)

Mickey Mouse vs. California bear. A V-shaped recovery for Walt Disney’s theme parks division is looking less likely. California kicked the reopening of Disneyland and other amusement venues, including Comcast’s Universal Studios, further down the road. The Golden State on Tuesday issued a set of criteria to tamp down the spread of Covid-19. Orange County, where Disneyland is located, is nowhere near checking the boxes.

The Magic Kingdom’s parks are open in other places like Florida and Hong Kong. But the $226 billion entertainment company said last month that it was slashing 28,000 jobs partly because Disneyland’s gates remain shut. The struggles at the company’s theme parks, which reported an operating loss of $2 billion for the quarter ending in June, are one reason Disney’s stock is lagging too. Shares are down 13% year-to-date versus a 6% bump in the S&P 500 Index. Investors are wishing on a star for better days. (By Jennifer Saba)

Phone home. AT&T’s past is helping to prop up its future. The $190 billion U.S. telecommunications company on Thursday reported better-than-expected mobile phone subscriptions, adding 645,000 customers who pay on a monthly basis in the third quarter. Analysts were expecting AT&T to shed 9,000 subscribers during the period. Shares were up nearly 6% in morning trade.

The company’s media business, on the other hand, is a total drag. The satellite pay-TV unit lost more than 600,000 subscribers, so it’s little wonder that AT&T is rethinking the $49 billion purchase it made five years ago. Shuttered movie theaters aren’t helping either, and revenue at WarnerMedia fell some 10%. AT&T, which updated its outlook, said it expects $26 billion in free cash flow this year and a healthy dividend payout. The mobile phone and streaming video landscapes are fiercely competitive, though, and AT&T may want to keep some of its powder dry. (By Jennifer Saba)

The rising Sunak. The United Kingdom’s revamped support scheme may stave off a jobs crisis – for a few months. Finance minister Rishi Sunak on Thursday sweetened his programme designed to keep people in employment, so that anyone who works just 20% of their normal hours will qualify, rather than the original 33%. The government will also pick up more of the tab: it will cover some 61% of the cost of paying employees for hours not worked, leaving companies to shoulder the remaining 5%. Employees forgo the remaining third.

Sunak’s U-turn looks sensible in the face of a second Covid-19 wave. KPMG is expecting unemployment to rise to as high as 11% next year. Yet the UK scheme looks parsimonious next to France and Germany: their furlough schemes are likely to last beyond 2021, whereas the UK scheme’s duration is only until April. With Britain’s abrupt departure from the European Union coming, Sunak still faces a difficult 2021. (By Aimee Donnellan)

Lost race. Adidas is finally running out on Reebok, according to a report in Germany’s Manager Magazin. The Yeezy trainers maker bought Reebok in 2005 for 3.1 billion euros but has struggled to get it moving. At 1.7 billion euros, 2019 sales were broadly what they were in 2015, and far below the $5 billion envisioned after the acquisition.

Chief Executive Kasper Rorsted had resisted investor pressure to sell. But now Covid-19 and the closure of his stores has made turning the ailing brand around even harder. RBC analysts estimate Reebok’s operating margin is close to 0%, meaning a sale could flatter Adidas’s equivalent metric, which was above 11% in 2019. A private equity fund could relish the turnaround, or a Chinese buyer like Anta Sports may help Reebok sell to Asia. Yet, with RBC analysts expecting a sale price as low as 1.1 times sales, or 1.9 billion euros, Rorsted is unlikely to take a victory lap. (By Dasha Afanasieva)

Vaccine jam. AstraZeneca’s vaccine woes could get worse. On Wednesday, Brazilian health authorities said that a 28-year-old volunteer in the drugmaker’s vaccine trial had died. And while testing will continue, it’s another setback to hit the 102 billion pound group. Last month, Chief Executive Pascal Soriot halted testing after a participant fell ill. That trial has yet to fully resume.

Illness and death could make testing harder. In Brazil, the University of Oxford, which is helping to develop the vaccine, only recruited 8,000 of its targeted 10,000 participants. But it also must convince thousands of human guinea pigs to try its vaccine in other markets. This could be difficult when two-thirds of Americans say they’re either not very likely or not at all likely to take a first-generation inoculation. Developing a fast vaccine can be a slow process. (By Aimee Donnellan)

Down the toilet. As pandemic panic buying recedes, shares in loo-paper maker Vinda have lost their shine. The Hong Kong-listed stock plunged some 16% as quarterly results showed revenue was largely flat from a year earlier. Sales of toilet paper were on a tear earlier in 2020, lifting the company’s market value by two-thirds to $4 billion. But as Vinda’s biggest market, China, contains Covid-19, consumers have lost their sense of urgency to hoard tissues and other household staples.

Investors may be panicking too soon. Although the top line didn’t dazzle, further down Vinda was flushed with success. EBITDA grew by nearly a third, helped by corporate customers like hotel chain Shangri-La snapping up napkins and such, as well as by shoppers buying higher-margin products like wet wipes. Vinda’s sparkle can endure even after the pandemic subsides. (By Katrina Hamlin)

Turbocharged. One of the pandemic’s happier unintended consequences is greater energy efficiency. That’s the message from Paris-listed Schneider Electric, whose shares bounced on Thursday after it upgraded full-year targets due to growing “energy management” sales in the third quarter. The $71 billion French industrial group predicted a 6% year-on-year group revenue decline for 2020 versus an original 8.5% drop, implying sales of around 26 billion euros, some 4% higher than analysts’ consensus. Meanwhile, operating margins could grow by 10 basis points rather than contract as previously envisaged.

The doubling down on making buildings – accounting for two-fifths of global carbon emissions, according to Schneider – and thriving data centres more environmentally friendly vindicates CEO Jean-Pascal Tricoire’s focus on energy, rather than industrial automation. Schneider shares have risen by a fifth this year, compared to a decline in France’s benchmark CAC 40 index. A Covid-related spotlight on green issues should help that outperformance continue. (By Christopher Thompson)