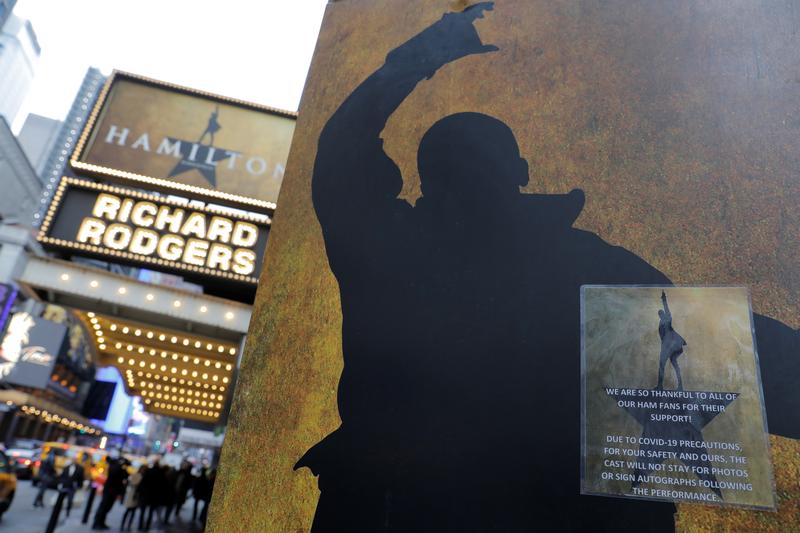 The world’s a (virtual) stage. Lin-Manuel Miranda breathed fresh life into Broadway when his musical “Hamilton” debuted on the big New York City stage five years ago next week. Now the theater business is struggling, but he is putting a skip in Walt Disney’s pandemic step. The movie premiered on Disney+, the company’s streaming service, on Friday. Over the U.S. holiday weekend, people downloaded the app more than 500,000 times, according to Apptopia.

That’s after the popularity of Disney+ declined dramatically since its launch last November. According to UBS research, the app went from taking more than 70% market share of U.S. downloads to roughly a fifth recently. In fact, Netflix’s percentage of downloads has outpaced Disney since March. Its stock has outperformed, too.

Hamilton might help get users hooked on Disney’s new streaming service. But to borrow from one of Miranda’s characters, dying is easy in today’s digital entertainment market. Living is harder. (By Lauren Silva Laughlin)

Bet the house. The last thing people might want to hear after months of lockdowns is that it’s time to concentrate more on the home. That, though, is precisely what analysts at Wall Street firm Jefferies are recommending – from an investing perspective, that is.

There’s logic to it. The American housing market has “plenty of pent-up demand with very lean inventories,” note the bank’s analysts. Some may have decided after months of sheltering in place that they need more space, or that they need to renovate. The prospect of telecommuting at least on and off for the foreseeable future may well reinforce that.

But being bullish also requires making some big assumptions, like the idea that younger adults might now spend more on essentials and less on experiences. Or that a longer-term shift from cities to suburbs is starting – something that may not prove as big an attraction as it seems right now. (By Antony Currie)

End of an era. Sandwich chain Pret A Manger, owned by JAB, is going through a forced reinvention. It will cut at least 1,000 jobs and close 30 stores in the UK in an attempt to stop burning 20 million pounds of cash every month.

With the lockdown and social distancing rules crippling demand from Pret’s traditional mainstay of hurried office workers, Chief Executive Pano Christou is trying to reach new customers by delivering coffee through Amazon.com, or food through delivery service Deliveroo. However, for a company built on fast, friendly service, experimenting with a totally different proposition in already competitive markets is risky and will likely require investment. Christou’s plan to sell more meals at supermarkets could also undermine Pret’s promise to serve only freshly made food. For JAB, which forked out 1.5 billion pounds for the chain in 2018, the new recipe is unlikely to cut the mustard. (By Dasha Afanasieva)

Rodeo clowns. America’s Covid-19 bailouts are throwing up some odd winners and losers. Monty Bennett, a Dallas hotelier and donor to President Donald Trump, recently came under scrutiny for applying for $125 million in Paycheck Protection Program loans for his 13,000-employee business, according to the Dallas Morning News. A few hundred miles to the north, the genuinely small outfits that cater to rodeo horses aren’t doing so well, the Chicago Tribune reports. Big Hat Rodeo, celebrating 100 years in the business, is out $100,000 in income for the year, the paper said.

It’s one example of the imperfect consequences of Washington’s bailouts, even as financial markets overall remain buoyant. Another is last week’s Treasury Department agreement to inject $700 million into trucking company YRC Worldwide. Not only was it an atypical rescue candidate, the government left a lot of money on the table. As more bailouts follow, the U.S. government should be getting better at it. As they say in Texas, this isn’t their first rodeo. (By Lauren Silva Laughlin)

Pre-flight turbulence. With the ink barely dry on Bain Capital’s deal to save Virgin Australia, the Boston buyout shop has already run into problems. The Australian Takeovers Panel said on Monday that Singapore’s Broad Peak Investment Advisers and Hong Kong’s Tor Investment Management, two of the bankrupt airline’s unsecured creditors, have applied to put forward an alternative rescue offer. The pair are also pushing for more information, including the terms of the Bain deal.

Timing is of the essence. Administrator Deloitte warned last week that the airline, whose problems were compounded by coronavirus disruptions, won’t have enough funds to survive until an August meeting – when creditors will vote on the Bain deal. An interim financial lifeline is required. Whether the bondholders have a case or not, the disquiet creates new uncertainties around the rescue. (By Alec Macfarlane)

Splurge again. UK finance minister Rishi Sunak is set to give the economy a further boost on Wednesday, and speculation abounds about his plans. The Guardian flagged a think tank’s proposal to give adults vouchers worth 500 pounds to spend in specific sectors, such as hospitality. That would do more for the economy than mailing out normal cheques, which can be saved. But there are better uses for government funds than giving money to those who are already well off.

Helping young workers enter or stay in the labour force is a good idea. So financing more traineeships, as the finance ministry says Sunak will do, would be helpful. Giving homebuyers a tax break, as reported by The Times, might support the housing market. But delaying the measure until later this year could prompt potential buyers to defer purchases. Consumers will also be aware that today’s largesse will be matched by inevitable payback in the form of higher taxes. (By Swaha Pattanaik)

Pandemic pressure. The health crisis is adding urgency to a new round of Italian banking M&A, which formally kicked off on Monday with Intesa Sanpaolo’s all-share offer for reluctant target UBI Banca. After shedding nearly 200 billion euros of bad credit since 2015, local banks entered the emergency with cleaner balance sheets than in the euro zone crisis. Unfortunately, their dud loan problem is about to return.

Up to 15.5% of Italian non-financial companies could go belly-up if a new wave of infections emerges, says local credit manager Cerved. This would result in higher provisions for bad debt, hitting local lenders’ already weak profitability. Teaming up to save on costs is the obvious solution. That’s why Banco BPM is considering a tie-up with state-controlled Banca Monte dei Paschi di Siena. BPER Banca or Credit Agricole-controlled Cariparma may also be tempted to shop around. Whether or not Intesa’s hostile takeover is successful, the consolidation ball is rolling. (By Lisa Jucca)

(This item has been corrected in the first paragraph of the Pret A Manger item to state that the sandwich chain is owned by JAB, not by JAB’s Panera Bread.)

Signage regarding the coronavirus is seen on the stage door to the show Hamilton at the Richard Rodgers theater as Broadway shows announced they will cancel performances due to the coronavirus outbreak in Manhattan, New York City, New York, U.S., March 12,