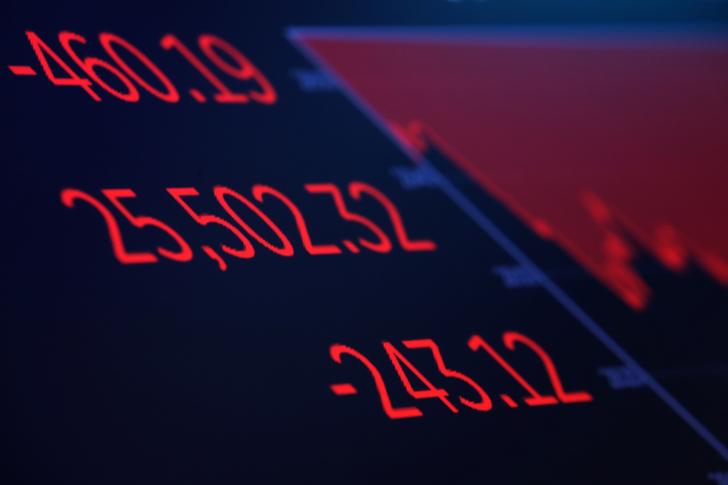 Feel the noise. Global stocks fell on Monday as Covid-19 diagnoses rose. The relationship is simple enough – airlines, cruise-ship operators and oil producers were among the biggest sliders. But next week’s U.S. election is creating confusion.

The problem is a disconnect between present and future. Daily U.S. cases hit a record of almost 68,800 on Sunday, according to Johns Hopkins University. That’s bad for all kinds of businesses. But the start of a new presidential term next year could bring major stimulus. BlackRock downgraded its view of U.S. Treasuries on Monday, saying that if Democrat Joe Biden beats Donald Trump and Biden’s party also wins control of the Senate, the administration would spend “several percentage points of GDP” more each year than if the upper house remains Republican.

Meanwhile, more than one-quarter of S&P 500 Index companies have reported fall-quarter earnings, according to Refinitiv, and more than 80% beat analysts’ profit estimates. The election result may clarify some things, but mixed messages will remain. (By John Foley)

End of an era. Around 78% of Chileans voted on Sunday to toss out their constitution dating from the dictatorship of Augusto Pinochet in favor of a new charter that will be created by a citizen-led constitutional convention. Although the Covid-19 pandemic caused the vote to be postponed from April, it didn’t dampen voter participation. Around half of eligible voters turned out, according to Reuters, the best turnout since voluntary voting began in 2012.

The new constitution may lead to more government spending. And the economy should shrink by around 6% this year, according to the International Monetary Fund, making this harder moving forward. But the process will take well over a year. And decades of orthodox economic policies have left the government with gross debt to GDP of only around 30%, according to the IMF. In the post-coronavirus world, investors may have to accept that the era of small governments may be over. (By Anna Szymanski)

Wave after wave. Everyone may be tired of Covid-19, but the accelerating pace of new infections across the northern hemisphere doesn’t allow for feelings. France’s health ministry said on Sunday that there were 52,000 new cases in 24 hours. High rates of positive tests suggest that other cases are not being tested for, and the real figure could be perhaps twice as high. Scaled up for population, that would be equivalent to nearly 500,000 cases in the United States, where the latest daily figures are currently under 100,000.

There’s a thin silver lining: The resurgence of coronavirus infections could speed up vaccine timelines. There are already 44 candidates in clinical trials, including those developed by Pfizer, Moderna and others, according to the World Health Organization. Increased fear will help encourage the tens of thousands of volunteers needed for each late-stage vaccine trial. And more sick patients make it easier and faster to see which therapies work. It’s important to look for the light at the end of the tunnel, however faint. (By Robert Cyran)

Grounded meal. Mention in-flight food to most air passengers and they will think of tinfoil-wrapped pasta and frozen bread rolls. But lockdown-weary travellers are getting nostalgic. Finnair has started selling business class-inspired ready meals in supermarkets as it strives to keep staff employed during the downturn. Selling for around 12 euros ($15) apiece, some 1,600 Finnair meals were sold during the first weekend.

The Finnish flag carrier isn’t the only airline to think up creative new business lines. Besides offering flights to nowhere, Australia’s Qantas has sold premium pyjamas. Thai Airways and Singapore Airlines launched aviation-themed restaurants. Yet the return from such ventures looks modest. Finnair sold some 12,000 meals a day before lockdown. And it said in its last quarterly update that it made an average 2 million euro loss each day in the three months to the end of June. Plugging that would require a lot of ready meals. (By Karen Kwok)

From V to W. Europe’s economic recovery is faltering under a new wave of coronavirus restrictions. Italy and Spain on Sunday became the latest countries to reimpose lockdown measures to halt the spread of Covid-19. The government in Rome ordered bars and restaurants to close at 6 p.m., while Spanish Prime Minister Pedro Sanchez announced a state of emergency that includes nighttime curfews and travel restrictions.

As in other European countries, the new measures are a setback for pandemic-stricken service industries. They could also prompt some European economies to shrink again. The European Central Bank in September projected that euro zone GDP would still expand in the fourth quarter, even in the event of a serious new outbreak. But economists at RBC now think the euro area will shrink slightly. Their counterparts at Nomura expect economic output in the United Kingdom to contract in the next two quarters. The hoped-for V-shaped recovery is beginning to look more like a W. (By Peter Thal Larsen)

Promotion for punters. British retail investors are getting an endorsement from the London Stock Exchange. The bourse’s parent company on Monday said it’s investing in financial technology startup PrimaryBid. The UK-based group provides a way for smartphone-carrying retail investors to find out about imminent cash calls by companies in which they hold stock, enabling them to buy in if the company has made arrangements.

The solution has proved popular during the pandemic because many cash-strapped firms rushed to raise capital quickly, bypassing the time-consuming process of offering retail shareholders the opportunity to buy in. Companies including Ocado, Taylor Wimpey, William Hill, and Compass used PrimaryBid to access smaller investors.

A screen displays the Dow Jones Industrial Average after the closing bell on the floor of the New York Stock Exchange (NYSE) in New York, U.S., March 20, 2019.