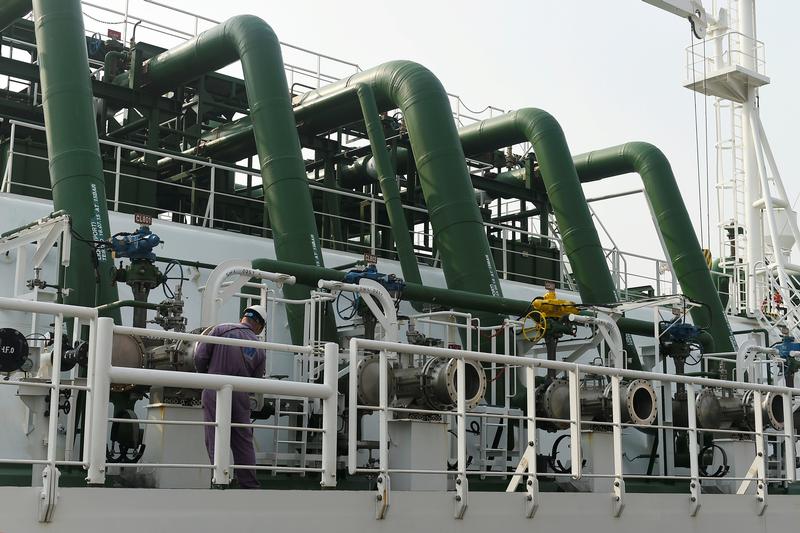 China’s leading liquefied natural gas importer claims the coronavirus has made fulfilling its contracts impossible. This might not pass legal muster – but the desperate measure shows just how weak Chinese demand might be. The unbalanced LNG market is in trouble.

FILE PHOTO: A worker works on a liquefied natural gas (LNG) tanker at a port of the China National Offshore Oil Co (CNOOC) in Tianjin, China November 6, 2017. REUTERS/Stringer/File Photo ATTENTION EDITORS - THIS IMAGE WAS PROVIDED BY A THIRD PARTY. CHINA OUT. - RC2VUE9OFQOE

China National Offshore Oil Corporation has declared force majeure with at least three suppliers of liquefied natural gas because of the coronavirus, Reuters reported on Feb. 6. This legal clause enables a company to suspend its obligation to fulfil a contract because of unforeseen events, like strikes, natural disasters or wars. The notice would cover the energy giant’s LNG purchases for February and March, according to Reuters.

A Total executive said the company had rejected a force majeure notice from a Chinese LNG buyer on Feb. 6. It did not disclose the name of the buyer.

Platts Japan Korea Marker is the LNG benchmark price used for spot physical shipments in Asia. It was around $3.15 per million British Thermal units on Feb. 5.

The death toll from a coronavirus outbreak in mainland China had risen to 908 as of the end of Feb. 9, the National Health Commission said on Feb. 10.