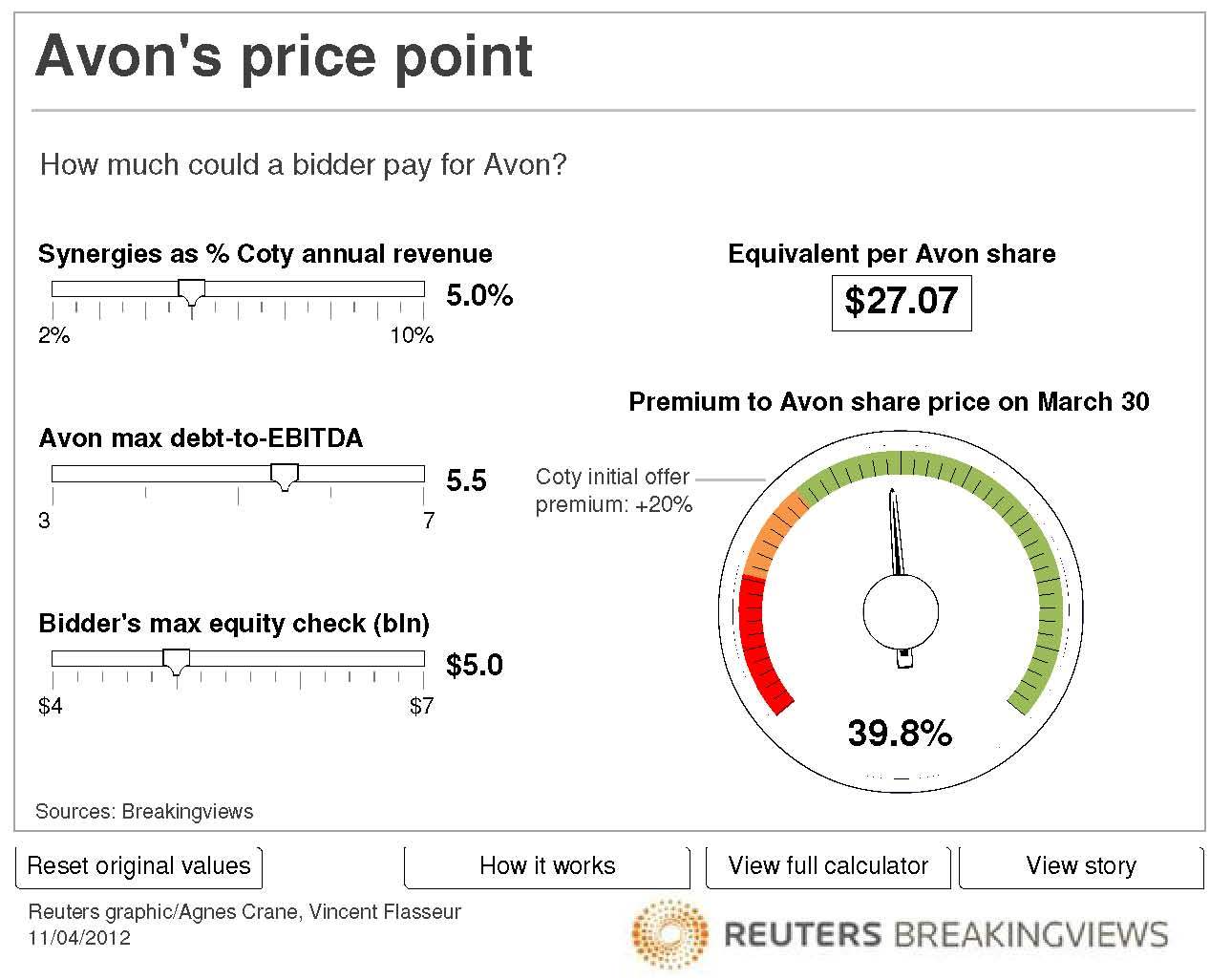 Coty is going to need a bigger ring. Avon Products has rejected its $10 billion marriage approach, and the company this week hired a formidable new chief executive, Sheri McCoy. That rams home the point that Avon would rather go it alone than sell itself short. A new Breakingviews calculator shows just how much bigger Coty’s proffered engagement ring could be.

Coty, the maker of fragrances like Baby Phat, indicated it was willing to pay $23.25 a share, a 20 percent premium over Avon’s beaten-down stock price the Friday before the offer was made public. Avon’s shares have traded much higher even in the past year. The emergence of another possible suitor – privately-held U.S. investment firm Richmont Holdings, whose founder tried to take over Avon in the 1980s, is interested, according to Fortune – could mean even more pressure on Coty to raise its bid.

A lot depends on how big an equity check Coty can write for a deal that would look a bit like a leveraged buyout. Suppose it can scrape together $5 billion between its wealthy owners, the Reimann family, and banker Byron Trott’s connections, who include Warren Buffett. Then assume Coty could borrow a fairly hefty 5.5 times Avon’s $1.4 billion of estimated 2012 EBITDA, increased by potential synergies at 5 percent of the smaller Coty’s $4.5 billion of annual revenue. That’s $8.7 billion of total debt. That would allow Coty to hike its offer to just over $27 a share, doubling the premium to 40 percent.

Even that might not be enough to turn the heads of Avon’s directors. The juicier premium would still fall short compared to other deals in the beauty sector, based on the deal’s enterprise value-to-EBITDA ratio.

If Coty got into a bidding war, more equity or an even more aggressive debt ratio could allow it to raise its price. But it might not find that to be worth it. Initially, the company was considering being acquired by Avon rather than the other way around – a move that would have reversed it into a U.S. stock exchange listing. Coty may yet find that its most promising wedding party includes public equity markets, not private ones.

Richmont Holdings, a former Avon Products shareholder, is preparing a takeover offer for the company, according to Fortune Magazine.

Avon said on April 10 that it will pay its new CEO, Sherilyn McCoy, three times her annual salary if there’s a change of control within two years of her taking office, which is set for April 23.

How much could a bidder pay for Avon?

Richmont Holdings, a former Avon Products shareholder, is preparing a takeover offer for the company, according to Fortune Magazine.

Avon said on April 10 that it will pay its new CEO, Sherilyn McCoy, three times her annual salary if there’s a change of control within two years of her taking office, which is set for April 23.