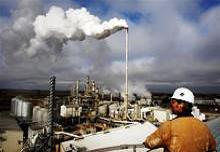 U.S. rules force refiners to mix more of the stuff with gasoline – or pay not to. That has quickly become expensive and is likely to get worse, crimping gasoline and diesel supplies, jacking up prices and burning $160 bln in consumers’ wallets. It’s time for Congress to act.

A process operator looks at a general view of the GreenField Ethanol plant in Chatham, Ontario, April 10 2008. REUTERS/Mark Blinch

The price of Renewable Identification Numbers (RINs), which refiners have to buy if they fail to use enough ethanol to meet U.S. government rules, climbed to a record high of $1.47 on July 16, according to data compiled by energy broker Starfuels. That is up from about 5 cents in December 2012.
On July 24, a RIN, which represents a gallon of ethanol after being mixed into gasoline, was trading at $1.35.
The 2007 Renewable Fuels Standard law requires the refining industry to mix 13.8 billion gallons of conventional ethanol into gasoline and diesel by 2013, up from 13.2 billion this year. This rises to 14.4 billion in 2014 and 15 billion in 2015. Congress put the rules in place in part to help reduce reliance on imported oil.
The industry is also required to use 1 billion gallons of cellulosic ethanol this year. Currently there are no commercial producers of cellulosic ethanol.
Gasoline consumption in the United States fell 6 percent between 2007 and 2012.