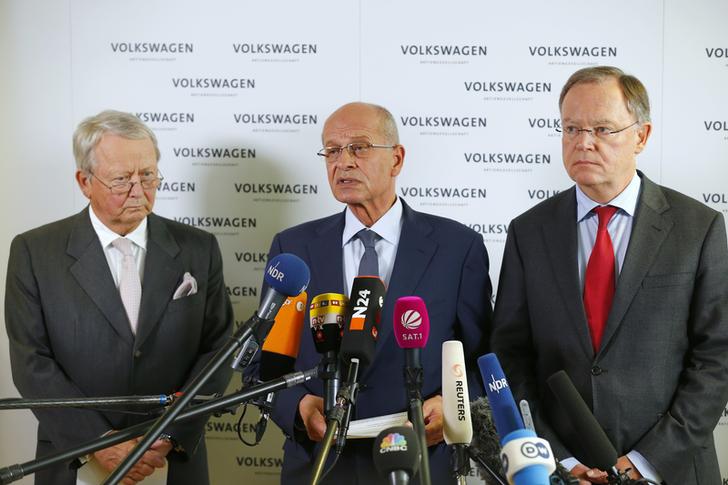 Poetsch may not have been aware that his employer used special software to game regulatory emissions tests. After all, he dealt with spreadsheets in his 12 years running VW’s finances, not diesels. The inevitable storm of fines, damages and recall costs that will now hit the auto giant makes a well-seasoned, respected finance expert an asset.

But as an insider, Poetsch is not well placed for a vacancy on the supervisory board. Even in good times, elevating an executive to that position creates conflicts of interest. That’s why German law decrees a two-year cooling-off period for such transfers, which can only be overridden if 25 percent of shareholders agree.

VW’s next chairman has to supervise an investigation into the cheating scandal as well as a deep reorganisation and cost cuts. This requires questioning every single decision taken by the old regime. Poetsch, who was part of it, does not qualify.

A more fitting replacement would have a clean record, no ties to the Wolfsburg auto group, and an ability to deal diplomatically with U.S. regulators and judges. A background in engineering would help, but experience in crisis management is essential. A non-German boss would be tricky, since unions are powerful at VW and the trust of workers is key.

Wolfgang Reitzle, a former manager at rival BMW and chief executive of industrial group Linde, is a good candidate. But he already chairs recently merged building materials company LafargeHolcim as well as car-parts maker Continental. A plausible alternative could be ThyssenKrupp’s boss Heinrich Hiesinger. The electrical engineer and former Siemens executive has saved the steel and engineering group from bankruptcy, transformed a rotten culture and fought corruption. Or Matthias Wissmann, who since 2007 is the president of Germany’s automotive industry association and earlier served as minster for technology and transport.

The emissions scandal offers a unique chance for a proper fresh start. Wolfsburg cannot afford to squander this opportunity by letting an insider do what is clearly an outsider’s job.

A panel of senior supervisory board members at Volkswagen said it would present proposals on new management appointments by Sept. 25, after Chief Executive Martin Winterkorn resigned on Sept. 23 due to the emissions scandal.

In a statement, the supervisory board’s steering committee also said it expected further personnel consequences in the coming days. “The internal investigation is ongoing,” it said.

Poetsch is supposed to be elected at an extraordinary shareholder meeting that has been scheduled for November. Former Chairman Ferdinand Piech resigned after losing a boardroom battle over the future of Chief Executive Martin Winterkorn. Deputy Chairman Berthold Huber, a senior trade unionist, has taken over as acting chairman until a permanent successor is found.