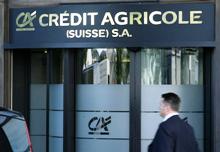 The French bank’s shares slumped 9 pct after it cited Frankfurt’s opposition to a planned structural rejig. While peer BPCE enacted a similar overhaul in 2013, that predates the ECB’s new supervisory remit. Credit Agricole could have done with being less presumptuous.

A man walks past the entrance of the Credit Agricole Bank building in Geneva August 5, 2008. REUTERS/Denis Balibouse

Shares in Credit Agricole fell 9 percent on Aug. 4 after the French lender said the European Central Bank had raised objections to its planned structural reorganisation.

Credit Agricole said its exchanges with regulatory authorities, predominantly the ECB, had “highlighted constraints” to it implementing a change in corporate structure at this stage.

The warning was made as the bank revealed second-quarter net profit that rose to 920 million euros ($1.01 billion) from 17 million euros in the year-ago period.

Credit Agricole booked an extra 350 million euros in litigation provisions, and said that it expected to settle with U.S. authorities over sanctions-busting in the autumn.

By 0834 GMT, shares in Credit Agricole were trading 9.3 percent lower from the previous day’s close, at 13 euros.