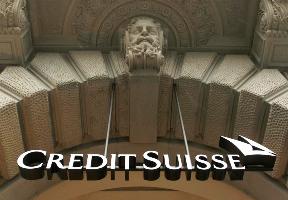 Credit Suisse is still shrinking. The Swiss bank returned to the black in the first quarter, even though revenue was well below the same period of 2011. Cost-cutting helped, and balance-sheet contraction boosted returns. But the bank has more to do to meet tough capital targets. Choppy markets won’t help.

After a painful fourth quarter, earnings of just 44 million Swiss francs for the first three months of the year don’t look like much of a recovery. But strip away the perverse write-down triggered by the rally in the bank’s debt, and the one-off charge from distributing unwanted balance-sheet assets to staff, and Credit Suisse earned 1.36 billion Swiss francs in the quarter. That translates into a respectable 15.9 percent return on equity.

The big question is whether that performance can be sustained. Though the investment bank pulled out of its year-end slump, revenue from fixed income, equities and underwriting and advising on M&A deals were all down from the first quarter of last year. The good news is that the capital base that generated that revenue shrank even more. Take risk-weighted assets assigned to the fixed income division, which has in the past consumed much of Credit Suisse’s balance sheet. These dropped 45 percent year-on-year. Yet revenue here was down just 21 percent.

The disappointment is that Credit Suisse still hasn’t got a grip on costs. Operating expenses in the first quarter were down little more than 7 percent year-on-year, even as underlying revenue across the bank dropped 15 percent. Executives say the cost-cutting programme is on track, and dismiss talk of more job losses. But if the revived euro zone crisis chokes off activity, Credit Suisse – like its rivals – may need to chop further.

Meanwhile, the bank still has work to do to get its capital ratios in shape. If the Basel III regime were applied in full, Credit Suisse’s common equity Tier 1 capital ratio would be less than 7 percent – and still a shade below 10 percent by the end of 2013. The bank’s shares, which were largely unmoved by the results, suggest investors remain to be persuaded that Credit Suisse can thrive in its new environment.

The logo of Swiss bank Credit Swiss is pictured at the company's headquarters in Zurich. Credit Suisse is gearing up to launch its debut issue under its new euro-denominated covered bond programme. The Swiss bank begins its roadshow on November 15 for a benchmark transaction, with a view to launching the deal the following week.

Credit Suisse eked out a small first-quarter profit, as cost cuts and a better-than-expected showing from its fixed income arm cancelled out a 1.5 billion Swiss franc charge arising from the improved value of its own debt.
Net profit in the quarter was 44 million Swiss francs, down from 1.13 billion in the same period of 2011.
The Swiss bank did not add to ongoing job cuts of 7 percent of its workforce, or roughly 3,500 staff, but said it was ahead of a target to cut costs by 1.2 billion francs.
“We are very confident that by executing our strategy consistently, we will be able to deliver our target return on equity of 15 percent or more over the cycle,” chairman Urs Rohner and Chief Executive Brady Dougan said in a joint letter to shareholders. First-quarter return on equity was 0.5 percent, or 15.9 percent when stripping out the debt loss.
The bank said its core Tier 1 capital ratio improved to 11.8 percent at the end of the first quarter, and was on track to hit 13 percent by the end of the year. However, adjusting for the full implementation of new Basel III capital rules, the bank expected its common equity Tier 1 capital ratio to be 7 percent by the end of the year, and 9.8 percent by the end of 2013.
Risk weighted assets in Credit Suisse’s investment bank were $210 billion at the end of the first quarter, down from $312 billion at the end of March 2011.
By 0930 GMT on April 25, Credit Suisse shares were down slightly at 23.51 Swiss francs.