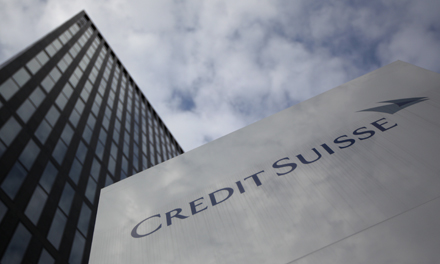 Credit Suisse is hurting. Cost cuts and balance-sheet shrinkage have combined with weak markets to drag the Swiss bank to its first quarterly loss since 2008. Chief Executive Brady Dougan thinks he can get ahead of the pack by restructuring now. But payback still depends on business picking up.

The pain is partly self-inflicted. The bank spent 414 million Swiss francs slashing jobs in the quarter, while businesses it is trying to get out of lost a further 567 million Swiss francs. That includes the cost of offloading mortgage-backed securities at a loss.

The balance-sheet shrinkage won’t end there. Credit Suisse plans to lop another 56 billion Swiss francs, or 17 percent, off risk-weighted assets this year. Some of those assets – though the bank won’t say how many – will be shifted to employees as a form of deferred bonus. Setting up the so-called Partner Asset Facility 2 will trigger another 500 million Swiss franc charge in the first quarter.

Credit Suisse thinks it’s better to shed assets now than later in 2012, when other lenders will face similar pressures. But it is also finding new capital rules particularly taxing. If Basel III was fully implemented, the bank reckons its core Tier 1 capital ratio at the end of 2012 would be just 7.1 percent. Swiss regulators want it to hit at least 10 percent – though not until 2018.

It’s also unclear how much revenue the bank will be able to generate from its streamlined balance sheet. True, business can’t get much worse than in 2011: revenue from fixed-income sales and trading were just 36 million Swiss francs in the fourth quarter, down a staggering 96 percent year on year. And costs will continue to shrink. Though the bank’s total compensation bill fell just 9 percent last year, the figure is distorted by deferred bonuses awarded in previous years. New bonuses were down 41 percent.

Improved market conditions mean Credit Suisse is hitting its 15 percent return on equity target so far this year. But it’s early days. Besides, any sustained improvement will be shared by rivals, which may even find it easier to offload unwanted assets. For now, Credit Suisse’s pain is clearer than its gain.