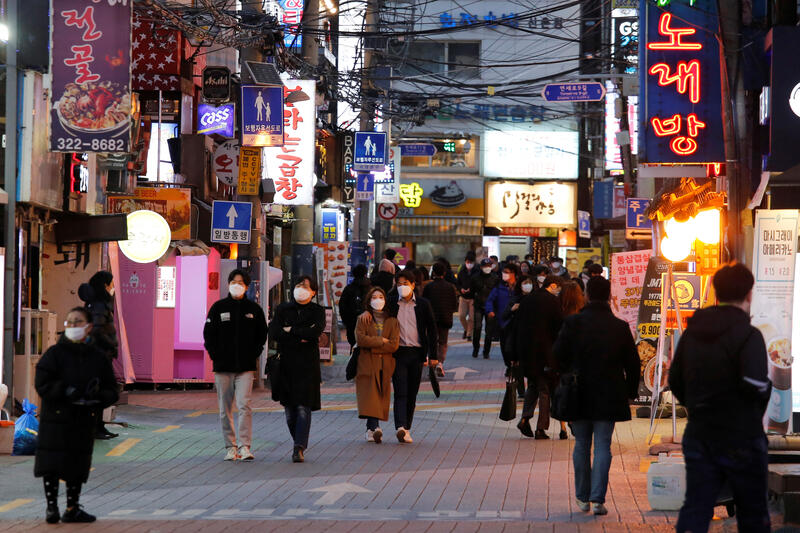 President Moon Jae-in has long wanted to redirect the emphasis from exports to jobs and wages. As the pandemic’s economic toll mounts, his government has unveiled nearly $200 bln of relief measures. Fresh political support could help make the “income-led” growth plan a reality.

People wearing face masks to protect themselves against contracting the coronavirus disease (COVID-19), walk on a street in central Seoul, South Korea April 22, 2020.

South Korea’s gross domestic product decreased by a seasonally adjusted 1.4% in the first quarter from the previous three months, its worst contraction since 2008, the country’s central bank reported on April 23.

Economists polled by Reuters had been anticipating a 1.5% decline.

South Korean exports fell 26.9% in the first 20 days of April from a year earlier, according to data released on April 21 by the Korea Customs Service. Shipments to the country's biggest trading partner, China, fell 17%, even as factories there resumed operations, while those to the United States and the European Union slumped 17.5% and 32.6%, respectively.

President Moon Jae-in's government is preparing a third supplementary budget and an additional 40 trillion won ($32.4 billion) fund to increase subsidies to keep people in jobs and help businesses stay afloat through the course of the coronavirus outbreak, Reuters reported on April 22.